In case anyone still had any respect or interest in the man or his work.

Along with Luckey, Nimble America was founded by two moderators of Reddit&#8217;s r/The_Donald, which helped popularize Trump-themed white supremacist and anti-Semitic memes along with 4Chan and 8Chan. A questionnaire to become a moderator at r/The_Donald posted in March had applicants answer the questions &#8220;Is there a difference between white nationalism and white supremacy?&#8221; and &#8220;Was 9/11 an inside job?&#8221;
Click to expand... 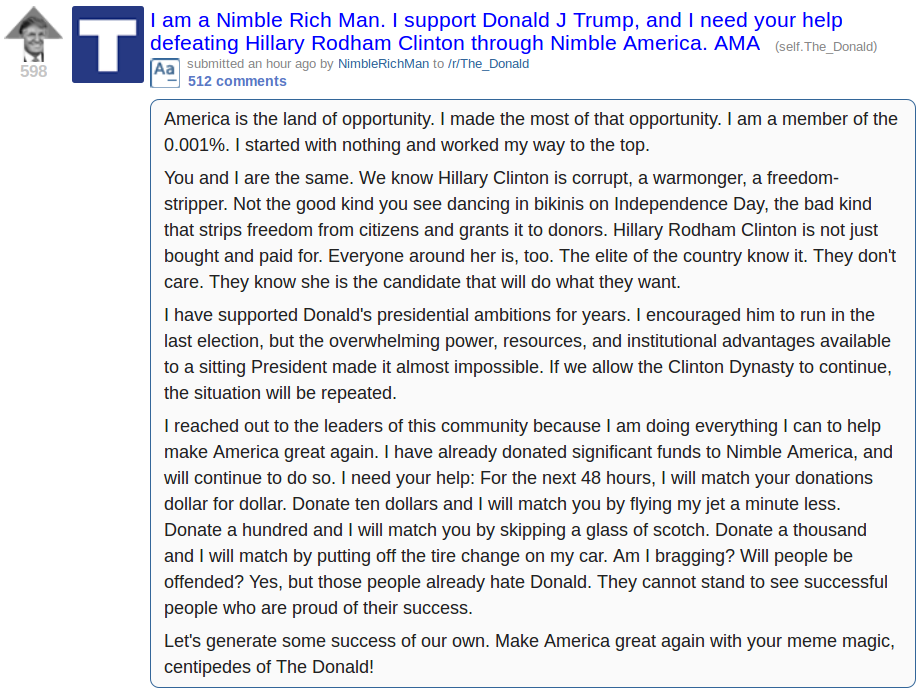 The 24-year-old told The Daily Beast that he had used the pseudonym &#8220;NimbleRichMan&#8221; on Reddit with a password given him to by the organization&#8217;s founders.
Click to expand...

So this is what Milo got backlash from r_donald for a few days back. Wow, would have never thought that NimbleRichGuy is really Palmer.
D

Glad I'll be getting a PSVR anyway.
F

This thread is going to be something to behold. Or it will be locked.

Did we know he was a white supremacist prior to this? Either way, I guess that shuts out the Oculus as a possible VR choice if I ever buy one. Here's hoping the Vive just keeps continuing to grow!
O

The thread title is kinda reaching&#8230; but ok

What an absurd and horrible reason to bring down every colleague you've ever worked with. Grade A shitbag.


Zubz said:
Did we know he was a white supremacist prior to this? Either way, I guess that shuts out the Oculus as a possible VR choice if I ever buy one. Here's hoping the Vive just keeps continuing to grow!
Click to expand...

I'm pretty sure I would have heard about it if it were known before. This is huge (in an awful way)
M

I feel like I read here on GAF that this actually isn't the first time he was caught being involved with some stupid bullshit, but I can't actually remember what the other thing was.

Edit: Ah, right, he favorited a bunch of alt-right garbage on twitter, including a defense of Milo when that human waste got banned from twitter.

Well it's good that I got a Vive
A

Since hearing about this, I've looked for any sort of confirmation - it appears to be a Daily Beast exclusive, so there's not much out there.

If it's true, this is sickening. I always got the impression that he was immature for his age, even when I pre-ordered a Rift... but happier than ever that I sold that off.
B

I thought he sold it off and isn't with Oculus anymore?
G

for those asking, this isn't some misunderstanding. there are quotes in the article
C

Blizzard said:
I thought he sold it off and isn't with Oculus anymore?
Click to expand...

You should put this in the OP too, Jon:

That's insane. What a disgusting man.
He'll never get a dime from me.
L

I had no real opinion on the guy before, but I certainly do now.
T

Easy to pass on a Rift now at least.

What a POS
S

And yes, the Vive is better anyway. Rec Room!
C

A truly inspirational man.
A

What if the answer to those questions are both no?
G 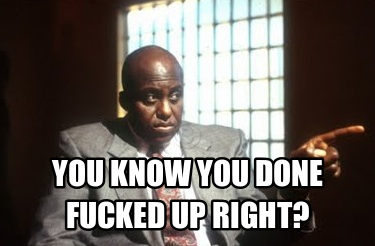 Silicon Valley young entrepreneurial millionaire who doesn't like to wear shoes is a fucking loon, news at 11

This is a bad look, and I feel terrible for the other people that work at Oculus for having to be associated with him.
S

So.... What're the chances Zuckerburg axes the guy?
M

Dude was always shitty but at least more people will know now.
J

I can only wish this blows up in his face in the most glorious and spectacular way.

Fuck him and fuck whatever he is involved with.
P

What a fucking asshole.

Oculus Rift is the VR for Xbox One Scorpio right

Steel said:
So.... What're the chances Zuckerburg axes the guy?
Click to expand...

What does he do? He's just the founder and Occulus was sold.
A

Squire said:
You should put this in the OP too, Jon:

Wha... How does he know that's Palmer? Insane if true
S

And yes, the Vive is better anyway. Rec Room!
Click to expand...

Won't be supporting Rift in the future thats for sure.
S

2016, the media is finally scraping the bottom of the barrel for the dankest of memes in a presidential election. What have we become?
G

Aceshighhhh said:
Wha... How does he know that's Palmer? Insane if true
Click to expand...

It's confirmed in the news article in the OP.
S

entremet said:
What does he do? He's just the founder and Occulus was sold.
Click to expand...

I thought he still worked at Oculus.
F

What on earth? While I will always find these sorts of organizations repulsive, this particular move just seems so immature.
O

Squire said:
You should put this in the OP too, Jon:

Am I missing something? This wasn't made with Palmer's 'normal' reddit account, doesn't mention Palmer Luckey or Oculus? Not saying I don't believe other's saying this was posted by him but I'm missing the breadcrumb trail.
C

That sure is something.
G

Steel said:
So.... What're the chances Zuckerburg axes the guy?
Click to expand...

According to the article, Luckey is not currently employed by Facebook. I didn't hear about him leaving...so perhaps this is news as well?
P

Everyone needs to know this.

Because this is disgusting.
T

"Hillary Clinton is a ... freedom-stripper. Not the good kind you see dancing in bikinis on Independence Day"

WOW.
You must log in or register to reply here.