Slow year for me as I'm working more + my gig economy hustle.

I cant get passed the mouse puzzle, wtf

Fuck you Sony, I'll be buying an Xbox.

TintoConCasera said:
Hey I like your taste in games, almost forgot how good of a game Crypt of the Necrodancer can be.
Click to expand...

Thanks! Yeah, I got totally hooked on Necrodancer last year. It nails that “just one more run” feeling a good roguelike gives.

I've had a great year with my PS5!

adamsapple said:
Boo .. not working for me.
Click to expand...

Umbasaborne said:
I cant get passed the mouse puzzle, wtf
Click to expand...

That motherfucker was designed by fucking From I swear.

Well that's clearly temperamental as it doesn't let me sign in.

800 hours, was expecting more tbh. Surprised to see my most played game was Dark souls 3 with 67 hours. 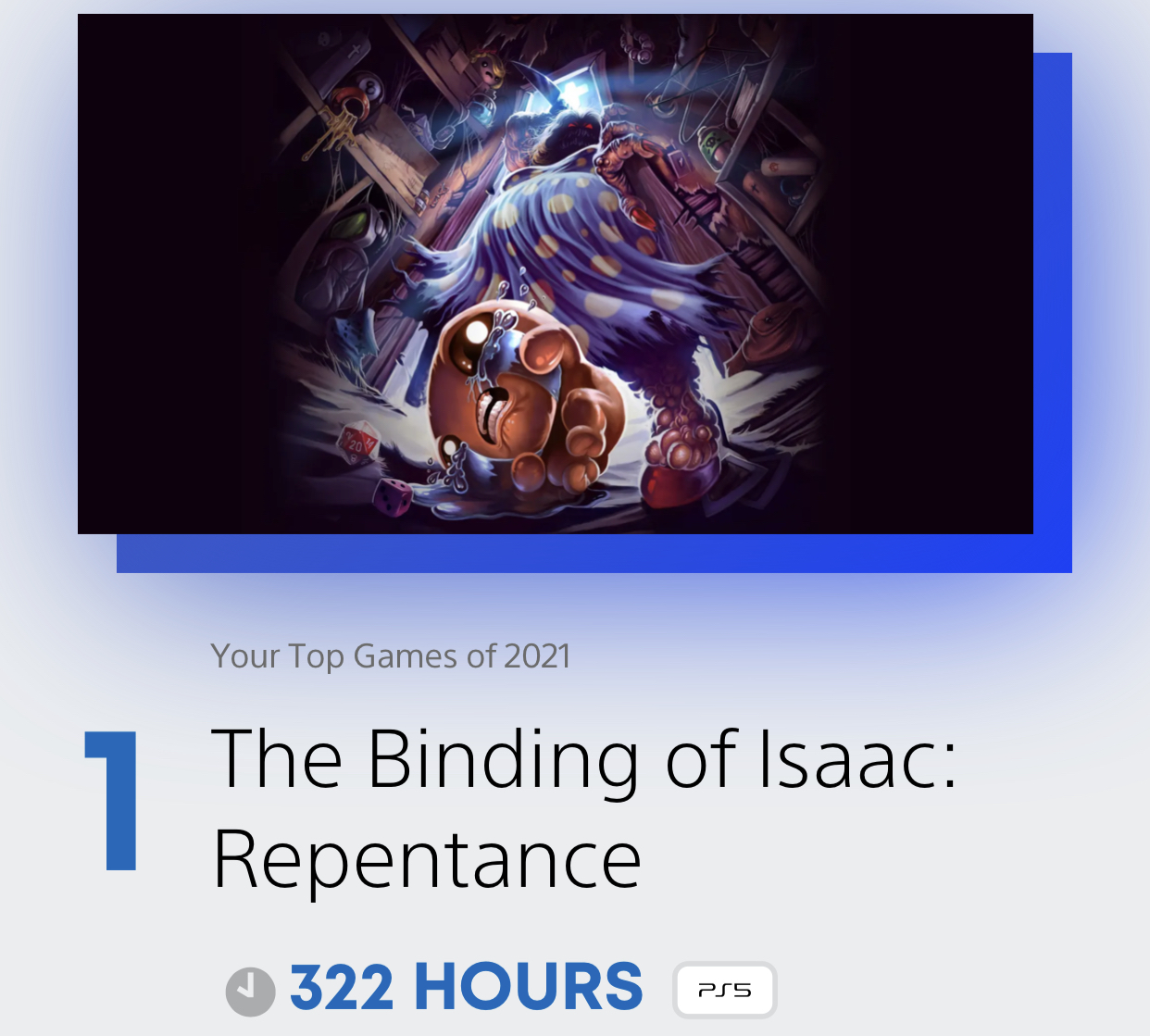 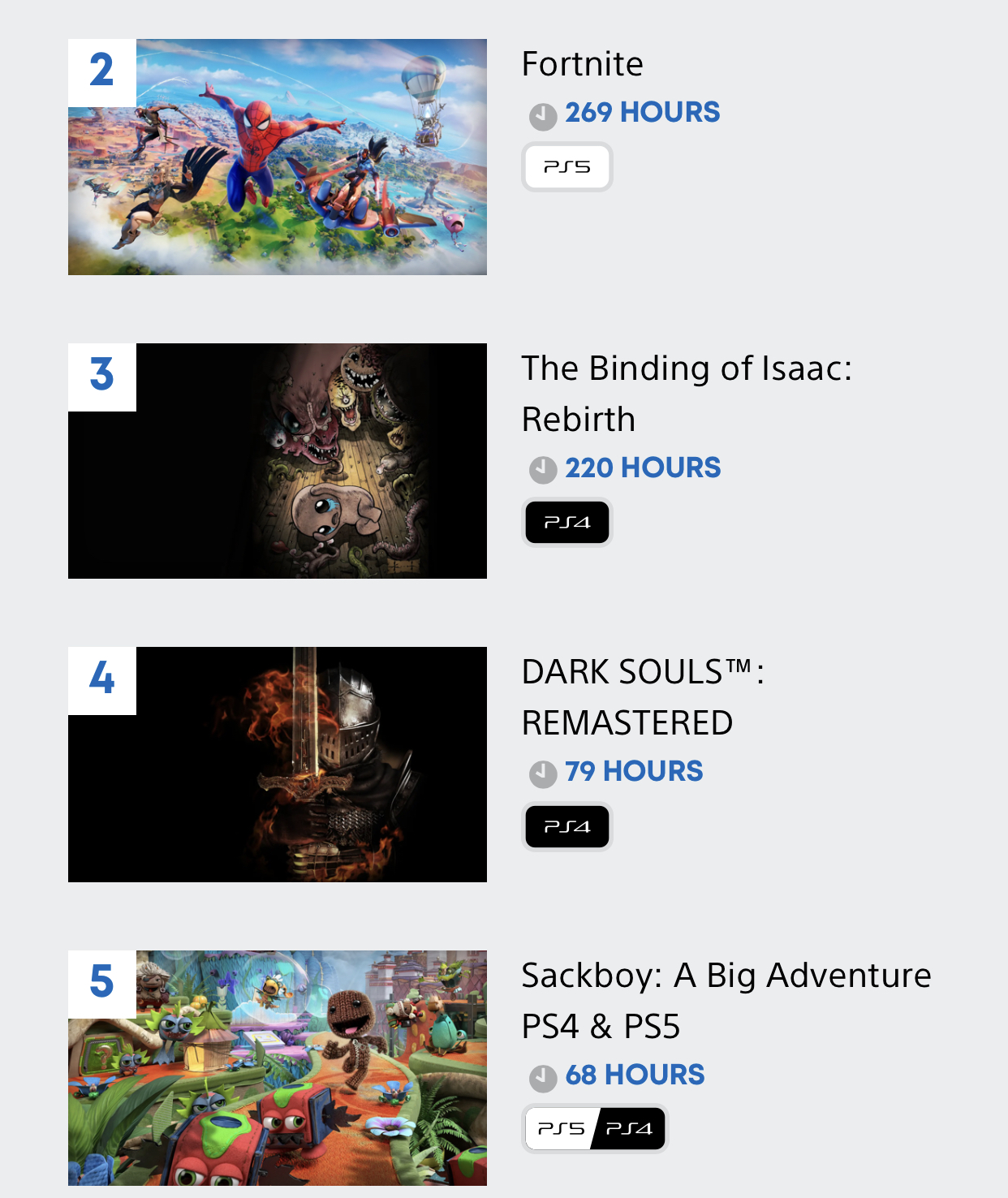 Disappointed. I was expecting 100+ hours in the Abandoned app.
J

Aenima said:
Im also only getting 4 games. And im sure FF7 Remake is one of my top 5 games played. But its a PS+ game, so my guess is these stats are not tracking PS+ games?
Click to expand...

It does count them, I played the Remake from Plus and it logged 41 hours from my account.

157 hours, 0 of them playing online. 61 of them on PS5.
9 different games.
56 of those hours were during December playing Ghost of Tsushima on the PS5 so it could have been much lower.


Not surprised, I almost didn't get any PS4 games this year because didn't see a point in investing more on a platform with PS5 in the market. I didn't have a GPU for 6 months during 2021 but most of my gaming time went to Magic Arena last year.
P

Looks like 50 hours for me which was more than I expected.

Half in in PS5 games and half in PS4 games and of those just Spider-Man and Horizon when I was replaying the later thinking it was due last year. PS5 has been collecting dust otherwise but it sounds like I'll have some time to spend on it with Horizon 2 and Gran Turismo. Hopefully God of War 2 this year too but I'll have to wait to see. Only used for exclusives so it gets to sleep a lot like my PS4 did. 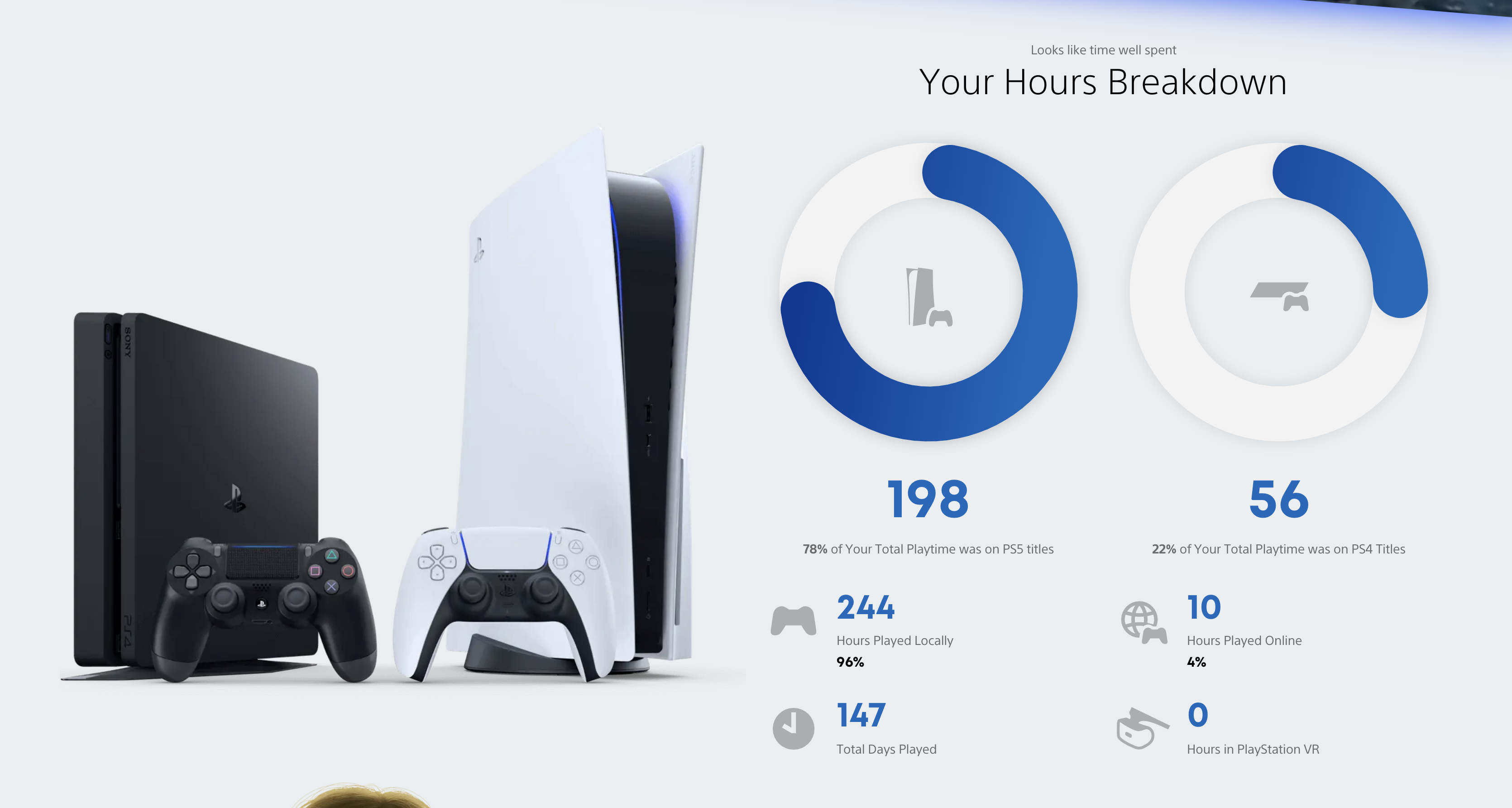 This is bugged. I was playing Spider-Man Remastered, NOT the PS4 game.

God damn, I can't check it. Anyway, I'm pretty sure it's not many hours and it's only exclusives as I only got my PS4 Pro in August.

My numbers are a bit inflated. I clearly leave my console on pause a lot of time. I played Ghost for maybe 60 hours, Hollow Knight for 50 hours and Inmortal Phoenix Rising for 40-50 hours.

jasondefaoite said:
Been a busy 2021. Or maybe not.

Yep that’s all I get despite all the settings being correct.

Bill O'Rights and the rest of you lurking mods, where are your stats.

Stop counting your cash and get linking your most played games, you're part of this community you know. 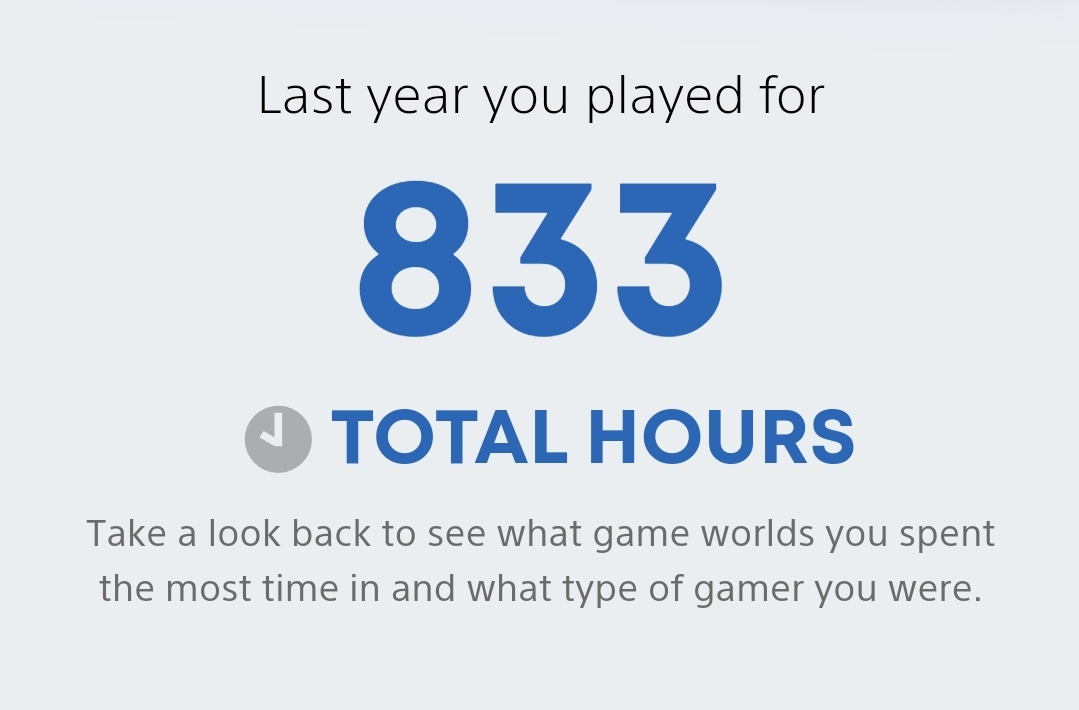 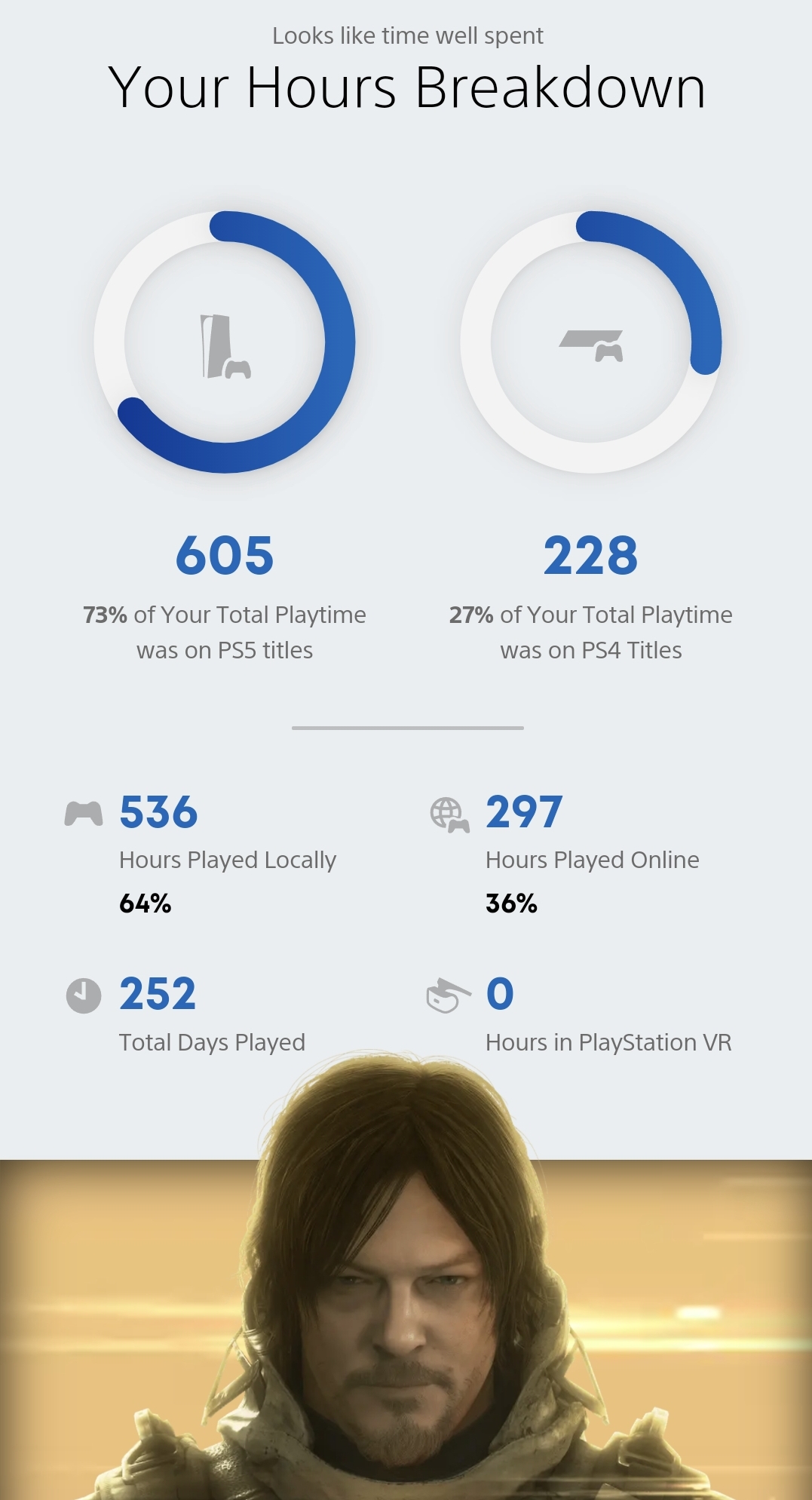 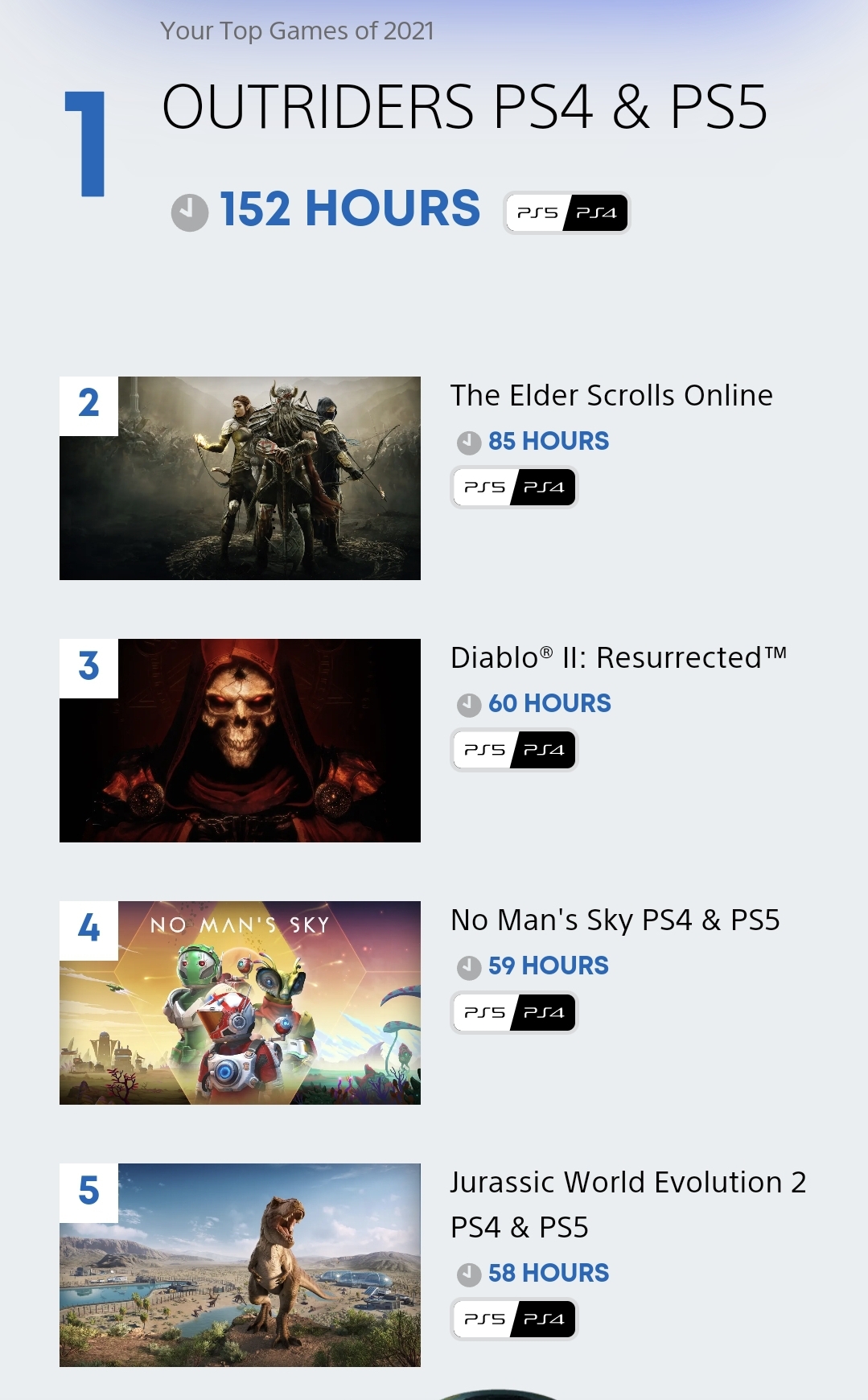 Bill O'Rights and the rest of you lurking mods, where are your stats.

Stop counting your cash and get linking your most played games, you're part of this community you know.
Click to expand...

I can't run mine from a web browser. I have to go old school 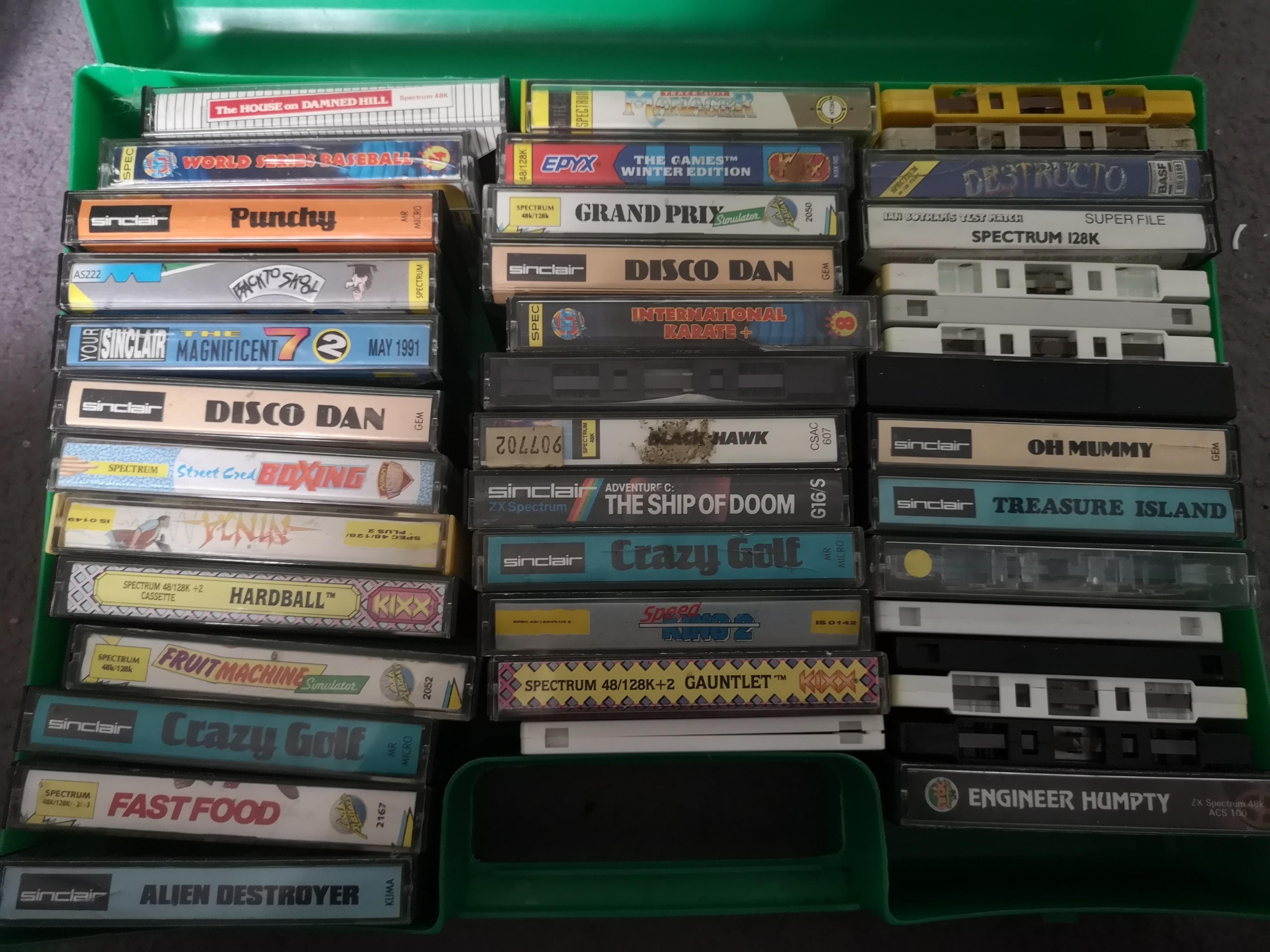 Bill O'Rights said:
I can't run mine from a web browser. I have to go old school

for some reason engineer Humpty sounds so dirty to me.

I guess 2022 will be around the same with GoW and HFW being the only first party games I care about so far.

ReBurn said:
I'll never see mine because Sony wants me to pick the mouse that can't get to the cheese 10 times instead of just doing the MFA challenge.
Click to expand...

I did that 20 times and STILL couldnt get access to the stats cause of 2FA which I have not enabled on my PSN. Screw this shit why make it so tough lol

Love how it says that cyberpunk 2077 was my favorite game based on playtime, when I actually spent most of the time rebooting it after the crashes.

But heh, I had fun somehow...xD 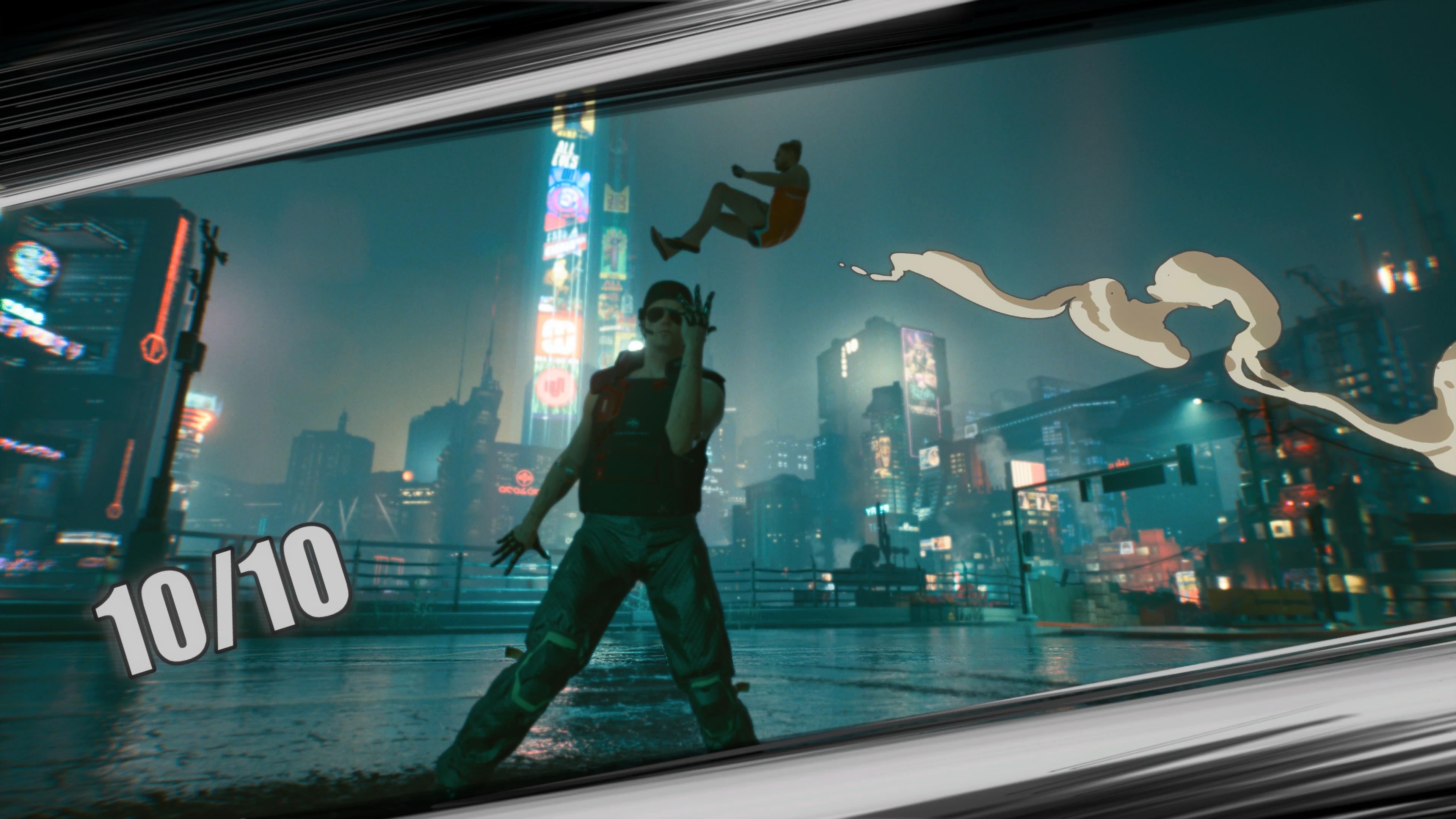 I only gamed up until July last year and then went on a break that I'm still on.
It was the year I finally played Skyrim though.....I put 222 hours into it,and I can say after all that....it was ok I suppose,lol.
Last edited: Jan 21, 2022

Zephir said:
Love how it says that cyberpunk 2077 was my favorite game based on playtime, when I actually spent most of the time rebooting it after the crashes.
Click to expand...

Lol you and me both. I couldn't even platinum the game because the last buyable car was bugged.

It is what it is.

The game has been out less than 4 months.

That's around 5 and half hours a day, minimum.

The game has been out less than 4 months.

That's around 5 and half hours a day, minimum.
Click to expand...

You should of seen what my friends and i did on a weekend lol.

Crazy i tell you, crazy.

If you’re like me who let’s the game in paused state even for hours quite regularly then this doesn’t say much as it counts that time too, I guess.

Not me creating the OP and then leaving before posting my own stats, lmao.

No, i'm not a flop with PS5 games. I just used my PS4 a lot for older PS4 games i never played (Yakuza 0) that i could play at 60fps (Days Gone) or that bacwards compatibility helped a lot in performance and i had never played them (Until Dawn).

Days Gone is awkward considering i have been making fun of all the drama lately...but it makes sense that it's here. I platinumed the game, lmao. TLOU2 was just me replaying it at 60fps, Ghost of Tsushima was me playing the DLC and getting lost in the world map again.

I also did something this year. Platinumed...A LOT of shit:

Most on Death Stranding: DC

I played 42 games in total.

Bill O'Rights said:
I can't run mine from a web browser. I have to go old school

Kdad said:
As a PS3 owner, that saw SONY through the dark days, i'm sadly not invited to this party.
Click to expand...

You and me both, brother.