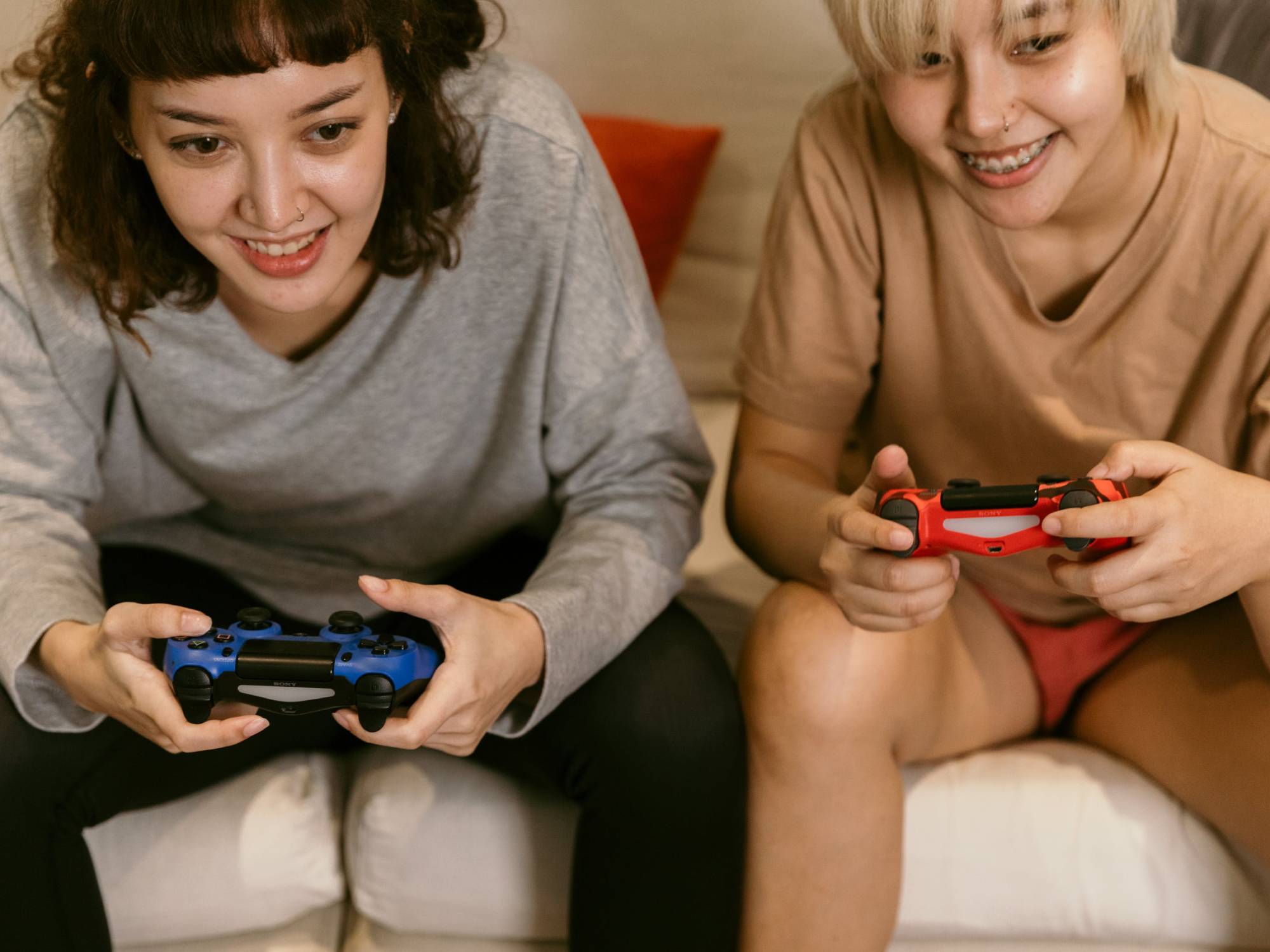 If you get motion video game sickness, there are things you can do for your symptoms. Learn why it happens and how to stop it, here!

"Some people just cannot play first-person video games, no matter how much they like them. It’s not a question of talent, either—the games make them physically ill. We’re talking motion sickness and the troubles that come with it: dizziness, nausea, sweating, headaches, and even vomiting.

If you suffer from gaming sickness, there’s unfortunately no scientific evidence you’ll ever free yourself from its grasp. But just like with regular motion sickness, there are things you can do to delay your symptoms, decrease their intensity, and even train your brain to stop triggering them.

And as much as you may want to play through the pain—don’t. It won’t work.


What causes gaming sickness?
The short answer is: we don’t really know. The most popular theory, though, names sensory conflict as the culprit—this is when your brain receives information that doesn’t match its expectations for how the world should work.

For example, when you walk down the street, your eyes see buildings and the movement of the people around you. Meanwhile, your inner ear—the organ in charge of your balance and sense of motion—corroborates this information by telling your brain that yes, you’re moving. There’s no conflict. Everything is peachy.

But when some people play video games—especially titles from first-person series such as Call of Duty, Dishonored, and Borderlands—there may be a disconnect between what their eyes see and what their inner ear detects. On one hand, they see realistic movement on the screen designed to make them feel immersed in the game. On the other, their inner ear tells their brain there’s no movement at all—that they’re just sitting on their couch. Those mixed messages make the brain freak out, and that’s when gaming sickness occurs.


Keep it short
The most reliable counter to gaming sickness is to start playing challenging games slowly, over a series of brief sessions, says Séamas Weech, a postdoctoral research fellow at McGill University, whose work focuses on understanding cybersickness in virtual reality. This allows the brain and body to build up a tolerance—a process those in Weech’s field call “getting your legs.”

“Training users to become immune to motion sickness is an intensely active area of research. Although we have no Holy Grail, we have learned a lot,” Weech says. “The best safeguard is to avoid challenging the sensory systems in the first place.”

That’s why struggling through the discomfort won’t help you—it overloads your senses. Instead, take a break as soon as you start feeling sick, wait until your symptoms have subsided, and only then try again.

Your previous experience with video games, and the particular title you’re playing are key to whether this method will work for you, and how well, says Weech. These variables are why there’s no saying how fast you’ll be able to increase your play time or how long it will take you to get fully used to the game you’re playing—if ever.


Avoid the big screens—and the small ones, too
We like huge displays because they allow us to see pictures in more detail, but also because they make it easier for us to immerse ourselves into what we’re watching, be it a movie or a video game. But this is exactly why you should not use one if you suffer from gaming sickness.

Smaller screens are better: they won’t take up your entire field of vision, constantly reminding your brain that you’re actually in a room and the movement you see is only an image on a screen. “The room provides a stable visual reference that keeps the player grounded in the real world, which will reduce sensory conflicts,” says Weech.

If you already have a big flat-screen TV that is now making you nauseous, you don’t need to throw it away—sitting farther from it will have the same effect.

But don’t go too small and confine your gaming to your smartphone. Tiny screens require you to strain your eyes to make out fine details, so you’ll most likely end up with a headache, another common and annoying symptom of gaming sickness.


Keep it lit
You can take this as general life advice, but here we’re specifically talking about the room you’re playing in. Ditch those neon strips you saw on TikTok, or those fairy lights that have been hanging around your window for years, and turn on a proper lamp to light up your space.

This has a double effect. First, playing games in a well-lit room will prevent you from exerting your eyes, which will help you avoid a headache. Second, illuminating your surroundings will help your eyes understand that you’re in a room, not fighting zombies on the Titanic.


Control the elements
Because gaming sickness is a form of motion sickness, most things that alleviate the symptoms of one, work for the other—including getting some fresh air on your face and drinking cool water.

You can enjoy the breeze while you walk or sit outside on one of your breaks, or you can point a fan at yourself while you play. Weech says the latter can actually help generate the sense of physical motion that is usually absent when gaming, which will lead to less sensory conflict. Meanwhile, cool water will help settle your stomach when you start feeling sweaty or nauseous.


Get some backup
In the gaming community, some see gaming sickness as a weakness, but there’s absolutely no shame in getting some help if it means reducing discomfort and playing for a little while longer.

Some studies show that ginger can have a therapeutic effect on nausea, though whether it brings significant or mild relief varies from person to person. You can try ginger tea, ginger beer, or even ginger candy. If you prefer to try ingesting it as a supplement, be sure to consult your doctor before you do so.

Another method that was designed to fight regular motion sickness but is also used by gamers is wearing acupressure wristbands. These bracelets look a lot like something John McEnroe might have worn on a tennis court in the ’70s, but they have a plastic insert that applies pressure to a point on the underside of your forearm, just below the wrist. Known as the P6, this acupressure point is three fingers (about 1 to 2 inches) below the base of your hand, and pressing it constantly can help relieve nausea and dizziness. If you don’t have these bands, you can achieve the same effect with your thumb.


If all else fails, change the game
Some games are worse than others when it comes to gaming sickness. First-person shooting games are the No. 1 culprit, while anything with super-realistic graphics can make some people’s world spin round and round in a second. Sorry, but if nothing’s working, you might have to stop playing that title entirely.

Before you give up your favorite game, though, see if it’s possible to change the sensitivity settings or the player’s point of view. Going from only seeing your character’s hands to seeing their entire back can help a lot, while reducing the speed of the camera movements and the bobbing of the head and guns can also make a huge difference. Don’t forget to check your screen’s settings, too—high refresh-rate displays can be nauseogenic, so bump those frames-per-second down a bit or change your display to something slower.

If all these changes don’t help, you may want to try another kind of game—third-person narrative, puzzle games, a vintage 2D title, or pre-Nintendo 64 Mario Bros., to name a few. It might be disappointing, but you may have to build up your tolerance so you can finally play titles like Halo or Apex Legends. Getting your body used to less-complex games first is a great segue into highly realistic graphics and fast camera movements.

Remember: torturing yourself by enduring your symptoms won’t help them go away any faster. Take it slow and enjoy your playtime. Games should be fun, after all."
Last edited: Feb 2, 2021
Reactions: ButchCat

I get nasty motion sickness on a lot of FPS games. A few things that help me out:

So sad that I never felt that in most games, but talos principle of all games gave it to me. I tried to use their settings for that, but that didn't worked either.
Reactions: Maiden Voyage and ButchCat

I still get motion sickness from time to time but going back it was worse. I noticed that higher framerates e.g 60 FPS and above as well as floaty cameras can trigger me. To this day I can't play the buggy section in HL2 it usually makes me a mess.

Shaky cam (or motion sway) is the main/biggest culprit for me and it's not limited to first person. In fact the only game that made me physically ill was the first Evil Within, a 3rd person game. Barely made it up the first set of steps before feeling sick. The 2nd Bourne movie was the first movie I walked out off because of the excessive shaky cam.

Do you guys get travel sickness?
Only time i've ever gone dizzy while gaming was the first time i used a Oculus Rift and it only happened because i put the headset on before i was sat down.

Borderlands 2 took me a week to get used to on ps4. On ps3 I never managed, one 30 min session gave me 2 days of headache and nausea.

V4skunk said:
Do you guys get travel sickness?
Only time i've ever gone dizzy while gaming was the first time i used a Oculus Rift and it only happened because i put the headset on before i was sat down.
Click to expand...

Only some VR games give me motion sickness. Worst one so far is Firewall Zero Hour.
K

Maiden Voyage said:
I get nasty motion sickness on a lot of FPS games. A few things that help me out:

Good info. This all started for me on a 77 inch tv, and im 13ft away. FOV over 100 has definitely helped, but it is hard to test due to the delayed physiological response.

Rocket League and Doom both made me pretty sick.
Reactions: Maiden Voyage

I dont have huge problems. But games with low field of view can get me a bit nauseated after an hour or so. Killzone 2 was pretty bad.