Very unexpected, but I suppose with all the retro stuff coming back (including repros), it was only a matter of time.


If you're familiar with collecting rare Japanese retro games, then the name Advanced Busterhawk Gley Lancer will no doubt ring a bell. Released exclusively in Japan in 1992, this horizontally-scrolling shooter from Masaya barely caused a ripple in the west at the time of release – partly because it was never published in the US or in Europe – but it quickly gained an enviable reputation a few years later, with its scarcity and overall quality quickly causing its stock to rise as word-of-mouth spread via the internet.​
​
These days, Gley Lancer regularly changes hands for triple-digit sums, and while there are more expensive Mega Drive games, it's one of the crown jewels of any Sega fan's collection. Thankfully, Japanese publisher Columbus Circle (under licence from Extreme, which owns Masaya's IP) is about to give players a shot at owning this title without having to sell a kidney. The company will re-release Gley Lancer in June, with a price of 5,980 yen (£41 / $53).​

Already available for preorder on Amazon.jp and "coming soon" on Play-Asia: 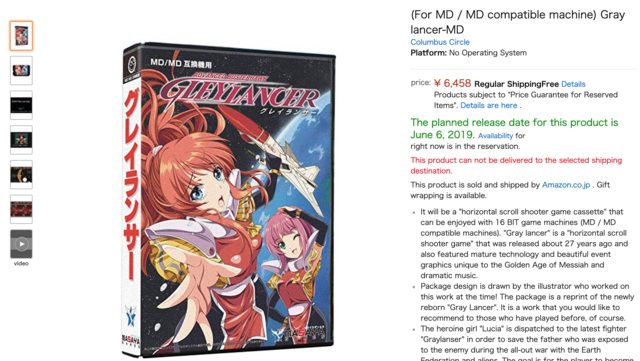 I wonder if they will ever release Musha

Love this. Will definitely order for my Mega SG, what a magical thing to get a new, physical Megadrive game. I wish they would kindly ask Sega if they could use the trademark in the box, I’m sure they wouldn’t mind.

Looks cool, if it was on switch I'd get it.

My favorite MegaDrive shmup. This is how awesome this game is.

There is actually a pretty fantastic english patch for this game. But it is very cool of them to release it again. I do prefer the original cover, much better than "anime girls in space".

Imagine booting up stage 1 for the first time and hearing this:

How is this any better than a reproduction exactly? Either you own the original or just use a Mega everdrive.

Bar81 said:
How is this any better than a reproduction exactly? Either you own the original or just use a Mega everdrive.
Click to expand...

Fair question. Some people just like physical stuff that looks cool on the shelf. Sometimes repros and Everdrives lead to... issues on original hardware, so purists might prefer only buying official repros like these or only from trusted hobbyist makers of repros (often found on sites like etsy).

This is an interesting announcement. Vixen 357 was a nice surprise to get a physical release, now this too. =O

The more the better, of course.

Immediately sold on the name alone

Tasty linescrolling effects for the asteroid belt in the footage too. That's a cool-ass design for the first stage you see.

Gleyy Qweeen!
You must log in or register to reply here.