The rumours come from a source that has been correct on numerous occasions, including the recent Skylanders collaboration. That being said, it's still important to take this with a grain of salt.

A note from RawmeatCowboy about the source.

RawmeatCowboy said:
I'd just like to point out that the original source has a good track record with rumors. The same source had leaks on the third wave of amiibo, including the third party characters announced. On top of that, the same source gave early word on Nintendo characters being added to Skylanders. Take that for what it's worth. All that said, even I'm still very skeptical of these rumors.
Click to expand...

Nintendo & Disney have negotiated a deal for films, video games and interactive toys/merchandise
- amiibo are not included in Disney Infinity 3.0 because both companies are yet to set an agreement
- Disney wanted to have Mario figurine in Disney Infinity, but Nintendo hasn't made a deal yet
- Mario could star in Disney films, such as Wreck-It Ralph 2
- Disney wants a game where Mario and Mickey meet up
- Nintendo is open to the idea, but want to set their own pace for it
Click to expand...

Here's a better translation of the Amazon portion, provided by Valen.

Valen said:
Spanish was my first language, so here's my translation of the Amazon tidbits:

-When Iwata announced their new mobile initiative, Amazon approached them and told them they wanted Nintendo's games on Amazon's app store too
-Iwata liked the idea, and asked Amazon if it would be possible to get Amazon's appstore games running on Nintendo's own hardware
-Nintendo's games would be on Amazon's appstore day 1, or at least close to the same day as on other appstores
-Nintendo has some sort of Android emulation in mind. Their hardware won't be running Android games natively.

I'm just translating, so don't come after me if this all turns out to be BS ;P
Click to expand...

Here's another translation of the Amazon portion, by Nazgul_Hunter.

Here's my translation on the Amazon part.

I found this story on GoNintendo, but the original source is here and here.

Here's a full translation of today's article, provided by SalvaPot.

Rumor] Nintendo and Disney are negotiation a big deal, including a videogame with Mario and Mickey.

The mobile Nintendo games are getting an Amazon Store App release according to our source.

In November of 2014, before the first release of Amibo, we at Revogamers told you about the negotiations that Nintendo had going with third parties to externalize its figures, inside and outside their software and hardware. A little bit after this Pac-Man, Sonic and Mega Man got announced. And this E3 the Skylandres Superchargers compatibility was announced.

¿So what was wrong about our information? The other half of the deal, its use on Disney Infinity. Our source, ricardo2001, explains to us what happened and its happening alongside new information of what is happening at Nintendo.

The search for a big deal with Disney; Movies, videogames and more
The negotiations between Nintendo and Disney are still coming along with intensity (as in heated discussions). The first issue was that Disney wanted Mario to appear on its game, and Nintendo has not accepted yet (Skylanders got Bowser and Donkey Kong), and that is why there is no amiibo in Disney Infinity 3.0. Nevertheless, the negotiations continue.

According to our source, Disney has a throbbing desire for Mario since years ago and has offered Nintendo the possibility to use their big icon in multimedia products (Movies, interactive products...) but its owner resisted. Until 2014 when Satoru Iwata announced a change in policy and opened the licenses to other companies.

This is why the negotiation is more intense and higher in scope. The deal between Disney and Nintendo could be huge and would include all kinds of collaborations, like movies, videogames, merchandise, etc. And as an example they give us the possibility of a future Wreck-it Ralph 2 with Mario or that hey could do an spin-off with the plumber in a bigger, protagonist-like role.

Meanwhile, the videogames and as a more astonishing part of the deal, there would be a title leaded by both Super Mario and Mickey Mouse. The crown jewel that is the reason why Disney is dealing pressure. But Nintendo could be pondering delaying this deal to make it an announcement to the public when the time is right for them, because they know this could have a huge media news, even in the General Press.

This is the current stage in the negotiation. The deal is not closed and it depends on legal themes and how they would divide the benefits before or after is signed. Or perhaps it could never be produced.

Nintendo, Amazon, and the mobile (market)
Another big company that Nintendo is working with is Amazon, the giant of the Online Commerce. When Iwata announced his incorporation into the mobile market, at Amazon they really wanted to tell them that they wanted their game in their App Store. nintendo liked the idea and it seems that, along with the Google and Apple stores, the (Nintendo) mobile games would also be in the Amazon Store, if not at release date, not a lot later.

The curious thing about this, according to our informant, is that Nintendo had an interest for the Amazon exclusive games and they even asked what they had to do so those games (specially the ones that had traditional controls) could be run on a Nintendo console. After talking with a few technicians, the idea that Amazon had was that Nintendo has some type of Android emulation in mind. Not a native android system, but an emulated one. Its something they couldn´t confirm, but its an interpretation of this conversations.

By the way, another thing that affects the american giant is that he is been damaged by a strong restructure of the online services that Nintendo is doing. Its retiring services from some areas while increasing many others, at the same time they are taking Amazon data and delivering it to DeNA, its new partner.

Once again, none of this information is confirmed by Nintendo or any other official source, so its going to stay in rumors.
Click to expand...

Two Nintendo fan sites, I doubt Nintendo will even bother refuting it.
1

Fucked in America if so.

Nintendo getting in bed with everyone.

Is Nintendo the neighborhood slut of games?
Z

Gonna say no though.


PerezDeCorcho said:
Is Nintendo the neighborhood slut of games?
Click to expand...

Too wild rumours. Unless its from a non-Nintendo fanboy site, i'll take it a truck full of salt.
E

Kinda suspect that Nintendo would get with Disney for everything but amusements and going with one of their direct competitors from that, but TWDC is a gigantic entity and I'm sure marketing would be willing to overlook that if the opportunity arose.
R

I'd just like to point out that the original source has a good track record with rumors. The same source had leaks on the third wave of amiibo, including the third party characters announced. On top of that, the same source gave early word on Nintendo characters being added to Skylanders. Take that for what it's worth. All that said, even I'm still very skeptical of these rumors.
B

PerezDeCorcho said:
Nintendo getting in bed with everyone.

Is Nintendo the neighborhood slut of games?
Click to expand...

I don't see them doing much with Microsoft.
M

Yeah, why not. Wreck-it-Ralph showed it could all happen.
R 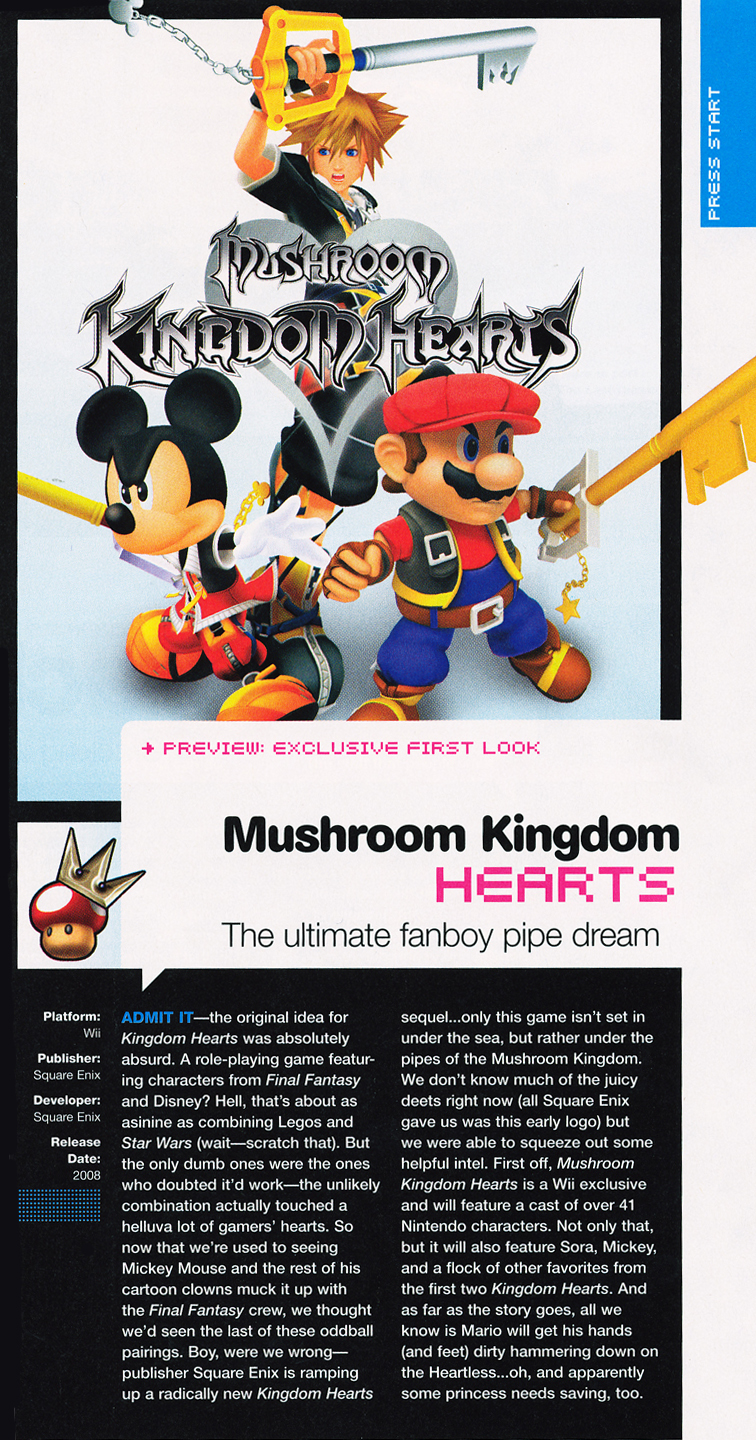 Baron von Loathsome said:
I don't see them doing much with Microsoft.
Click to expand...

Disney and Nintendo films, but Universal has the theme park rights. History is cyclical.
T

What is the availability like on the disney figures? I always see TONS of them in stock everywhere. Maybe they can work together.
H

Nintendo & Disney Infinity seems likely, honestly.
But I don't know how knowing about Nintendo's figure deals would lead to knowing about plans for movies and mobile.
J

Mario in Wreck-It Ralph 2 is already happening, by the way.
C

This all seems possible.
L

Zelda TV show may happen with Amazon TV Prime and a Mario Animated movie with the same team of Big Hero 5.
T

I hope they both turn out to be true though. Seeing Mario in a Disney game, or Disney in a Mario game, would be like a childhood dream come true for me.
P

Disney is too busy working on that Banjo movie.
T

So Mickey for Smash?
D

Haha, you beat me to it!

Persona7 said:
What is the availability like on the disney figures? I always see TONS of them in stock everywhere. Maybe they can work together.
Click to expand...

They're very easy to obtain, by design.

There is ONE single exclusive, at a D23 Expo before the game originally launched. At E3, they're regular versions. Availability is high everywhere.

TRU has some alternate version of characters, but nothing drastic.

They didn't want to do anything to make collector's get aggressive, keeping the kids from getting any.

Gonna turn out to be BS.

Feel free to bookmark this and breed some crows but it'll be in vain.
O

Move over Sonic, it's time for Mario & Mickey at the Rio Olympic Games!!
J

I don't see them doing Amazon only. Unless they are skipping the android market place and just going Amazon/iOS App Store
Also, don't think the rumor is legit. Sounds a bit funky, though I've been wanting Nintendo and Disney to work together for a long time
O

oreomunsta said:
Move over Sonic, it's time for Mario & Mickey at the Rio Olympic Games!!
Click to expand...

I hope this is true. A western touch is what Nintendo needs right now to decentralize their japanese heavy centric management. Hope this means autonomy to their american and european branch as well.
D

that was fake
T

Nintendo has been talking up cross-media partnerships for ages now. There's a Universal theme park on the way.

And is the implication in the second one supposed to be that Nintendo mobile content would be exclusive on Amazon Appstore? I doubt that?
G

Persona7 said:
What is the availability like on the disney figures? I always see TONS of them in stock everywhere. Maybe they can work together.
Click to expand...

Pretty good, actually. They always seem to have stock of all of their characters available, even the limited edition figures. About a week ago, I found a few crystal 1.0 figures in Toys R Us. The crystal figures are their limited editions.
M

Is it really that hard to believe, especially Disney's Mario movie?
We know Nintendo didn't really object Mario being in the first Wreck-it-Ralph movie.
P

D_prOdigy said:
Doesn't seem like groundbreaking news or anything?

Nintendo has been talking up cross-media partnerships for ages now. There's a Universal theme park on the way.

And is the implication in the second one supposed to be that Nintendo mobile content would be exclusive on Amazon Appstore? I doubt that?
Click to expand...

Kingdom Hearts 3 NX port with exclusive Mushroom Kingdom world? I would love to see the reactions to that.
You must log in or register to reply here.

Wohc replied
May 19, 2022
What do you think Nintendo's long term plan will be?