What's up with the monitor market? Tech seems to stagnate? Where's the good monitors? Any recommendations (EU models only)?

I've been watching the monitor market for many years now when I wanted to upgrade my old 150 EUR 60Hz TN panel from 2010 to something significantly better. In 2019, when I ended up buying and trying six different monitors with different sizes and panel types, I'd hope tech evolved so much I would get an amazing monitor for just a bit more than for those 150 EUR I paid in 2010. Twelve fucking years ago. Look at how smartphones and tech generally has evolved since that, yet PC monitors? A fucking disgrace. So from those six monitors I've tried, none felt even "very good", let alone amazing. I kept a 144Hz G-Sync compatible TN Panel for just slightly above 300 EUR. It was an upgrade for sure, not worrying about v-sync anymore, but for that price tag I still expected more and it's just "okay", but for the lack of said significant update options, I said fuck it and kept it.

Now, three years later, and after playing a year on consoles on my LG OLED, I wanted to check again what happened at the market and after spending days on rtings, reading reviews elsewhere and checking videos back and forth I conclude that it is as disappointing as it was roughly four years ago.

VA looks good with its contrast and colours but even at 27'' you already see a shift in brightness and/or colours at the corners because of the narrow viewing angles. Also, every model I've tried, even high refresh rate ones, had smearing issues when movement happens on the display. The only VA display that hasn't got this issue was some weird brand called "AntGamer" and it was a 400 EUR 21:9 monitor I friend of mine ordered, and I've tried it and was quite impressed because I've tried even 800 EUR monitors that didn't look that good. Unfortunately it's not available anymore. Darn.
I haven't tried IPS personally, but seeing pictures and videos of the backlight bleeding, it seems, at least with black levels, it's no better than VA when I look into corners or at the top or bottom and see a shift in brightness due to BLB. Since contrasts are at TN niveau at worst but better in most scenarios, I wouldn't mind go for a IPS, but I don't want any glowing in dark games/movies.
(My) TN panel doesn't have BLB, but worst contrasts (which is somewhat okay for me, personally) but also narrow viewing angles, hence shift in colours and brightness at corners and top and bottom, visible even at 27 inch, which is really annoying when playing games like Resident Evil or, in general, dark games. It has ultra fast response times, though and has no ghosting or smearing on movement.

So in fact, none of these options are inherently better or worse then the next. It's so disappointing that it practically doesn't matter. I don't need the ultimate contrast ratio of an OLED, I "just" want its stable viewing angles and good blacks (doesn't have to be power-off-like blacks) without shifts in brightness. Owning a LG OLED BX9 I'm really blown away and I practically want that as a monitor in 32'' and 1440p for my PC.

Closest thing though is the LG 48CX which seems to blow any available monitor to dust and makes me question the entire monitor market (amazing viewing angles, perfect contrasts and black levels, 120Hz, VRR, no BLB, fast response times, no smearing... now also add HDMI 2.1 so I could use my PS5 if I wanted to and good luck, try finding that in a PC monitor). And all of that for just 840 EUR for 48 inch. Unfortunately it's way too big. I once used an 40 inch Samsung LED TV as a monitor which was cool and the maximum size I'd want on my desktop... having like 20cm more diagonally would be too much.

So if you want 120Hz, VRR, or a good image in general on a PC monitor you're practically fucked... for years now.

Then there's this new Dell Alienware Ultrawide screen Q-OLED monitor, but it costs 1.300 EUR here and has some teething problems that I wouldn't wanna see on a 1.3k device.

Seriously, what the hell is going on? Why keep they pushing absurd Hz numbers, like +300Hz but don't care about picture quality? Why do the market/audience settle for this and is okay with that?

Filben said:
Seriously, what the hell is going on?
Click to expand...

- The production of oled panels for the usual monitor formats is still very expensive and burn in for static images still not 100% solved.
- mini led as the next best thing is also rather expensive to fabricate and not trivial to get working at the response times needed for pc gaming.
- micro led is far off consumer regions still.

So what is going on exactly: the good stuff is still too expensive to be viable for the mass market
Last edited: Jul 12, 2022

Quick question, how deep is your PC desk? If you're gonna start using TVs as monitors you probably need a deeper one. Exactly what I did when every monitor looked like ass compared to my (now quite old) C6, I bought a 55" BX and a 100cm "desk" which is more like a small meeting table.

Obviously space dependent but it's absolutely fine at that distance. Can't imagine even a 48 on a regular PC desk though. Also obviously requires being careful using an OLED for everyday PC use but it's a small tradeoff IMO.
C

Yeah it's a weird space. I game on PC but use a Sony X900F and other Bravia's before that, ranging from 40-55 inch. It's trickier now for some with 55inch being standard and the occasional 49-50 inch.

Even my family member that wanted a modest sized TV for their living room was stuck at the options.
Last edited: Jul 12, 2022

I just use a LG CX for controller games and a regular 32in 1440p monitor for other stuff. Seems like it’s gonna be a while before OLED monitors become common.
F

AV said:
Quick question, how deep is your PC desk?
Click to expand...

69cm... you think that's enough for an 48 inch TV? Can imagine it's still a bit too close and 42 seems to be max that's comfortable.

Yeah, I've seen one on Amazon but it costs 1350 EUR which is kind of absurd.

Filben said:
69cm... you think that's enough for an 48 inch TV? Can imagine it's still a bit too close and 42 seems to be max that's comfortable.

Yeah, I've seen one on Amazon but it costs 1350 EUR which is kind of absurd.
Click to expand...

Personally I'd think 69cm wouldn't be quite enough for a 48 incher, even 42 is a push. If you wanna go that route I would look at a bigger table. Here's an older pic of my 55" on a 100cm, works for me but some might still hate it and it's not exactly easy to try before you buy. 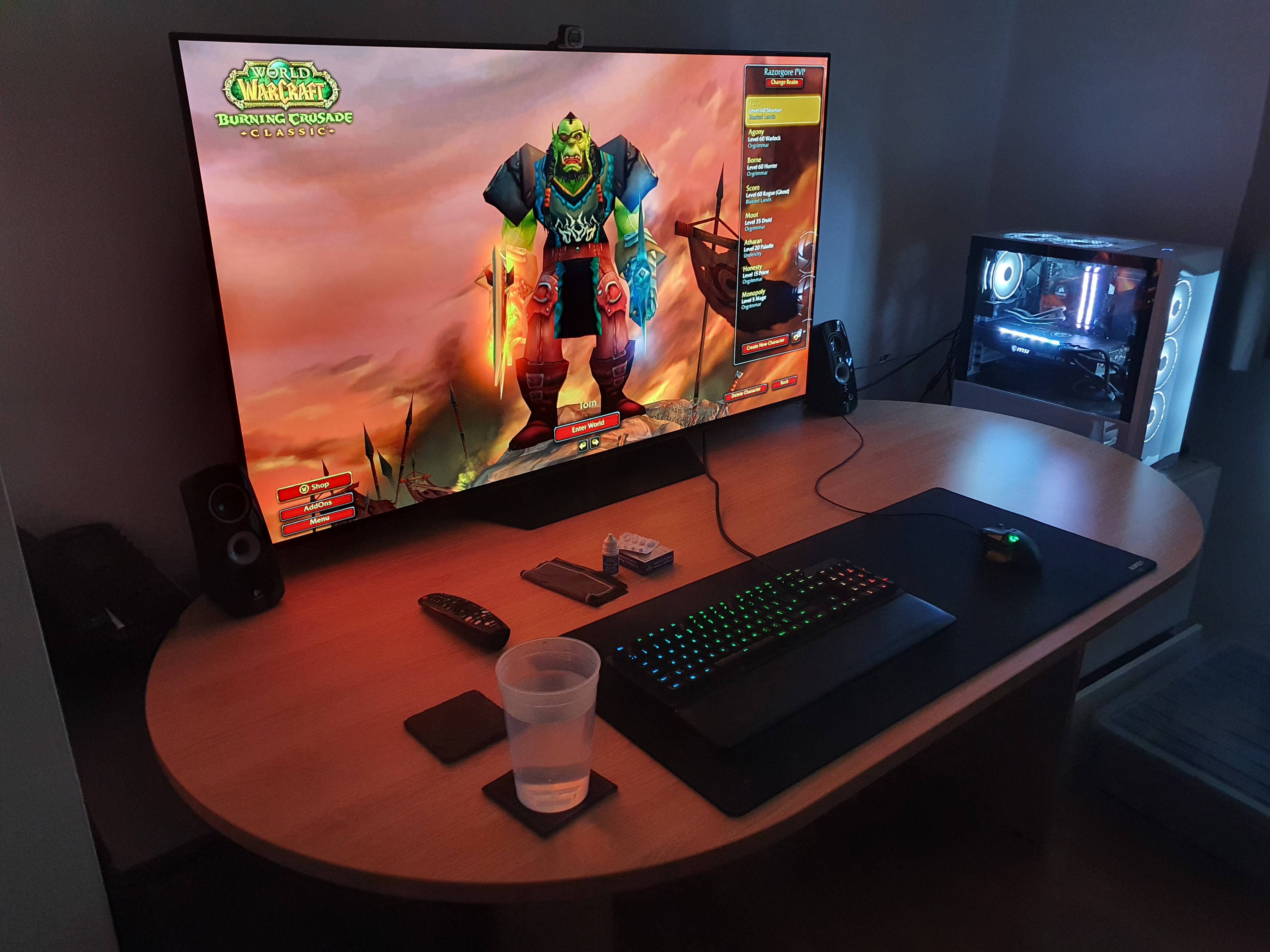 And yeah, after a point, smaller OLEDs are annoyingly going to cost you more than bigger ones. Exactly why I said fuck it and went 55, I wasn't about to pay hundreds more for 7" less screen.
You must log in or register to reply here.