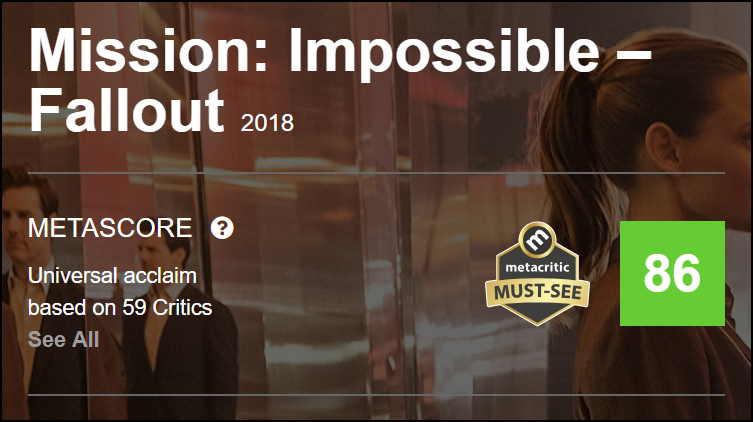 The Meg” devoured the competition at the domestic box office.

Warner Bros.’ big-budget shark thriller opened well above expectations, biting off $44.5 million when it opened in 4,118 North American locations. That was easily enough to nab the No. 1 slot over “Mission: Impossible – Fallout,” which picked up $20 million in its third outing for a domestic tally of $162 million.

“The Meg,” which is a co-production with China, will still have to secure big returns overseas to justify its expensive $130 million production budget. It’s not quite in the black yet, but it’s off to a good start given a $96.8 million international tally, including a strong $50 million in the Middle Kingdom. Imax screens accounted for $13.6 million of “The Meg’s” $141.3 million global total.

Jeff Goldstein, Warner Bros.’ head of domestic distribution, attributes the better-than-expected opening to the studio’s marketing campaign, along with a non-competitive August debut.

“It’s just good popcorn entertainment that didn’t take itself too seriously,” he said. “It’s silly, it’s fun, and it lets audiences have a good time.”

Fellow newcomer “BlacKkKlansman” debuted in fifth place with $10.8 million in 1,500 locations, earning director Spike Lee his best opening in over a decade. Lee’s Cannes Grand Prix-winning crime drama, which debuted on the first anniversary of the deadly Charlottesville rally, has maintained enthusiasm with a promising 97% Rotten Tomatoes rating and an A- CinemaScore.

“Theaters told us repeatedly over the weekend that audiences were applauding, laughing, emotional, and some in tears by the film,” Focus Features’ president of distribution Lisa Bunnell said. “Spike has been able to bring something to the conversation of America that people haven’t been able to have.”

Prior to “BlacKkKlansman,” Lee’s recent biggest opening was his 2006 film, “Inside Man,” which launched with $28 million. His latest outing, “Chi-Raq,” picked up $2.5 million during its limited theatrical run ahead of an Amazon release.

The final weekend opener, “Dog Days,” picked up $2.6 million when it launched in 2,442 locations.

Meanwhile, Disney’s “Christopher Robin” earned $12.7 million in its sophomore frame, landing the fantasy drama based on the characters from Winnie the Pooh in third place. To date, it has generated $50.3 million in North America.

A24’s “Eighth Grade” hit an achievement of its own. Bo Burnham’s coming of age drama picked up another $1.6 million in its fifth frame, taking its domestic tally past $10 million.

At the speciality box office, Magnolia Pictures’ “Skate Kitchen” bowed with $17,000 when it opened in just one location. The best per-screen average, however, went to Oscilloscope’s “Madeline’s Madeline,” which pocketed $20,000 from one venue.

The summer box office remains strong, up a promising 11.2% from last year, according to comScore. Thanks to a surprisingly powerful debut from “The Meg,” the weekend-to-date number is up 23.7% from the same frame last year, when “Annabelle: Creation” launched with $35 million.
Click to expand... 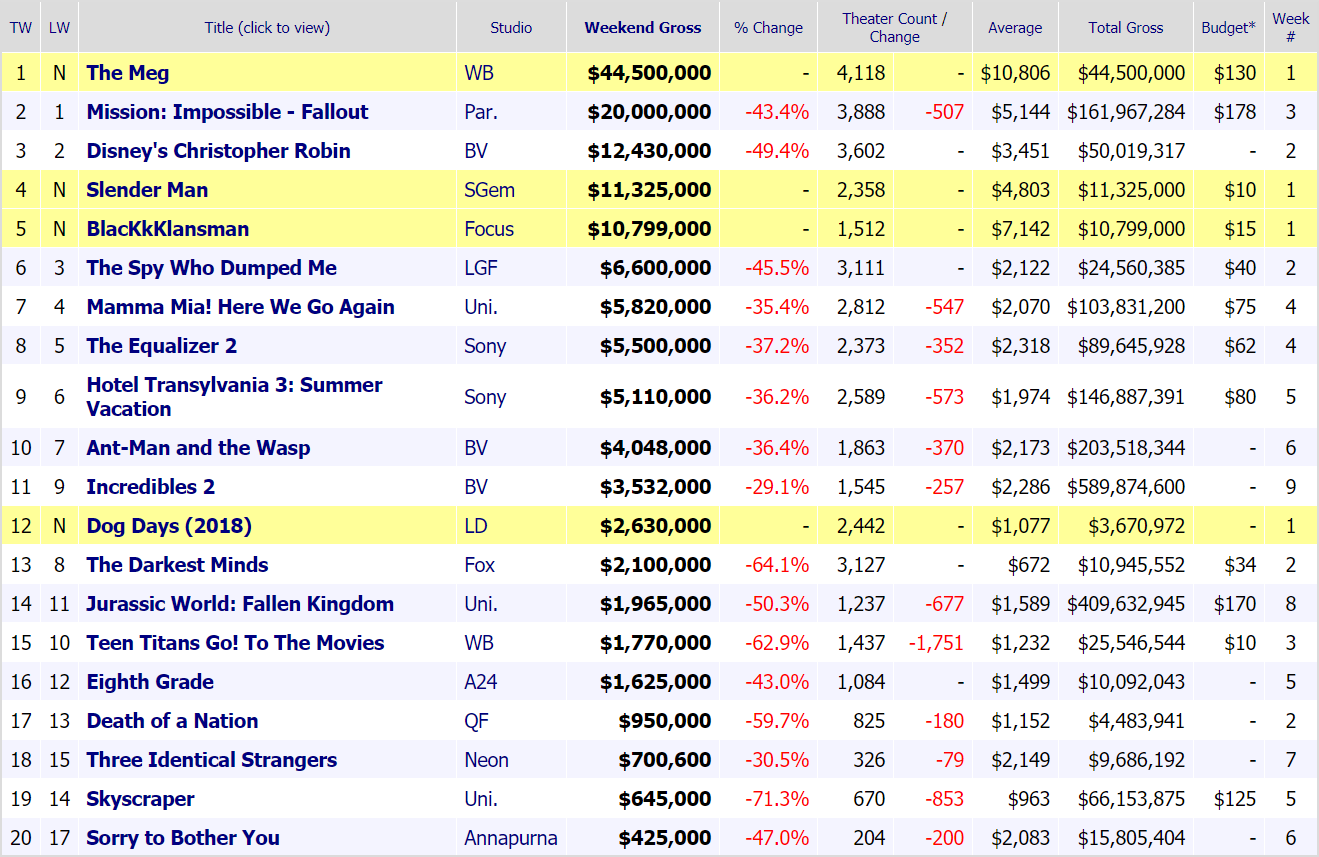 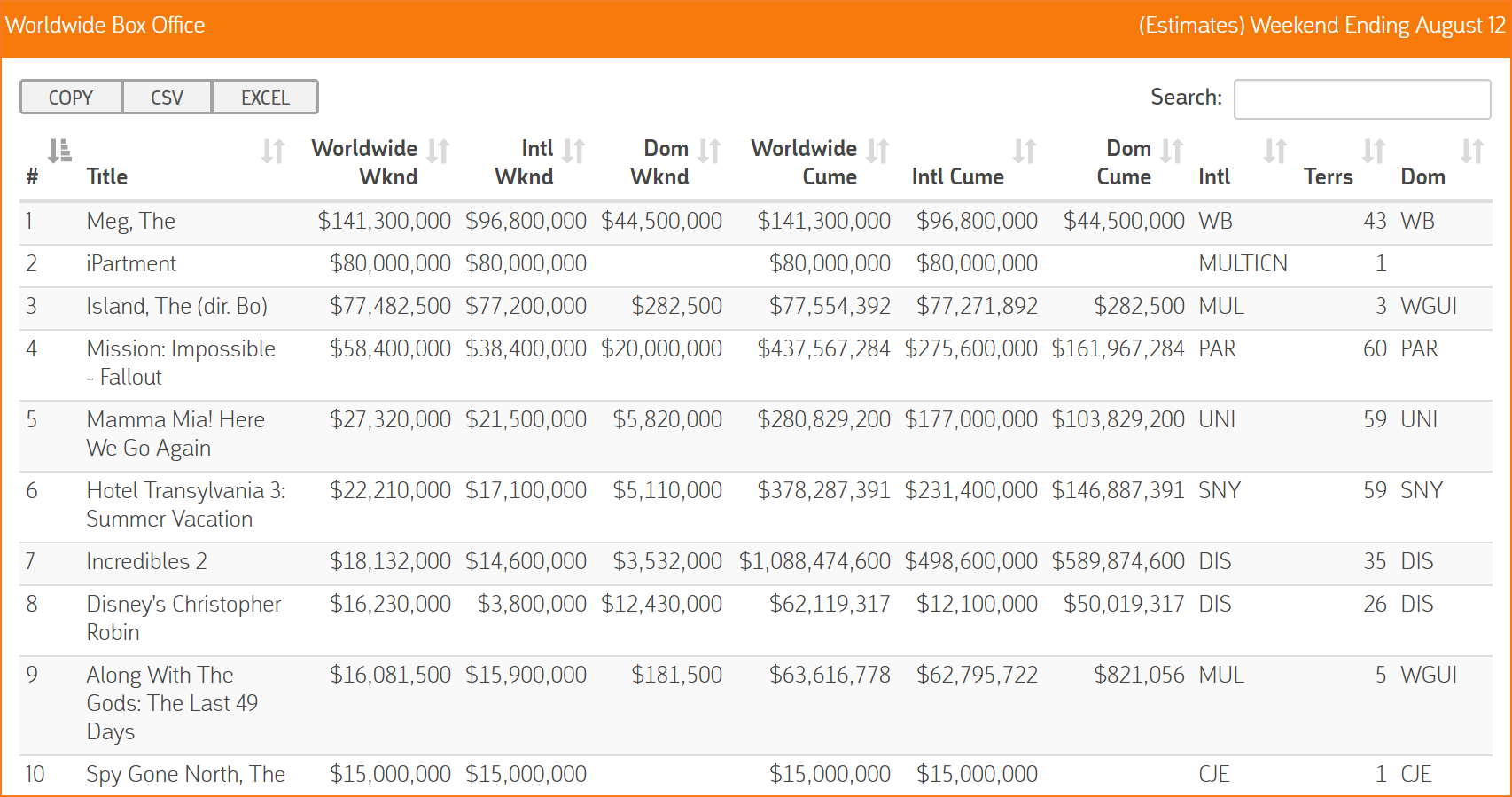 Didn't the meg cost like 150 million? To be clear, I really want to see it lol

I can't watch giant shark CG movies anymore
Deep Blue Sea ruined it all for me.

Trying to make time to see Eighth Grade. Supposed to be very good

It's right there, 130M. Also that's an INSANE number for such a movie.

"The Meg"? Not having seen any ads for it, I have no idea what it's about. Sounds like a movie about a woman comic or something.


Actually better yet why?

When I saw the trailer for The Meg I was like here we go Piranha 3D all over again but I heard it's actually legit.

Damn. Didn't realize the new MI was so universally acclaimed. The last couple were decent. I'll check it out when it comes out on video.

It's too bad about Sorry to Bother You it deserves more theaters.

Does Marvel not like Paul Rudd? It just seems like they kicked him in the nuts with how they handled this movie.
Last edited: Aug 14, 2018

DiscoJer said:
"The Meg"? Not having seen any ads for it, I have no idea what it's about. Sounds like a movie about a woman comic or something.
Click to expand...

The trailer looked horrible. It's like a high budget Sharknado.

The Fallout is awesome!! Loved it ...

Took my kids to see Meg it was ok...like not horrible but not good by any means

Gander said:
It's too bad about Sorry to Bother You it deserves more theaters.

How? The movie made over $200 million in America alone.
S

Whoever saw Slenderman prob wants their money back.
You must log in or register to reply here.