Recently, I've been binging through an adult cartoon that actually feels like an adult cartoon for once. Close Enough on HBO Max. You might have heard of this series at some point, or rather the person behind it. Close Enough comes from Regular Show creator J.G. Quintel, and has had quite the production history. Like Regular Show, this series was produced by Cartoon Network Studios, but not for Cartoon Network. Rather, initially, for TBS who picked up the series in 2017 shortly after Regular Show ended. It was set to anchor TBS' new animation block alongside Final Space and The Cops. Plans for that block eventually fell through though, as The Cops was abruptly cancelled thanks to a #MeToo scandal involving Louis C.K. and Final Space ultimately ended up on Adult Swim. After TBS' parent company Time Warner (now WarnerMedia) was purchased by AT&T in 2018, Close Enough was put on Ice for a whole year until 2020 where it became a launch title for HBO Max, now on its 2nd season with a third coming soon. 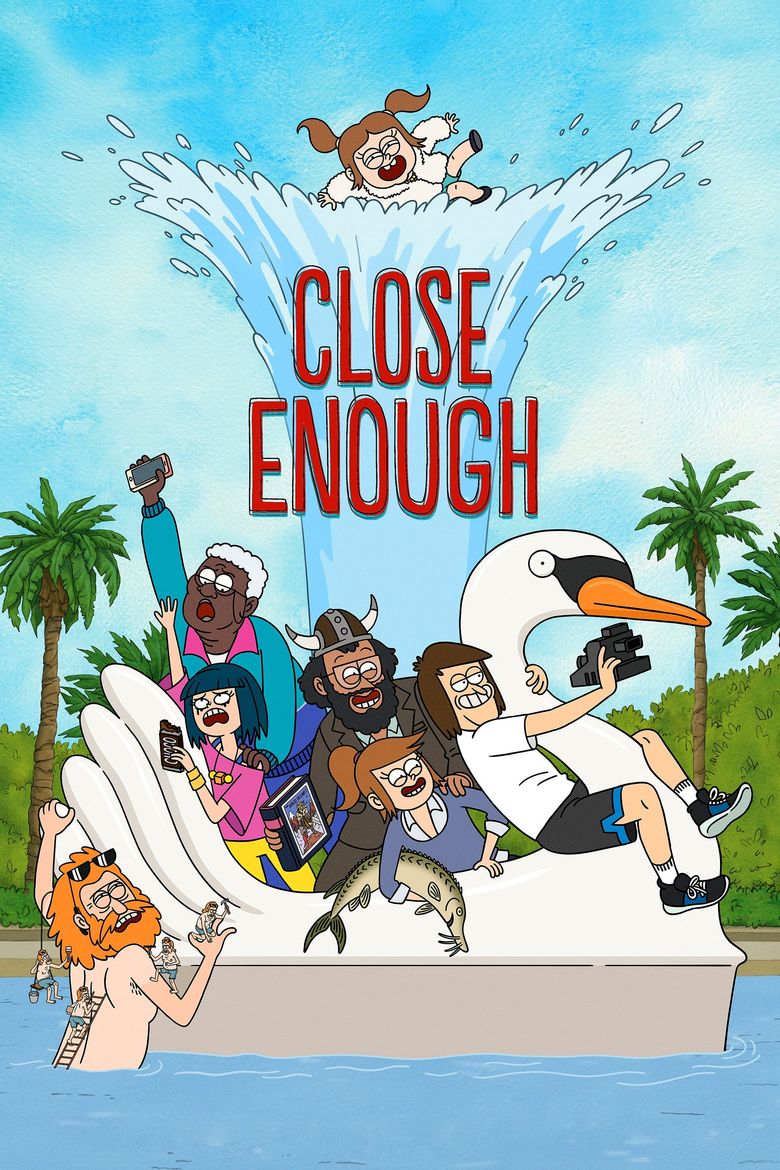 The show follows a young, early thirtysomething couple, Josh and Emily, with their Kindergarten daughter Candace, living in an apartment with best friends/divorced couple Alex and Bridget. Each episode follows a mundane parenting/thirtysomething dilemma ending up spiraling out of control in a variety of bizarre and supernatural misadventures. The episode format, humor, and character dynamics are all very much like Regular Show, so if you loved that series, you'll feel right at home with Close Enough's writing style. That said, the show has enough differences to not just make it feel like Regular Show with humans.

For starters, now that Quintel is unshackled from the Standards and Practices of children's programing, Close Enough contains much more mature and risque content than Regular Show, and Regular Show got away with a lot if you grew up with it. Characters swear, have implied sex, and consume drugs and alcohol. However, the show uses these elements tastefully, and in plot relevant ways. The problem with a lot of so-called "Adult" cartoons is that they often feel like they have try too hard prove they're not for kids, so they over-compensate by shoving in as much sex, gore, and other fucked up shit to try and shoo kiddies away from it, even if it comes at the cost of quality or ethical standards. But Quintel understands that just because you can have your characters say shit and bang each other, doesn't mean you always have to. This allows the show to focus on issues that are actually relevant to adults, such as one episode where Emily is trying to get high in order to relieve the stress of having to be a young parent.

That also brings me to the second major difference between this and Regular Show, the plots themselves. Josh and Emily are a bit older than Modecai and Rigby were in Regular show, and as such, the textures of their issues are different as well. Whereas Regular Show at its core, was a show about being a disaffected twenty something putting up with crappy job and an annoying boss to make ends meat. Close Enough is ultimately a show about the growing pains of becoming a parent. The problems that arise and the difficulties raising a family can be when you're just barely in your thirties. The cool youthful shit you used to do when you were 23, now seems harder to go back to at 32. As such, the problems Josh and Emily face are very different from Mordecai and Rigby's. Issues such as sacrificing spring break to make sure your daughter doesn't fail Kindergarten, or worrying about getting too old too fast, and trying to stay young for a little while longer. the focus on a much younger family gives the show a unique flavor compared to other adult family-sitcoms.

The cast is also fantastic, Josh and Emily have a similar dynamic to Mordecai and Rigby. Two youthful fun-lovers putting up with a less-than ideal scenario, with one being the more responsible (Mordecai/Emily) and the other being more the slacker type (Rigby/Josh). But again, there's enough differences in the characters that it doesn't feel like Regular Show part two. Josh at first, seems like the "idiot father" you see in dozens of shows like this ala Homer Simpson or Peter Griffin, but the more you watch the show, the more he's nothing like that. He's actually a very caring father who, while not the smartest, is clever and resourceful enough to get the gang out of trouble when he needs to. Any idiocy he may possess is more slight air-headedness than pure stupidity. Emily is the responsible workaholic, but we see that workalosim can be a burden on her, as she can come off as too nice for her own good at times. Their friends, Alex and Bridget are also funny as well, and in season two we get several episodes dedicated to them, as do we with Josh and Emily's daughter, the 6-year old Candace, who is very charming, and very similar to what a real Kindergartener would say and do.

So if you loved Regular Show, then this may not be the sucessor you asked for, but it's still... CLOSE ENOUGH. I'll see myself out.
Reactions: J-Roderton

Where's the muscle man character?
You must log in or register to reply here.