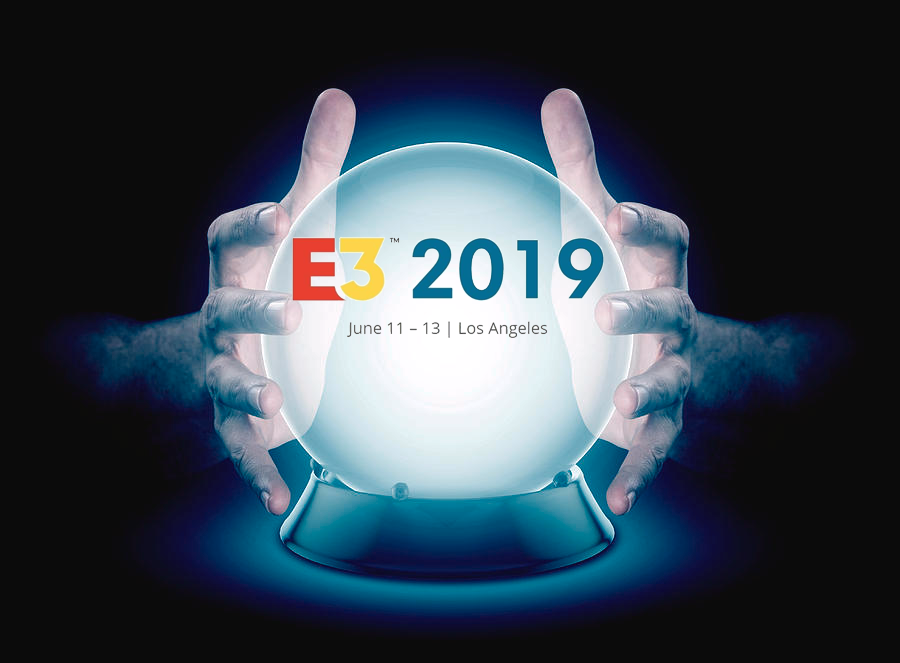 It's almost time for the gamer mecca digital voyage of watching press conferences and reading press releases, watching trailers and learning about how we will all go broke in the upcoming months.

Get out your crystal balls and post your E3 and outside of E3 announcement predictions from publishers and console manufacturers.

Prey 2's coming back, baby. Bethesda and Human Head Studios will make amends and release the game of my dreams.
Reactions: Night.Ninja

Husky said:
Prey 2's coming back, baby. Bethesda and Human Head Studios will make amends and release the game of my dreams.
Click to expand...

There is a chance for a Prey 2 but human head is busy and will probably be developed by Arkane Studios again if anyone. Maybe it will take place on mars this time ??
Last edited: May 28, 2019
Reactions: ResilientBanana, Isa and Baron Samedi

I predict Giant Bomb's "coverage" will become even more awkward and sad.

And Skate 4 of course...
Reactions: Griffon, DonF, Coolio McAwesome and 3 others

I predict a lot of cringe as executives and developers (not PR people) come out on stage in t-shirts and try to make awkward conversation with the audience and/or other guests.
Reactions: NickFire, DonF, Musky_Cheese and 5 others

There is a chance for a Prey 2 but human head is busy and will probably be developed by Arkane Studios again if anyone. Maybe it will take place on mars this time ??
Click to expand...

it's not Prey 2 if it's not the game we saw at E3 2011
Arkane's property has nothing to do with the Prey games I adore, they just share a name

I didn't even watch it last year because I just couldn't stand Giantbomb's coverage of 2017. However, the couch bits with Dave Lang, Johnny V and Adam Boyes are always hilarious. But I have heard that this won't happen this year...

My prediction for the Death Stranding Trailer is that some character will say something about being kept waiting. And for the COD:MW trailer there will be captain price shouting at the screen in glorious HD. As well as shooting and warning of an atomic nuke by the russians and how the politics of USA was invaded via social media.

In years gone past I've stopped caring but I'm genuinely interested in Squenix's FFVII stuff this time round.

And Death Stranding, I guess. Not that I think the gameplay will reveal anything.
Last edited: May 28, 2019

No one shall be brought before our LORD David Bowie without the true and secret knowledge of the Photoshop. For in that time, so shall He appear.

Animal Crossing is all I’m hoping for at this point.

But for my wild predictions:

Just give me that Animal Crossing.

This is an odd take, as they about theydon't really "cover" it anymore, and Jeff has even talked about not attending anymore multiple times as there's no real need to be there these days.

Games I want to see:

Every xbox fan cheers and they win the console wars.
Reactions: Munki

Okay time to do my reasonable expectations and predictions for E3 bit. So far I have never been let down.

- Guaranteed The Legend of Zelda Collection for Nintendo Switch
- Obviously Silent Hill 5 from Konami bringing back Team Silent. Graphics better than if The Last of Us 2 had RayTracing
- New Generic Ubisoft Game
- Newell Gabe giving us Half Life 3
- Also Portal 3

- Gabe also loves Left 4 Dead 3 (just kidding nobody would believe that)
- I also expect there to be a Metal Gear Solid Collection for PS4, Xbox One and PC.
- Various Nintendo Switch ports like Metal Gear Rising Reveangence for Full Price $60.
- Enough DLC for Mario Kart Deluxe 8 with 41 new maps

- You also should be hyped for Bloodborne 2
- On top of Grand Theft Auto 6 with female protagonist and you can travel between all cities. The game is huge I tell you.
- Unexpectedly The Witcher Zero. Ciri adventure taking inspiration from Uncharted Two Ladies edition.

- Nintendo announcing Super Metroid in the Nintendo eStore. $60 Full Price
- EA announces Anthem 2 Early Access in EA Kickstarter beating their own record at having you pay money for an unfinished mess.
- Valve is not announcing Artifact 2 to my knowledge.
- Elders Scrolls 6 with 2022 release date for next gen console.
- Rockstar shows Bully 2 and Agent at the Xbox conference

- Last of Us 2 gets a trailer during E3 but not at Sony with a release date in October.
- EA shows a full reveal of Star Wars Jedi Fallen Order. 2019 Release date !
- Titanfall does not show up.

Nintendo has confirmed it'll be covering games coming out this year for E3. They already have a boatload of games lined up for the second half of this year (Marvel Alliance, Fire Emblem, Mario Maker, Daemon X, Astral Chains, Zelda, Luigi's Mansion, Animal Crossing, ignoring Pokémon because that's getting a separate Direct soon) so they'll show more of those games, maybe talk about Smash DLC and not much else. Animal Crossing will be delayed to spring 2020 and eventually to autumn 2020.

Come for the games, stay for the cringe.
S

New Borderlands 2 DLC that will tie into BL3
Last edited: May 29, 2019
Reactions: JohnnyFootball
A

Probably new FF7Remake stuff will be shown at the FF7 Symphonic Reunion concert.
I guess we could hypothesize that.

Also a lot of hype for the game that Jun Takeuchi teased back in Dec 2018
Is it going to be RE3Remake? Dino Crisis comeback?
Definitely going to have a heart-attack if Dino Crisis 4 trailer pops up. The circumstantial evidence leans towards Dino Crisis.

Jun Takeuchi is the head of Capcom Development Division 1 (where RE7, RE2Remake and DMC5 were made)
http://www.capcom.co.jp/ir/english/company/officer02.html

Q: May I ask as to the plans of Development Division 1 from now on?

Takeuchi : Our first priority is to get RE2Remake and DMC5 out there in the market to everyone. From there onwards, how we will proceed will be defined by the feedback that we receive from our customers and userbase. It is going to be for us a careful listening of comments and remarks such as "It would be great if you did that", "We would really love to see this" etc. We are presently honing our skills and pushing the envelope in terms of what we can actualize and substantiate as developers, since I think that when we are to talk about the next RE game and anything else it should mark the era of a complete overhaul. Then again, currently we have been working on another game that will take people aback and make them jump off their seats by surprise thinking "What? They're making that one?"
Click to expand...

They actually teased Dino Crisis back in Dec 2017 on their official twitter account.
They said that they might bring it back, if there was considerable demand for the Dino Crisis series.

I love this time of year.

So many games I'll likely never be able to play, but will still become irrationally excited for.
Reactions: Zannegan, J-Roderton, S1L3NT SH0T 419 and 1 other person

Guiberu said:
I love this time of year.

So many games I'll likely never be able to play, but will still become irrationally excited for.
Click to expand...

This is exactly me!


I'm really looking forward to Microsoft revealing their next console and what their plan for the future is. Even though I haven't had much time to game lately I'll always stay up to date on what's going on in the industry. Also hoping Sony does something offsite to talk about the PS5 as well.
Last edited: May 29, 2019

I'm fully expecting Sony to sit back and watch what Microsoft does with announcing their new console and than based off that randomly announcing theirs, they would love to undercut them on price again I'm sure.

And still no metroid hd.

I bet there are going to be games shown at E3. That is my prediction, and I know it will be 100% correct.
F

Can you add UK times to the OP. Thanks.

Frank Spencer said:
Can you add UK times to the OP. Thanks.

Yeah there is a chart that lays out all the times. Adding it now.
Reactions: Frank Spencer

Frank Spencer said:
Can you add UK times to the OP. Thanks.

Emil from the nier universe announced for smash.
Reactions: Guiberu

Found what I posted a while back. Couple things already on/off the table, updated, expanded a little.

What I want:
What I expect:
honestly though WoW Classic is 3 months away and I've lost 90% of my interest in other games right now
Last edited: May 30, 2019
Reactions: IncognitoPanda

Some good stuff in here.
N

You know, Sony not being at E3 did not seem like a huge deal to me 4 months ago. But in hindsight E3 impressions can have major impacts (looking at you Kinnect 2 and TV, TV, TV). So they can't really be planning to let MS have all of the spotlight right? Any official word on what they will be doing outside of E3?

Luigi's Mansion 3 seems like it could be cool. Coming from a new Switch owner.

I can’t wait to last of us 2, gears 5, halo infinite and battletoad !

Not predictions exactly, but what I want to see (beyond the obvious we already know we're getting a lot of coverage on e.g. Cyberpunk, Jedi Fallen Order):

We probably won't get jack squat on most of those. Oh well.

Ive gotten disappointed by E3 for about the last 4 years. However, I'm cautiously hopeful this year. This is the year of potential redemption for SO many.

Now, hopefully they have been humble enough to look at their losses and FINALLY realize it's time to listen to their audience.

I'm hoping both need consoles are announced this year and we get a bunch of exciting games announced.

Additionally, we're nearing the peak of a lot of games that have been built up: Death stranding, Halo infinite, and Gears 5 come to mind. That means we'll probably get some good gameplay footage this year. I'm not going to get over hyped, because I'm usually let down, but I'm hopeful.
Last edited: May 31, 2019
You must log in or register to reply here.