Final Fantasy X and X-2 coming to PC May 12th

About This Game
FINAL FANTASY X tells the story of a star blitzball player, Tidus, who journeys with a young and beautiful summoner named Yuna on her quest to save the world of Spira from an endless cycle of destruction wrought by the colossal menace Sin.

FINAL FANTASY X-2 returns to the world of Spira two years after the beginning of the Eternal Calm. Having been shown a mysterious but familiar image in a sphere, Yuna becomes a Sphere Hunter and along with her companions Rikku and Paine, embarks on a quest around the world to find the answers to the mystery within.

Based on the international versions of the games that were previously only released in Japan and Europe, FINAL FANTASY X/X-2 HD Remaster brings these timeless classics forward to the current generation of fans, old and new alike.

Characters, monsters, and environments have been fine-tuned to HD detail, providing a richer, deeper FINAL FANTASY visual experience.
Other features in the PC version include remastered/rearranged BGM,
International Edition content,
Auto-save and 5 game boosters including high speed and no encounter modes.
Click to expand...
WOW

Alright Square you got me this time
C

Hopefully that's not a mistaken date like with IX.

Much sooner than i expected.
R

Fuck, am I going to have to buy this remake for a 4th time?
T

That's far earlier than I was expecting.
D

Really surprised at how fast this is coming out.
J

Woah. And in just two days! This is amazing.

What FF are we missing, PCGAF?
S

Legit tempted to finally get a new desktop.
D

Good news,I hope this leads to XII coming too.
M

KingBroly said:
Really surprised at how fast this is coming out.
Click to expand...
They really need the money.
A

Oh damn, way sooner than I expected. X HD was awesome on PS3, so I'll get around to finally playing X-2 with this.
J

Did the PS4 / Vita releases have the boosters advertised?

Auto-save and 5 game boosters including high speed and no encounter modes.
M


I need it now pls Square.
Click to expand...
maybe that's why they've been holding off on it? get every FF to PC before XV launches, and finish releasing them with the same one they haven't yet for consoles

Corpekata said:
Did the PS4 / Vita releases have the boosters advertised?
Click to expand...
new features for PC only

First post in the Steam discussions for this game!
C

KingBroly said:
Really surprised at how fast this is coming out.
Click to expand...
Gotta get this out before E3 where they announced the FF12 remaster duh
K

HERE WE GO BABY.
B

I paid $10 for it on ps4 and still haven't opened it. Will definitely grab it on pc, too. Square is milking the crap out of me with this game, I also have it ps3 and ps2.
H

Joey Ravn said:
Woah. And in just two days! This is amazing.

What FF are we missing, PCGAF?
Click to expand...
Just XII. Which is one I'm more interested in than X.
N

One of these days we will get KH on PC.

They're moving fast. FFXV PC next week then?
M 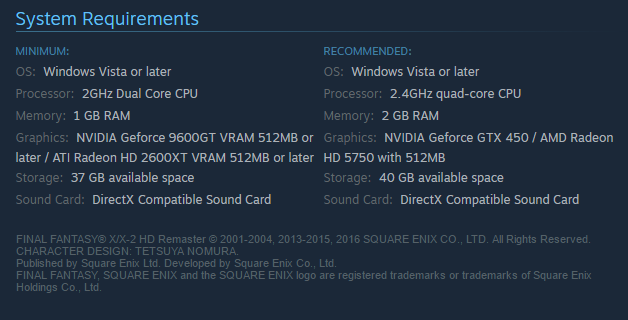 So whats it gonna cost?
I

Guarantee I'm going to screw up this post? Yeah.

Will buy somewhere down the road.

I'm so torn. I have it on PS4 (Steelbook Tin) and I'm happy with it, but with the chance to get it on PC with (potential) 60FPS Support and (confirmed) Japanese Audio, that's tough.
P 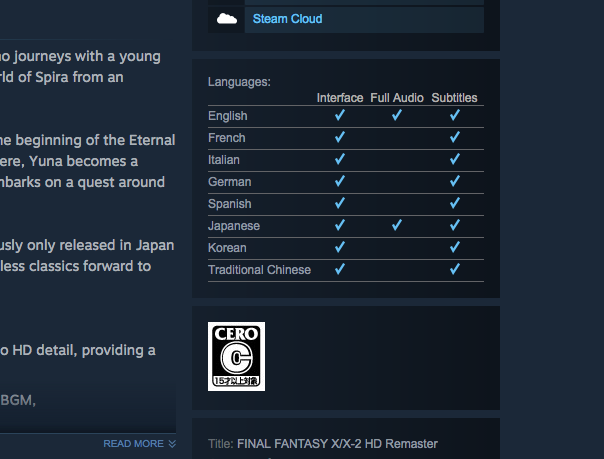 I better be able to delete the JPN Audio!!!
D

I wish no encounter and high speed were in the vita / ps4 releases...
N

Htown said:
Just XII. Which is one I'm more interested in than X.
Click to expand...
I and II aren't on Steam either.

Square buying Eidos was the best thing ever as they embraced the PC market even more after the acquisition. Great news.
B

Does the ps4 version have this?

Auto-save and 5 game boosters including high speed and no encounter modes.
Click to expand...
H

I'm positive XV is coming to PC at this point, they're probably gonna release it with the PS4Neo rerelease.
V

Auto-save and 5 game boosters including high speed and no encounter modes.
Click to expand...
Neat
L

Napalm_Frank said:
One of these days we will get KH on PC.
Click to expand...
Trying getting KH on anything digital first. Disney is so weird about it.

BluePumpkin7 said:
I'm positive XV is coming to PC at this point, they're probably gonna release it with the PS4Neo rerelease.
Click to expand...
There is a rumored PC build and PC version logos on websites, they aren't fooling anyone.
V

Is it available in Japan? Seems it has full Japanese voice and text which is usually rare for Japanese games on steam. Will buy.
G

When/if Kingdom Hearts arrives I will be slain. Either to PS4 or PC, I'd take either tbh.