Here's the big Gaikai news or at least one of the announcements (Samsung cloud gaming service on their Smart TV range). All you need to do is update the firmware on exiting Samsung Smart TVs. I don't think Sony is buying Gaikai at all.

It's a Samsung Smart TV, playing high-end PC games like The Witcher 2 without so much as a set-top box; they're delivered solely over the internet. More importantly, it's an existing TV that's already on sale, with only a firmware update on top. "We don't need special chips or hardware," Perry tells me, adding that the update has been in the works for over six months with engineers flying to and from Korea in the interim. Today, it&#8217;s just an experiment laid bare on a table, but next week it becomes real: At the Electronic Entertainment Expo in Los Angeles, Samsung will formally announce a partnership with Gaikai to introduce a cloud gaming service for its high-end televisions, and roll out a private beta soon afterwards.

That might not immediately sound like a game-changing announcement, but Gaikai executives are over the moon: Samsung is arguably the world's largest tech company &#8212; "There isn't a bigger deal to do in cloud gaming," says Perry &#8212; and it's not Gaikai's first rodeo. Samsung rival LG already committed to updating every one of its 2012 Cinema 3D television sets to include Gaikai back at CES, and the company believes it's going to be a strong differentiator. Back in Gaikai's spacious glass conference room, Perry has me imagine two TVs on a wall: "The TV on the right plays every video game ever made, the one on the left doesn't. The cost difference is nothing. That's why we think it's going to be compelling."
Click to expand...

However, to use a favorite expression of Perry's, there's a twist: If you've got a Samsung Smart TV, you won't be playing on Gaikai proper; You'll be playing on Samsung's Cloud Gaming service, powered by Gaikai's network. While Gaikai facilitates the transaction, negotiates rights to particular games, integrates them into the service, builds the UI, and even puts the physical server racks together, it's Samsung that's footing the bill and Samsung that reaps the rewards. Samsung will get a cut of the purchase price, just like a brick and mortar retailer would. The secret, the company tells me, is that each new partner pays for their own set of dedicated servers in Gaikai's cloud, such that every time there's a new company, the whole network expands that much more and thus lowers the latency to end users. Each partner that isn't using their full capacity at a given moment leaves that much additional bandwidth for others to stream their games, and as a result, Gaikai claims its service is now live in 88 countries. In short, while Gaikai is almost definitely competing with OnLive at some level due to the expanded focus, it seems like the company is still true to its roots: it's a business-to-business firm, and thus it's not a centralized Gaikai that's expanding, so much as a slew of prospective grey-label providers using Gaikai's network.
Click to expand... 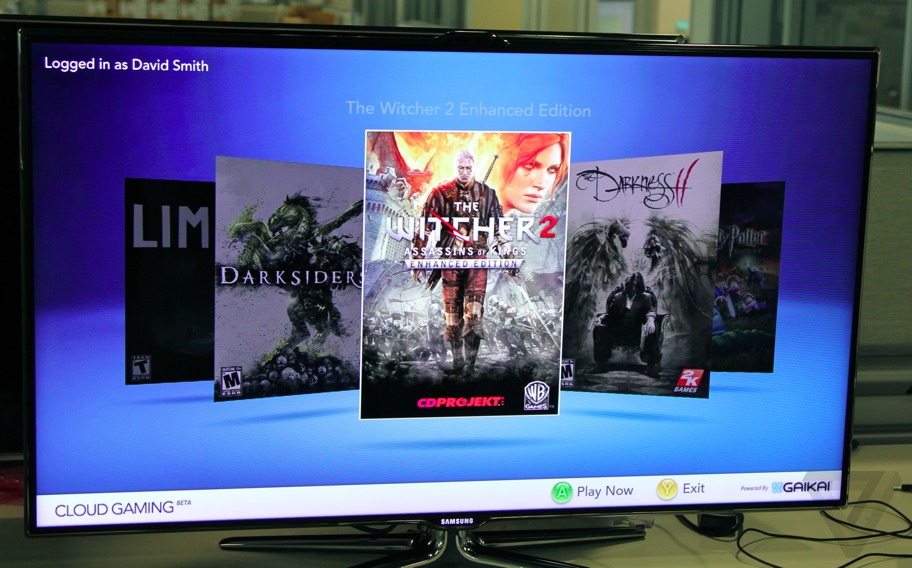 If would-be customers don't have a Wikipad or a USB controller, though, how will they control their games? One of the major challenges for cloud gaming services like Gaikai is figuring out how to deal with the growing popularity of devices that only have touchscreens. Here, though, Gaikai has aces in the hole: Brendon Iribe just so happened to be the president, CEO, and co-founder of Scaleform before its acquisition by Autodesk last year.

Gaikai engineer David Coles lets me take the rudimentary touchscreen UI for a spin, and while it's not particularly impressive at this early stage &#8212; just a virtual D-pad and some buttons &#8212; the vision is rather neat: You'll use your tablet as a touchscreen controller for your Gaikai-equipped television, then press a "Takeover" button and transfer the whole session to your tablet screen so you can take your game with you.
Click to expand...

That controller pic is awful.
M

Crap... this probably means it's Onlive, which is awful.
J

1)Sony just published a game rating system that could be used with Gaikai. (requires a stand alone application outside a browser but using browser libraries)

3) Interactive eBooks for children is going to be announced at E3.

The Application side XMB being used by less resource intensive features that don't need the SPUs for shader features to support AAA games can be used to support Voice and Gesture recognition as well Web browser with voice and gesture. The Interactive eBooks for small children is a "casual use" and small children will need a simpler interface.

What TVs can support the PS3 can do better.

Samsung and Sony paralleling each other in support for a web browser may include HTML5 desktop (implementation will be different) as well as Android app support from XMB. See also this post where Samsung in Tizen is using GTKwebkit2 just as Sony is using GTKwebkit2 in Vita, PS3 and other Network connected CE equipment.

Sony to embark on 'Storyteller' ebook initiative at E3

A PS3 ebook strategy will be unveiled by Sony at E3, MCV understands.

This content will form another sub-section of Sony&#8217;s PlayStation Network Store &#8211; the rejuvenation of which is expected to constitute a large part of the company&#8217;s E3 offering.
Click to expand...

This content will form another sub-section of Sony&#8217;s PlayStation Network Store &#8211; the rejuvenation of which is expected to constitute a large part of the company&#8217;s E3 offering. Which could mean more use of the browser libraries and SVG as well as HTML5 <Video> for user instruction, Gameplay and features explained with video and more.

Looks like it's pretty much confirmed that a $199 PS3 will be announced for E3 as well as a revamped PSN store with lots of new things to sell. This probably explains all the new patents published and Maintenance for the PSN. E3 2012 should be awesome! Tools (webkit libraries) are in place to support this. Many features held back for a big splash at E3 when the Wii U is going to be introduced? 4.0 features finally shown?
P

jeff_rigby said:
This content will form another sub-section of Sonys PlayStation Network Store  the rejuvenation of which is expected to constitute a large part of the companys E3 offering
Click to expand...

Well,Sony's Game business has pledged to lift its operating income margin from its current level of around 3.5% to as high as 8% in FY14.In order to achieve its goal,Sony plans to preserve the PS3,which is PlayStation's breadwinner,revive the PS Vita and strengthen and expand the network services

jeff_rigby said:
Looks like it's pretty much confirmed that a $199 PS3 will be announced for E3
Click to expand...

Will be announced at E3 or maybe a little later.Sony acknowledges that the PS3 is still very expensive,and since they're making a considerable amount of money off PS3 software sales,they will pass on cost savings to the consumer.

If you look back at the history on PS1, PS2 the vast majority of the business that we did on both those platforms was done at the sub £129 price points. Now weve only got to £199 in the UK a couple of month back so you can see theres still a lot of PS3s potentially to be sold.

I think youll see us taking the console more towards a slightly younger demographic. More family market. The core gamer will absolutely not be neglected. Theres going to be tons of great stuff for the core gamer but from our own studio, third parties theres some quite interesting stuff happening in a number of areas which would allow us to open up a market that we accessed pretty successfully on both PS1 and PS2 but havent yet got to on PS3.
Click to expand...

The measures contemplated in the three-year plan should bolster the profitability of Game before launching the PS4 during the fiscal year ending March 31,2015 (FY14).

PS3 in its current stage of the life cycle, still I think are in kind of mid-stream, the life of the platform, the momentum is still very strong..so as the installed base grows as you know we make a lot of money on the software side and I think this trend will go on for another hopefully several years. .So were not in kind of desperate need mode to have a next-generation coming to the business.
Click to expand...

Trends of 2012: What the Analysts Say

"Gesture and voice control will become more commonplace, which in the future could help the industry overcome some of the challenges of interfacing with games apps using unresponsive and clumsy existing TV controllers." Pronounced Pachter: "This is the most impactful area for 2012, although it's not focused on gamers, per se. Rather, the focus is on converting other members of a gamer household to users of the home console, and Microsoft has a lot of things planned this year.

"Ultimately, the Xbox 360 and PS3 could be used as TV tuners (we'll see that this year), and will continue to beef up their content offering for over-the-top internet TV."

"Browser-based gaming will continue to grow," decided Divnich, "especially as developers unlock the potential of HTML5. But I don't believe HTML5 gaming really begins to capture mainstream attention until 2013/2014. There are still plenty of bugs to work out in the HTML5 technology."

Harped Harding-Rolls: "The mobile social network games opportunity in the West has yet to burst into life - 2012 looks a safe bet for this to happen.

Tell us of Facebook, browser and social games in 2012
"In 2012, the debate over whether free-to-play works will move on. It clearly works," Lovell let us know. "Now the issue will be how to do it better, how to bring it to new genres, how to address the ethical issues of over-exploitation and how to balance fun and creativity with revenue and metrics-led design. Unfortunately, costs are spiralling (both in development and marketing) so innovation will get more expensive.

"The biggest influence will be that social games will pursue better graphics. This is both creatively and financially pointless, but is inevitable, so I guess we just have to accept this enormous waste of time and money.""
Click to expand...