Foshy said:
seriously? Did they seriously have hope for that one?
Click to expand...

I don't recall Capcom ever throwing Gaist Crusher under the bus after the original game's release. They might just be calling the entire thing a gigaflop now since it's over.

1) Minecraft PSV finally getting a retail release in Japan, in March. Don't have a link though, saw it this morning on Twitter. A bit too late, I'm afraid.
Click to expand...

- As it was expected, Devil Survivor 2 is the most sold game of the week.
- Far Cry 4 for PS4 sold better than expected and some shops faced stock problems. With enough stock the game could have topped the ranking.
- BladeStorm sold well too.
- PS4 started to increase due to anticipation for Dragon Quest Heroes at the end of February.
- Tsutaya expects PS4 hardware to increase from now until the awaited launch.
Click to expand...

Some good news for PS4.
K

Better late than never I guess. Interesting to see how it performs. Weird that they don't release PS4 version at the same time.
N

Three of those were added this fiscal year, and DQM was last fiscal year, so it seems they're improving notably on this front. 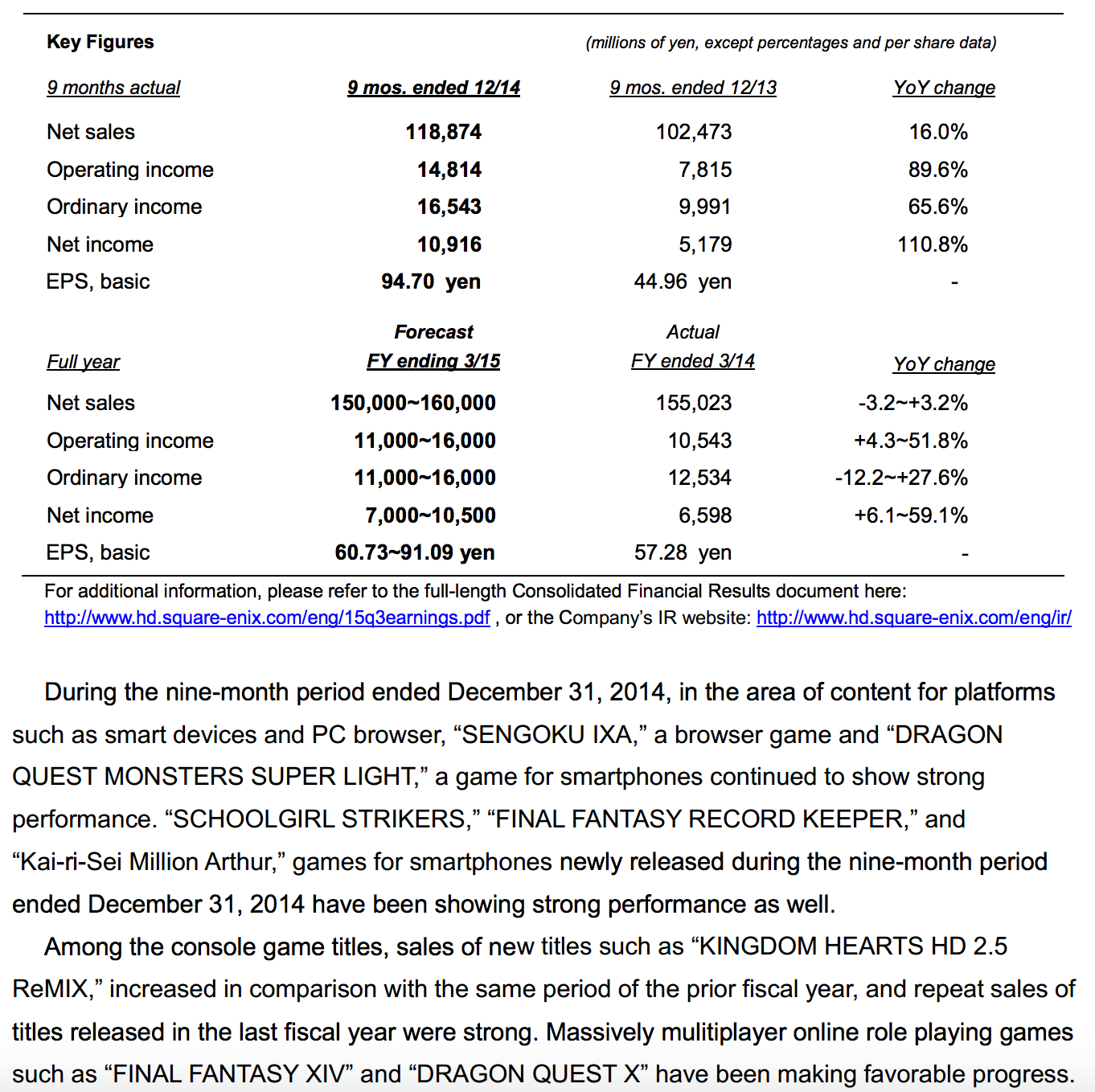 For Capcom, they explain their performance as follows:

In the Digital Contents business, sales of the special feature title Monster Hunter 4 Ultimate (for New Nintendo 3DS
and Nintendo 3DS) were largely in line with the plan and sales of Ultra Street Fighter IV (for PlayStation 3, Xbox 360,
and PC) targeting overseas markets were also solid, reflecting its strong popularity. In addition to the satisfactory sales of
Dead Rising 3 (for Xbox One and PC), which was a million seller in the previous fiscal year, an online game Monster
Hunter Mezeporuta Kaitakuki made a robust start. Furthermore, a steady increase in the sales volume of digital
download sales contributed to profits due to their high profitability.

On the other hand, sales of a major title Gaist Crusher God (for Nintendo 3DS) were below expectations. Moreover,
there was a lack of major titles among Capcoms mobile phone contents with certain exceptions including Monster
Hunter Freedom Unite for iOS, although the overhaul of the profit structure contributed to profitability improvement.

If they're going to miss their target, it won't be by too much, it seems.

&#12539; In spite of new franchise, THE LEGEND of LEGACY sold 54 thousand copies (initial digestibility rate: 83.00%), coming second on the chart.
It was actively advertised that the staffs who had developed SaGa franchise involved in its production. Retailers told that it was mainly purchased by fans of SaGa franchise, so it seems that it successfully attracted fans of that franchise, as the maker targeted at.
Click to expand...

Yeah, slightly better than what I was expecting (35k-50k).
N

LOL Nice one... Ive been watching Shark Week a lot already. Whats up with the Andy Samberg commercials though? Seems a little out of place to me...
You must log in or register to reply here.