Shizuka said:
OLED is still beind sold on a few stores.
Click to expand...
I hadn't been able to find it in my area for months, even during christmas. I'm in NYc btw.

I bought my 2nd when amazon had got those very small quantity of limited white oled.
D

Why did Vita get such a huge bump? In line with Wii U during Mario Kart launch month? How in the hell?
O

HariKari said:
X1 will be fortunate to outsell the Wii U at this rate. What, exactly, do you think they'll be taking?
Click to expand...
The X1 outsold the Wii U in a month in which they killed their own sales and the WiiU had a couple days of Mario Kart help. The X1 won't be outselling the PS4 next month, but lets stop with the "fortunate to outsell the Wii U" hyperbole too
G 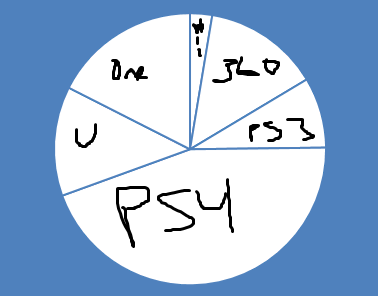 Click to expand...
switch PS3 to Vita and switch Wii to PS3
P

Dr. Feel Good said:
Why did Vita get such a huge bump? In line with Wii U during Mario Kart launch month? How in the hell?
Click to expand...
Borderlands 2 bundle.
F

PeregrinSe7en said:
honestly im just saying that to counter a previous posters claim that it wont. no one can see into the future of these consoles so its silly to say it will or wont reach a certain install base.
Click to expand...
Umm? No shit.

But why do you think these sales threads exist? It's to estimate and pinpoint how the sales of certain game and game platforms will hold up. And for investors to see if putting your money into a stock for a company will be viable or not. Henceforth why I made my own personal prediction.
O

So is consensus bone is doomed in here?

Watch Dogs split is interesting, Destiny is probably going to look something like that, if not worse. It's not the exclusive content that does it but marketing. Wonder how Evolve and CoD shake out this fall as those are the two MS has marketing deals with.

PS4 domination continues, great stuff from Sony. Glad to see there is one console that is really leading the way into this new generation. Not surprised about XBO's poor numbers in May and I'm not sure why anybody would be. They announced the price cut knowing full well May would be a throwaway month, June will be interesting. (though I doubt it'll be much better)

Plinko said:
But the other two major consoles are selling much, much worse than their precious iterations.
Click to expand...
Wii is (which is expected), but Xbox One is still trending slightly better than PS3 did early on.

I fully expect the Xbox One to "get back in the game" in the US, similar to how the PS3 also had a turn around and started doing respectable numbers.
S

Lynn616 said:
I think that has a lot to do with the long console cycle. I think both will see a severe drop off in sales from here.
Click to expand...
So much crow will eaten during the fall.
N

No PR spin from Yusef?

gketter said:
Due to their love of shooting themselves in the foot.
Click to expand...
And that has absolutely no bearing on this conversation.
O

Jaded Alyx said:
Welcome to GAF
Click to expand...
NeoGAF? Can you stream that? Imru&#8217; al-Qays;116916431 said:
But isn't the part of the audience that's being siphoned away the part of the audience that was only there last generation to begin with?
Click to expand...
It started being born with late PS2 era games like Guitar Hero, blossomed last generation, and then got stolen away by Apple and Google this generation. If MS, Sony or Nintendo had been savvy enough, they would have been able to keep that large, growing, highly profitable market segment; they were not. It's not really an insult, though, as Apple and Google are two of the most competitive companies right now.

The important thing here is that last generation wasn't a "bubble" or anything. It isn't that the audience suddenly came and then just as suddenly went away; that would imply that they left gaming entirely. Instead, these gamers came... and then were stolen away from consoles by gaming platforms that are better at serving their preferences and tastes. Those gamers are still around, they just don't care about the Xbox One or PS4 or Wii U very much.
C

I have mixed feelings on these console sales. PS4 sales are OK but everything else is bad. I have a feeling that summer NPDs aren't going to be pretty.
S

Click to expand...
Hmmm, now we got handhelds. Cream is sitting back and having a good laugh while we squirm.
T

Plinko said:
And that has absolutely no bearing on this conversation.
Click to expand...
Of course it does. They created undesirable products through design and cost. People just don't buy consoles just cause.
K

I think a huge amount of people are waiting for the holidays to buy current gen consoles. There are barely any games coming out until the holidays too.
L

Click to expand...
We got a new one with 3DS and PSV included
V

Dr. Feel Good said:
Why did Vita get such a huge bump? In line with Wii U during Mario Kart launch month? How in the hell?
Click to expand...
new model released bundled with memory card and BL2
D

Pennywise said:
Borderlands 2 bundle.
Click to expand...
How does the port of a year and a half old console game cause a bigger bump than Mario Kart?
B

StoopKid said:
So much crow will eaten during the fall.
Click to expand...
yes. Or January, when Batman is released.
C

Plinko said:
This is disastrous. Wow. That's a colossal market contraction.
Click to expand...
If you ignore the fact the PS4 and Xbone sold way more in their first two months. But who's silly enough to... Oh.
F

This is too much.

Dr. Feel Good said:
How does the port of a year and a half old console game cause a bigger bump than Mario Kart?
Click to expand...
May 6th vs May 30th
L

How low do the PS3 and XBox 360 numbers have to be before they drastically reduce the price?
Z

suppadoopa said:
so has the x1 finally overtaken wii u
Click to expand...
It did the month of Titanfall iirc. Anyways, it already has though in the US.
T

Total new home consoles sales this month didn't even exceed Wii's number alone in May 2007. Add in the other two and you have total market contraction on the order of around 200k units.

It's only going to get worse from here on out. By next year PS3 was seeing a resurgence, Wii was really taking off, and 360 was finding a strong second place position.
O

Busaiku said:
It's hard to tell Wii U, Vita, and 360 apart.
Click to expand...
They are all within a few thousand of each other, so it makes sense. No need to split hairs, just gotta figure out the broad strokes.
C

gotstrangepowers said:
switch PS3 to Vita and switch Wii to PS3
Click to expand...
Then where's the 3DS?
L

creamsugar said:
Well, here is the biggest news this month, Vita is back to life, FPS bundle 56k.
Click to expand...
I am late to the party but holy shiitttttt. Trampled all expectations!
I

Tripon said:
Guess we're back declaring the video game industry is dead.
Click to expand...
And it's right after a great E3. How depressing.
P

The NPD thread is now a Professor Layton game.
B

Dr. Feel Good said:
How does the port of a year and a half old console game cause a bigger bump than Mario Kart?
Click to expand...
It didn't.

Vita OLED had been dried out for months.
E

plop said:
Xbone price cut didn't take effect here. Next NPDs will see the return of the king.
Click to expand...
Nah the king is perched atop his rightful throne right now.
S

I'd measure it but I uninstalled ImageJ.
K

Click to expand...
How many picarats is this puzzle worth?

Thunder Monkey said:
Total new home consoles sales this month didn't even exceed Wii's number alone in May 2007. Add in the other two and you have total market contraction on the order of around 200k units.

It's only going to get worse from here on out. By next year PS3 was seeing a resurgence, Wii was really taking off, and 360 was finding a strong second place position.
Click to expand...
Wii shouldn't really be included in the analysis, as that market was something completely foreign to either the 360 or PS3 audiences, largely, and has not been recaptured by the Wii U. They have moved on to mobile platforms.

I don't see how it's going to get "much worse" from here on out, when Microsoft has already taken some necessary steps to improve their situation in the US, and there's a huge amount of titles releasing in the fall that will usher in more current-gen adoption.

Then you have the impact of normal price drops, improving lineups, and last-gen die off.

There could ultimately end up being a slight contraction for the 360 + PS3 market, but current sales numbers (which have dwarfed the previous gen's early adoption numbers), don't indicate that at all yet.
T

Are you people actually expecting Wii's success to carry over? The casuals came for a couple years and left after they got bored of Wii Fit. Wii was a bubble.
F

I'd measure it but I uninstalled ImageJ.
Click to expand...
I agree with this answer
K

Chezzymann said:
Then where's the 3DS?
Click to expand...
he's wrong anyhow, since Vita and Wii U were close.
S

SwiftDeath said:
All right everyone break out your protractors and turn to page 45 in your neogaf textbook

Can someone clarify something for me?

How much of a difference potentially does the fact that Watch_Dogs came out on 27/5 make to bundle sales on PS4? When did this NPD window end?