PBateman said:
I've talked now with Sony Italian Assistance,they told me fw 4.50 will be available from 9 March.
Click to expand...


So I emailed playstation support about image drift problems that I'm still having. I briefly asked at the end on the email if 2.40 would fix this.
While their reply gave a list of things to try they ended it by saying,
"With the release of System Software 4.50 tomorrow, there will be a patch to version 2.40 of the PS VR firmware. I do not have specifics on what the patch contains, outside of support for 3D Blu-Rays."
I'm not expecting the update to fix it but looks like we can look forward to it sooner rather than later
Click to expand... 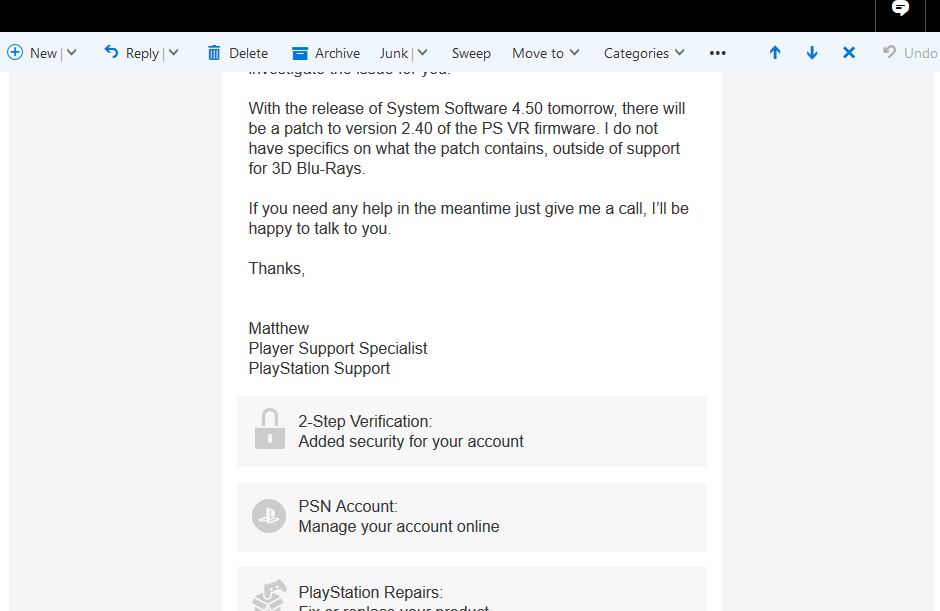 Expect an official Sony announcement in a few hours

I should buy a Pro.
R

Is Beast mode still gonna be a thing?
C

DarkestHour said:
I should buy a Pro.
Click to expand...

Yes. Yes you should

I'm glad everyone can enjoy using an external HDD, its awesome.
S

Bummed that they ruined the notifications tab with 4.5, but other than that it's all good.
N

*the boost is not that big
M

Oh man I hope this is true I can't wait to activate boost mode on my Pro. Was also looking forward to adding an 4tb external drive too but the stutter issues with games played off the external drive is putting me off. Anyone know if a fix is coming for this issue?

Yes! I can finally install all the games!
B

Media Player also needs an update too in regards to VR. It could be so much better than it is now.
E

Come on PS Blog, give us an official confirmation.
L

Beast Mode for EVERYONE!
K

Just in time for my B6 to arrive Wednesday.

Yay I can finally use Remote Play again.
B

Should be receiving my 4TB external this week, so the timing isn't too bad.
A

Wonder if they fixed the external HDD issues? But great news! Boost mode has been a God send since I started to play The Witcher. That locked experience. In fact every single one of my games has been locked since it.

This is your time to play AC Unity people, it's a whole new world.

Not sure I like the thread title. This isn't confirmed.
R

This may be a silly question but how well do 3D movies actually display on a VR headset?

KevinG said:
Just in time for my B6 to arrive Wednesday.
Click to expand...

Were the folks experiencing stutter on the external all using SSD or was it both?
S

how do you update the psvr?
K

I look forward to boosting tomorrow. So much boost.

Hoping they make it more prominent. It's buried in the system settings in the Beta so not surprised if a lot of people outright missed it.
R

So with the release of 4.50, what are the most highly recommended external drives to use with your PS4 Pro cause I'm in the market for one now!

will this also include the custom wallpapers?

It's about time!
K

MarcusAurelius32 said:
Jealous I'm saving for a 65" B6 and I'm not buying Horizon till I get it
Click to expand...

Same. Not playing Horizon yet.
M

Oprah Winfrey uncaging the beast and giving it out to everyone...

KevinG said:
Just in time for my B6 to arrive Wednesday.
Click to expand...

Sweet. I feel like the only Pro owner who didn't get in on that beta.

Zulithe said:
So with the release of 4.50, what are the most highly recommended external drives to use with your PS4 Pro cause I'm in the market for one now!
Click to expand...

countless threads about this dude

Booker.DeWitt said:
how do you update the psvr?
Click to expand...

mitchman said:
Nice, my 65" B6 arrives on Thursday!
Click to expand...

That jump will be huge.
M

More than a member.

Coxy100 said:
countless threads about this dude
Click to expand...

Give a link then dude

Maybe I'll take the same as my Xbox one
B

so it is not automatic? I think I never updated mine since I got in November, LOL
You must log in or register to reply here.

A.Romero replied
Mar 3, 2022
Ready Or Not launching into Early Access by end of 2021
News Platform

IbizaPocholo replied
May 1, 2022
The State of PlayStation Studios With SIE acquiring Bungie and more, let's take another look at the state of Sony's first-party studios (IGN)
Opinion 2