Opinion Business Switch Could Enjoy An Extended Lifespan And Even Outsell The Nintendo Wii, Claim Analysts. Switch Could Enjoy An Extended Lifespan And Even Outsell The Nintendo Wii, Claim Analysts

Analysts are claiming that the Switch could defy expectations and enjoy a prolonged lifespan, with some even going as far as to say that the console could surpass the Wii in terms of lifetime sales.

The predictions come off the back of estimates compiled by Bloomberg which suggest the Switch could sell around 9.46 million consoles and 64.73 million units of software in the quarter ending December 2019. That marks a software sales jump of around 23% over last year, while hardware remains about the same.

It's worth noting that Switch is heading into its third Christmas and, in a traditional console cycle, sales have a habit of dipping around this time. The fact that Switch is expected to maintain its momentum suggests to some industry analysts that the console's lifespan could be longer than expected.

Kazunori Ito, an analyst at Morningstar Investment Services in Tokyo, said this:

This is typically where sales begin to peak out, but it looks like the Switch may have a longer life cycle. With a desktop console and a portable player in a single machine, Nintendo has a very effective platform for selling game software.
Click to expand...

All of this positive news has even convinced Wedbush Securities Inc. analyst Michael Pachter – previously one of Nintendo's sternest critics – to suggest that the console could overtake the incredible sales milestone set by the Wii:

The Switch can sell 20 million units annually for the next three years. So it should easily get to 100 million.
Click to expand...

Macquarie’s Thong thinks this could be optimistic, especially as the games market has changed since the days of the Wii and a lot of 'casual' players have moved onto tablets and smartphones. Still, he believes Nintendo has the momentum to continue selling tens of millions of consoles, even when the Switch reaches the latter part of its life cycle:

2021 might be an even bigger year for title launches. There is a new Zelda game and it will be time for a mid-cycle refresh for all major Nintendo titles.
Click to expand...

I can see it. The way Nintendo has been putting on a few big holiday titles every year since launch, along with the fact they have 2 models out now, yeah its doable for sure.
R

Can we not?
Reactions: Zannegan

Isn't the Switch behind the 3DS if you include the 3DS XL and 2DS ?
I think combined they were around the 60 million mark, three years after it launched.

Little early to say but it's definitely a possibility and something Nintendo is aiming for. They want this thing to be around for a decade, whether or not that pans out is hard to say, plenty of unknowns could cause a shift in Switch sales and longevity.

McRazzle said:
Isn't the Switch behind the 3DS if you include the 3DS XL and 2DS ?
I think combined they were around the 60 million mark, three years after it launched.
Click to expand...

I'm pretty sure the only place Switch is behind in is Japan, everywhere else it is up.

Also I found this 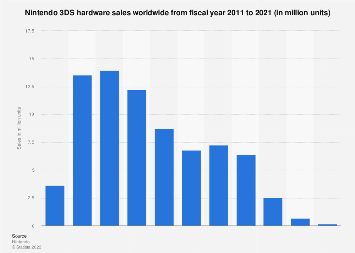 This statistic shows the number of Nintendo 3DS hardware units sold worldwide from 2011 to 2020.

This would indicate that 3DS reached 60 in its 4th/5th year on the market.

I dunno, I think sales will eventually slow down a bit once next-gen comes out. Reaching GBA/PSP sales numbers would already be quite impressive.

Or maybe the Pokemon/Animal Crossing combo gonna make everyone go nuts over it, like it did with the DS. And maybe the alleged Switch Pro gonna make people double or triple-dip. Nintendo have many tricks up their sleeves to make that prediction happen.
Reactions: Stilton Disco, Godzilla Emu and Shaqazooloo

I doubt it given that Nintendo always traditionally moves onto the next Console by the end of Year 5.

Third Parties moving to the PS5/Scarlett will force Nintendo to make new Hardware to keep relevant in the arms race.

Of course Nintendo can also ignore Third Parties and keep making their own games but without the breadth of Third Party software after the Switch can't handle PS5/Scarlett ports the Switch wouldn't last with just Nintendo's line up alone.

Of course I personally want the Switch to last a decade but I doubt it will be the case.
Last edited: Dec 3, 2019
Reactions: Stilton Disco

Outselling the Wii seems like a bit of a stretch, but the DS did have a ton of hardcore followers.

Interesting. Seems foolish to say given Nintendo's history but I'm not sure how they could improve upon the Switch in its current state. Unlike Sorny and Michaelsoft, it doesn't feel as if any of their games require higher horsepower to be more successful. I could see them releasing a lot of new games from their big IPs for Switch... especially interesting because they're expanding on BotW and it's been a long time since they released two NEW Zelda games on one console.

i hope the switch lasts a long time. i love the console.

in fact i'd love if "Nintendo Switch" wasn't just a one off console but meant the same as "Microsoft Xbox" or "Sony Playstation". You could have the Switch, Switch 2, Switch 3, etc. It would be perfect because they could have the traditional switching Switch and dedicated handheld/docked Switch models.
Reactions: Shaqazooloo

Switch Pro confirmed!
Bring that switch family!
You must log in or register to reply here.

Jan 6, 2021 started Bodomism
Jan 6, 2021
Marcus Aurelius
2 3
Business Sales-Age Platform Nintendo Switch surpasses the million and a half units sold in Spain and is once again the most shipped console of the year