Goddamn is this show good and I love the cast, especially the leads. Keri Russell looks so damn fine in this show.

I started the first 4 episodes of season 1 when the show started, but lost track when my DVR died and erased my backlog of episodes. I finally caught up through amazon prime and just started season 2.
R

Linius said:
There's also Fargo. Too bad The Strain and Tyrant are meh and they cancelled The Bridge.
Click to expand...

oh yeah I forgot about Fargo. season 2 is so far away though..
C

- Rotten Tomatoes: A Guide to Binge-watching The Americans

Also, one more new image that's been floating around:

Matt Fowler said:
It was a safe bet, but the first two Season 3 episodes of #TheAmericans are excellent.
Click to expand...

I'm currently trying to figure out which S2 episodes to rewatch before the new season. I'll check out the premiere and the finale, plus a few in the middle.
C 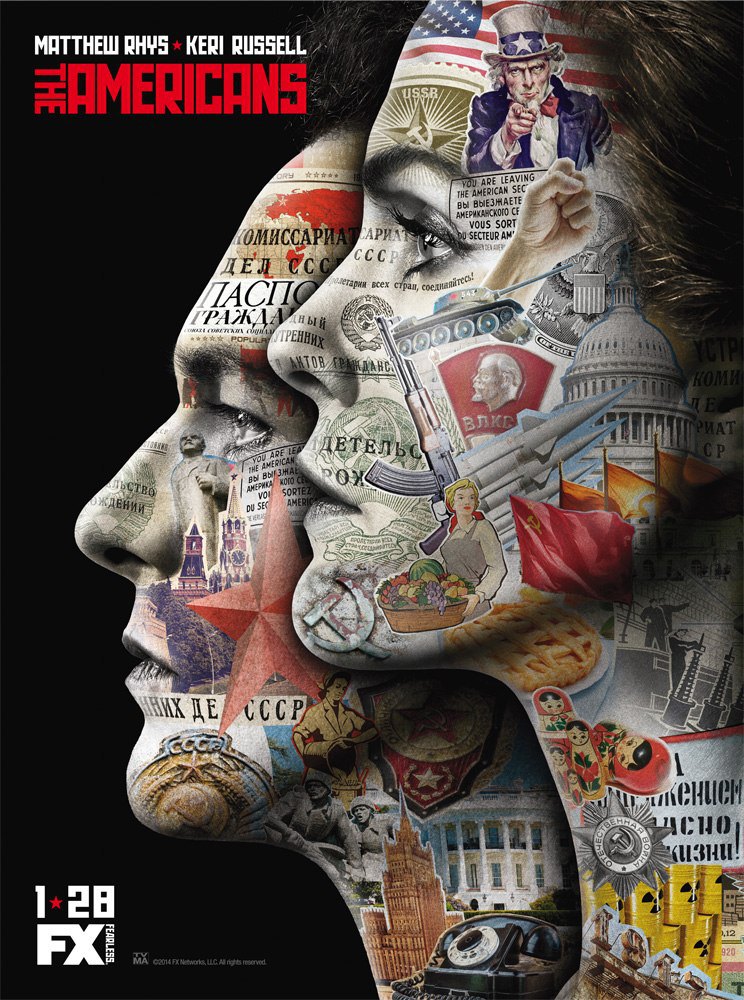 Didn't they lose their entire network of agents? Wonder how long after this season takes place and how they restored all that.
B

I wonder if the next season will involve Aldrich Ames - in the trailer we see Brezhnev's death and Ames' betrayal of the CIA started around the same time. He was also posted in Washington.
C

just finished S2. Man, this show. I love how it successfully portrays two characters you shouldn't root for, and make you root for. I mean, i couldn't wait for either of them to kill
Larrick
, who's just got that fucking smug face. Random thoughs

- this second serie's gotten way gloomier than the first. I suspect they really wanted to portray the Russians as more maliciously evil than in S1

- the guy who plays Arkady is boss. Seriously, fantastic acting and presence

- I finally realized who plays Beeman's boss. It's that guy from that hillbilly tv show about that family with a truckload of sons

- Emmerich's acting has finally gotten better. He's still leagues behind Rhys and Russell, but at least he can wipe that stupid smirk off his face now


I kicked off my S2 rewatch with the first episode. That massacre at the end is brutal. I had forgotten about Paige walking in on her parents, too. I think I'll skip forward to Ep 3 or 4 for my next one.
S

- the guy who plays Arkady is boss. Seriously, fantastic acting and presence
Click to expand...

All of the Russian (speaking) actors were fantastic in season 2. I'm so glad the series didn't wimp out and have them all speak english to each other with russian accents.
I

- A couple of teases from Yahoo's Winter TV Preview:

Coming Up:
Philip and Elizabeth Jennings have their own issues with their jobs, but what happens when the KGB wants to put their teenage daughter to work for the cause? "We take right up with that conflict bursting out into the open, and it's going to be very rough," EP Joe Weisberg says. Adds EP and co-showrunner Joel Fields about how Paige's recruitment affects the Jennings' relationship, "Last season, they were in the best place they'd ever been in their marriage. [But] what happens to a relationship put under that kind of pressure? Can you truly love each other and yet be in conflict over the most important thing in your world?"

Further Intel: Oleg's back, Nina's alive(!), and Stan is still haunted by the actions he did &#8212; and didn't &#8212; take regarding his KGB lover last season. And while Margo Martindale might return as Jennings handler Claudia, for now they have a new &#8212; actually, old &#8212; handler in Frank Langella's Gabriel. "Gabriel was their handler for a long time. They're happy to have him back, and they love and trust him," Weisberg says, "but he's back with the hardest assignment he's ever had, which is to help guide them through the recruitment of their daughter."
Click to expand...

ITV will not be acquiring any further seasons of the FX Cold War spy drama starring Keri Russell and Matthew Rhys, TVWise has learned exclusively.

The commercial network originally acquired The Americans in a two-season firm deal with international distributor Twentieth Century Fox Television Distribution in January 2013, making its the first US scripted drama they had acquired for the main ITV channels prime-time schedule since Pushing Daisies in 2008.

The decision not to acquire the third season from Fox comes after ITV sources told TVWise in July 2014 that there was a difficult decision to be made about the future of The Americans. Insiders admitted that, while the show was a favourite of Acquisitions boss Angela Jain, the ratings performance was such that they couldnt justify the cost of licensing any further seasons.
Click to expand...

What does that mean for the Americans?
P

I would buy the shit out of that poster.

What does that mean for the Americans?
Click to expand...

Nothing if you're not in the UK.
C

SKY SAVE US
C

One spoilerish tidbit on S3 from EW:

Q: Any chance someone will discover Philip and Elizabeths real identity on The Americans this season?

A: That question will be ever present within the first five minutes of the season premiere when Elizabeth lands herself in a compromising position that may raise Stans suspicions. At least well get to see Keri Russell kick major butt, so theres that.
Click to expand...

- TV Guide's Winter TV Preview with a few tidbits on what's coming up:

Where We Left Off: After helping Phillip and Elizabeth kill Larrick, Jared revealed in his final breaths that he had killed his family and was being recruited to the KBG by Kate. Claudia confirmed this to the Jennings  and that the Center is eyeing Paige as its next recruit. Elizabeth is all for it, but Phillip says nyet. Stan decided not to give up the Echo program, thus selling out Nina, who's being brought home to stand trial for treason.


What's Next: Season 3 will pick up shortly after the death of Leonid Brezhnev in 1982 with a major focus on the war in Afghanistan and parenting. As Paige grows more suspicious, the Jennings will still be at odds over whether to tell her about their true identities, let alone allowing her to join the, uh, family business, resulting in Phillip blatantly disobeying orders. Nina is still alive, but back in Russia, which leaves Oleg lost and confused. Frank Langella will recur as Gabriel, who comes out of retirement to be the Jennings' handler.
Click to expand...

Watching the first season. Man this show is good.
C

Just binged Season Two on Amazon Prime. Another great season. I'll definitely be keeping up with Season 3 as it airs.
A

I'm going in blind, no trailers for me.
R

That is absolutely FANTASTIC!
C 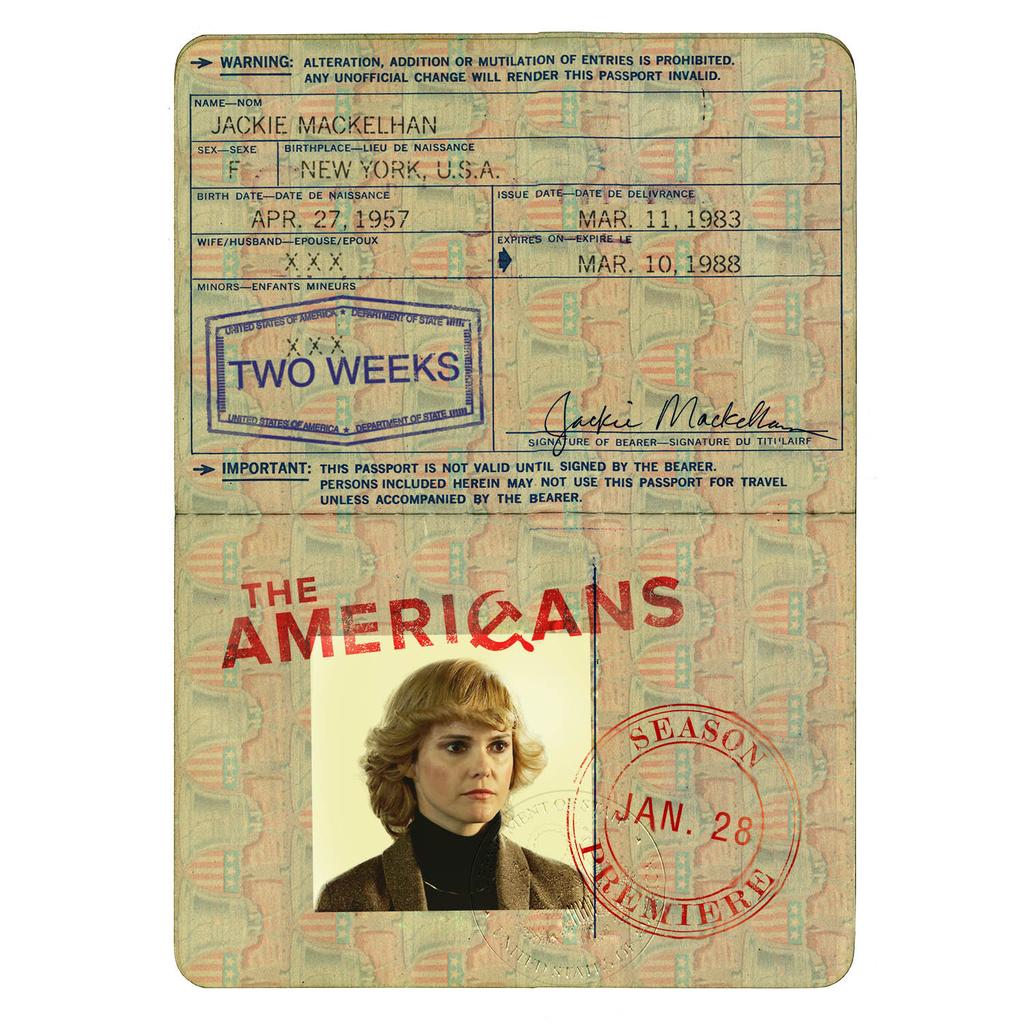 I rewatched "Martial Eagle" last night. Great episode that included Philip's tirade about the bible after they find out Paige donated money to the church. Pretty excited to have this show back in a couple weeks.
R

Cornballer said:
Pretty excited to have this show back in a couple weeks.
Click to expand...

Joel Fields posted a pic of a poster sized version that they're putting up in the writers' room: 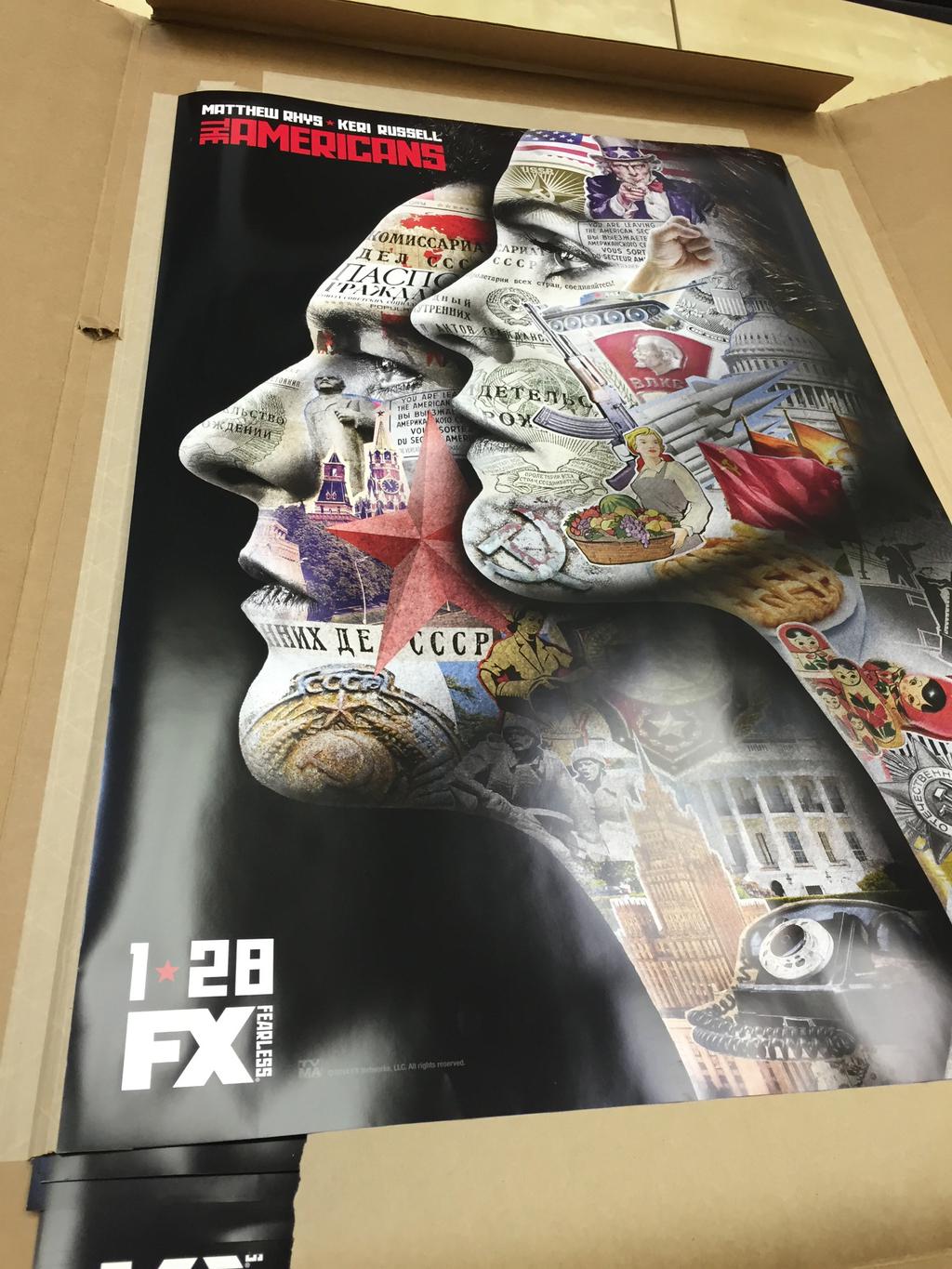 Cornballer said:
I rewatched "Martial Eagle" last night. Great episode that included Philip's tirade about the bible after they find out Paige donated money to the church. Pretty excited to have this show back in a couple weeks.
Click to expand...

Finished season 2 about a week ago and wow, this is definitely one of my top 10 shows. Can't wait for s3.
C

Cornballer said:
Joel Fields posted a pic of a poster sized version that they're putting up in the writers' room:
Click to expand...

How about they make it so that we can buy that poster.
C

Thanks for that. I'll definitely need to watch those because I don't remember much of what happened last season.
C

HitFix said:
What is the long-term prognosis for "The Americans," a critical favorite, but not a huge hit? "I think it'll be at least five," Landgraf says of the likely season length. "I sure would like to see the Emmys finally step up to take notice," he says. "We're not really a channel that's trying to be the highest rated channel on television," he says. They're trying to be the best channel, so the network can support shows that push them to that goal. He returns to "The Bridge" as an example of a show that was still declining after 26 episodes, forcing him to be the bad guy.
Click to expand...

Very good they can properly set up everything for the ending.
M

Can't wait for season 3. One of the absolute best shows on TV right now.
R

- EW: With a few quotes from today's panel
G

He's right, I actually think FX is the most solid channel of the moment. It has a lot of fantastic shows. If I had to choose a channel and only watch shows airing on it, I'd go with that one.


maquiladora said:
Can't wait for season 3. One of the absolute best shows on TV right now.
Click to expand...

Yes, season 2 was what I loved the most last year on TV. It was engrossing and really well acted. Can't wait for more.
C

I hope the writers and the showrunner finish the show on their own terms. Anyway. I love this show, can't wait for the new season.
C

A few more quick takes on the TCA panel: