Twitch going out of its way to promote "boob streamers" ??

Twitch has a new "feature" on users' personal Following page that supersedes other, more pertinent info like your list of followed games called "Based on your viewing history" Some people, including myself, have noticed that many of us are getting recommended the same half dozen or so "boob streamers" regardless of our actual viewing history... 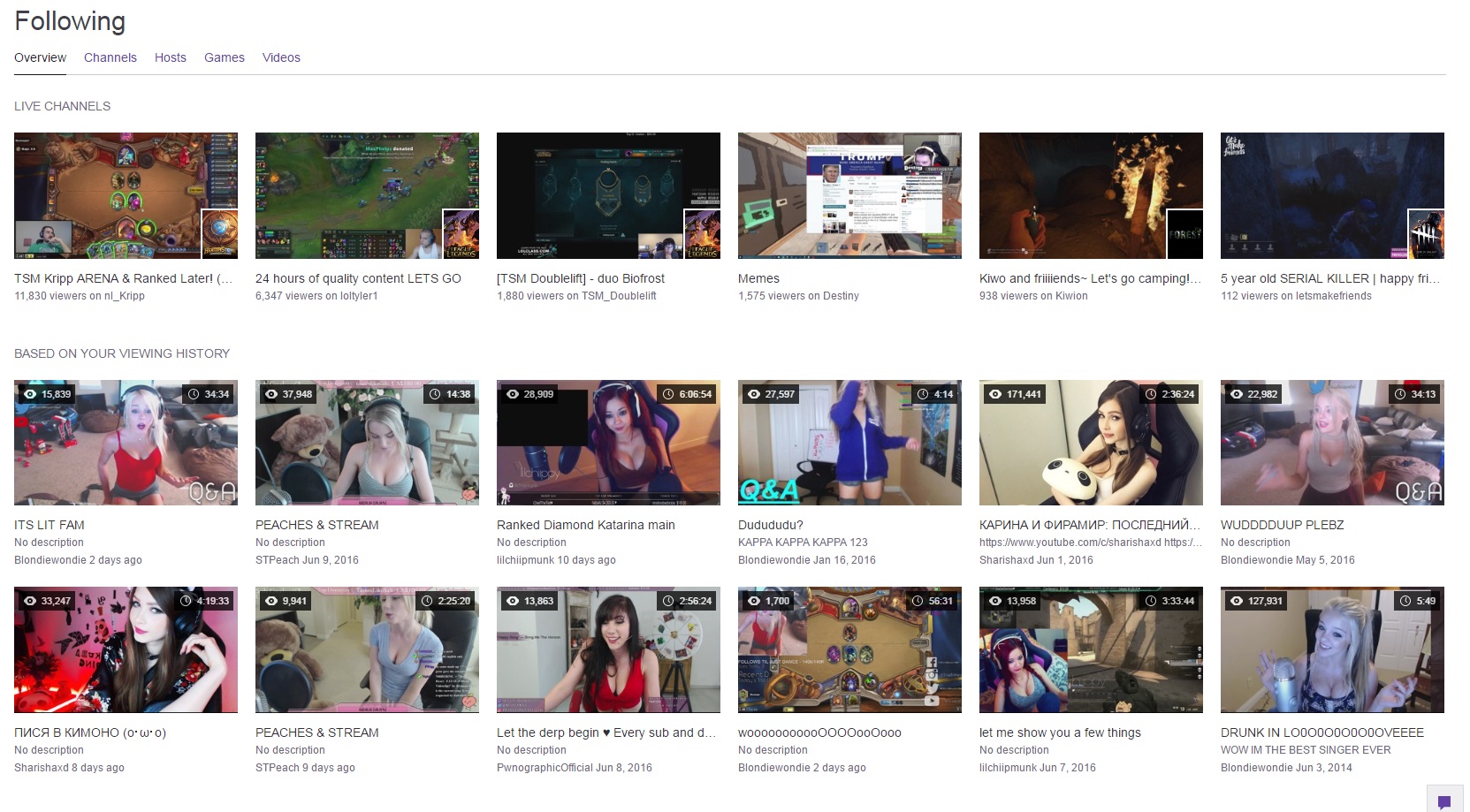 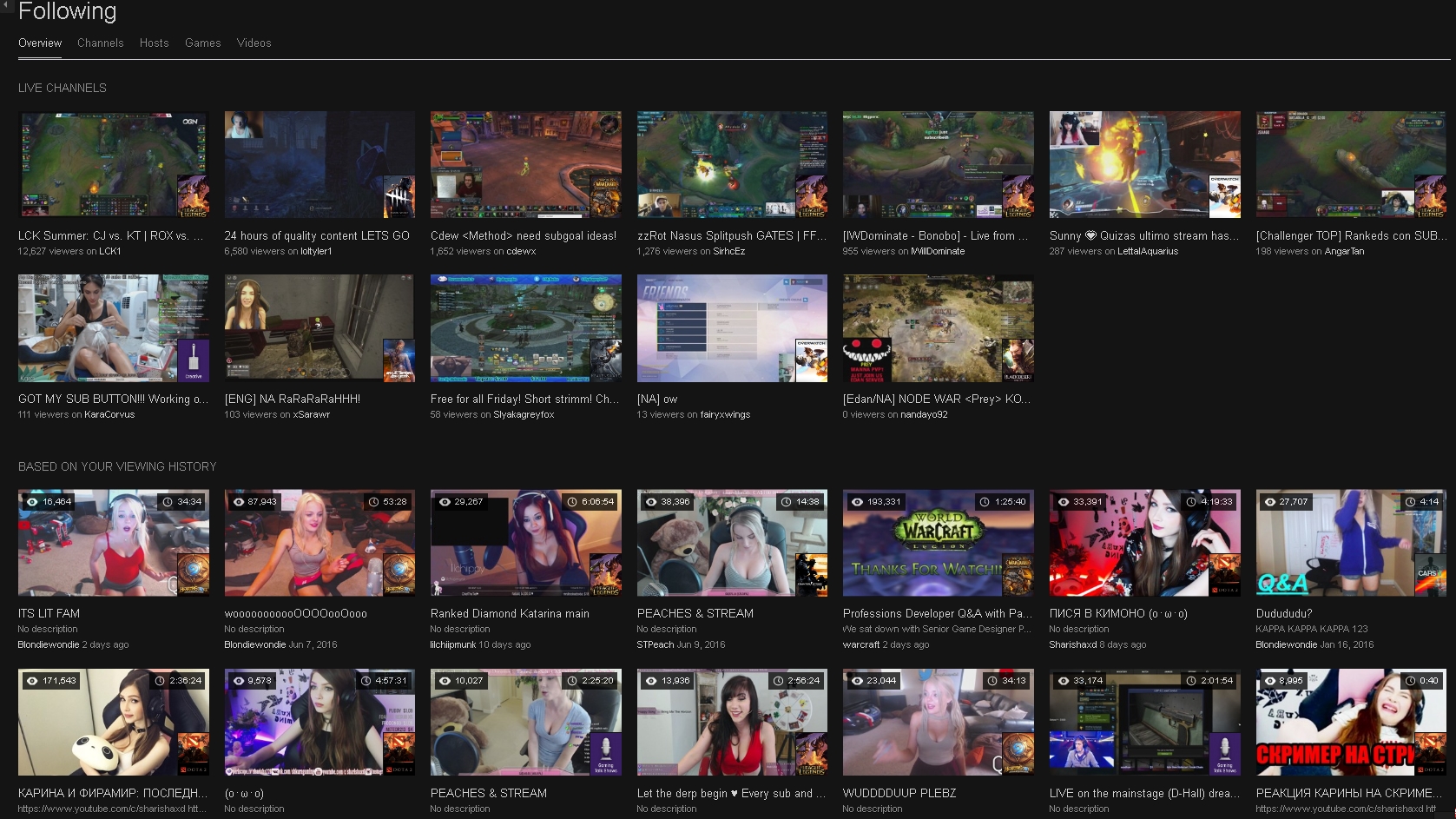 Here are some of the reddit threads that I've noticed over the last couple days:

I personally emailed twitch support about this 3 weeks ago back when it wasn't even as blatant as it is now, just a few random scantily clad female streamers doing arts and crafts and the occasionally anime streamer and even then I knew there was no way it was actually based on my actual viewing experience. Now it has gotten even worse. My email only got a reply telling me to email to a different feedback email address or to make a post on the Twitch User Voice forum. To my knowledge no actual response from Twitch exists regarding this.

I know Twitch makes money off of all streamers' subs and it's probably good for business to push a bunch of teenage boys towards these boob streamers in order to drive up sub numbers, but disguising this blatant marketing as a feature is some of the most transparent fuckery I've ever seen Twitch engage in and I'd be ashamed if I were them.


edit: Making some amendments to this thread to address some frequent, drive-by shitposts.

A. I dislike the term "boobstreamer" I only use it because it neatly encapsulates a very specific type of female streamer that highlights her sexuality and assets in order to garner a male following. (example of a boobstreamer). I am NOT condemning what these girls are doing. It's obviously viable for them to make a living and it's an empowering decision for them to do so. I compare it to exotic dancing, another occupation that attractive women partake in to make a living and it's their right to do so, but like exotic dancing I do not support it because I don't like the type of behavior it elicits in men. I think it fosters a toxic, misogynistic environment that I do NOT want to support or have it advertised to me, which is all this Twitch "feature" is doing, advertising streamers to me, and overwhelmingly "boobstreamers" are being pushed. I would have the same complaint if I saw multiple advertisements for a strip club during prime time television.

2. People who have clean "based on your viewing history" sections are claiming that I (and others, because there are many examples of this) have somehow "accidentally" clicked on said boobstreamers in the past and don't remember and that's how they are tainting our recommendations, and that is 100% not true in my case, and likely in the cases of many other people who have them inexplicably show up on their pages. Feel free to assume what you like, but just because your recommendations are working doesn't mean the system is fully working as intended.

d. There are a lot of theories in the thread about how these same boobstreamers keep popping up on multiple peoples' pages pages regardless of their actual viewing history and/or the level of their Twitch usage and the fact of the matter is nobody knows until Twitch says something about it. Some people don't even have this "based on your viewing history" feature yet. Some people still have the old feature "Most Recent Videos" which actually shows VODs and highlights from your actual followed and viewed channels and I'm envious of them. That feature used to be BELOW the hosted channels and followed games on my following overview page and I much preferred it to this new recommendation feature that placed itself directly below my followed channels, pushing the more useful content lower on the page.

edit2: For anybody that is experiencing this, or who wants the entire feature removed entirely, BrawlPurist has provided a uBlock filter to remove it.

Fixed that for you.

Does turbo remove this or something? I have never seen that.

Or maybe it's because I have tons of streams at any given time, which gets priority?
R

I can see this thread going places
T

Twitch was a mistake. It's nothing but trash.
I

ban all the butt emotes tho

It is based on your viewing history. Here's mine.

I have this bullshit too.

Never watched any stream like this before yet they are being promoted on my timeline. I only use twitch for fighting game streams and no idea why this nonsense is being pushed on my feed. It eventually refreshed to not have it some hours later.
K

Maybe the algorithm actually works based on your viewing history...
S

Ryan_MSF said:
I can see this thread going places
Click to expand...

It will go one place before it gets locked.
T

The only Twitch stream i follow is from Jeff Green. I demand Jeff to show his boobs or i'll stop watching.
L

Skux said:
It is based on your viewing history. Here's mine.

I have some Easy Allies streams in my recommends too and I've never watched any of their streams, clicked on their channel, and I actively dislike their content.
Click to expand...

I hate facecams anyway and pretty much only watch streamers who don't use them.
I

Qurupeke said:
Maybe the algorithm actually works based on your viewing history...
Click to expand...

better delete your cookies just to be safe
G

I Don't watch a lot of twitch, mine just has SuperBestFriends, Maximilian_Dood,EasyAllies and Seagull. So pretty much recommends me things from the few channels I watch.
N

Maybe it's what the algorithm recommends by default when there not much to parse from your viewing history?

Still pretty hypocritical of Twitch to promote their booby streamers to viewers despite their recent efforts to ban them.

I want to be upset.

But I can't be upset at boobs
S

What are you doing?
K

LiQuid! said:
I have some Easy Allies streams in my recommends too and I've never watched any of their streams, clicked on their channel, and I actively dislike their content.
Click to expand...

And who dislikes Easy Allies?
H

I noticed it too, and the only person I actively follow who you might call a "boob streamer" (although to be very clear I don't like this term at all) is Kaceytron.

I'm torn because I don't think a bunch of dudes should be policing what women should wear, and thanks to chat in VODs you can see every wonderful misogynistic comment in these streams (and there are a LOT of them). Nobody's forcing anyone to watch these streams but people seem really angry that women with breasts exist or something.

But the "based on your viewing history" is clearly extremely disingenuous.
S

No the way it works is every 15 minutes or so the thumbnail gets updated and twitch streamers know that so especially girl streamers have a timer and then go fullscreen.

I'd go out of my way to promote boobs as well

But a more serious post: Didn't twitch ban this behaviour? I recall reading something about it.

Twitch is all sorts of messed up. These women are the same women who get emotes of their O faces with the text being their name and "gasm" at the end and they get it approved no problem, yet others get denied for way less explicit stuff, like a pair of legs that aren't even sexual, or a cat in a litter box or some shit. It's effin backwards and I do believe they do it on purpose.


Caayn said:
I'd go out of my way to promote boobs as well

But a more serious post: Didn't twitch ban this behaviour? I recall reading something about it.
Click to expand...

Nah I think it was that you can't be shirtless, so it pretty much only effective guys.
S

What makes the most money on the Internet is not sex, spam or YesAsia. It's solitude. It's a real money-printer and it's not going away.

It's the perfect money-printer since Internet both provokes it and promises the solution - you can get a lot of friends without moving from your computer. The problem is the solution and vice-versa
J

It's still less obnoxious than the PewDiePies of the world.
H

Caayn said:
I'd go out of my way to promote boobs as well

But a more serious post: Didn't twitch ban this behaviour? I recall reading something about it.
Click to expand...

I don't get that at all. Half of it is SuperBestFriendsPlay and the other half is Overwatch. The only facecam in sight is in a SBFP E3 reaction stream.

There was a shaming thread a few weeks ago that was pretty ill advised. This is an equally poor decision. I'd prefer not to shame anyone who partakes in my hobby.
U

I don't even have the "viewing history" thing.

It just says "most recent videos".

Is this like Steam where you buy Final Fantasy and it thinks you want every VN?
M

I blame GAF. People linked that "Doll" streamer and since then I always have her in my recommended section. Contacted Twitch multiple times on it, but they are not even bothering to respond.

Seriously hate the "Based on your views" section. I want to see Highlights again, like in the old days. Give me a toggle on what to see there.
L

Zombine said:
There was a shaming thread a few weeks ago that was pretty ill advised. This is an equally poor decision. I'd prefer not to shame anyone who partakes in my hobby.
Click to expand...

I'm not shaming the girls. They're free to do whatever they like as long as it abides by Twitch's rules, but I think it's preposterous for Twitch to push this content on people with no way of blocking channels from appearing on it, or enabling some other way to customize the recommendations.

Even Youtube, which uses a similar recommendation system has a feature on there that lets you remove recommendations and tell Youtube why you aren't interested in that specific recommendation. Twitch needs this desperately.

Vital Tundra said:
Nah I think it was that you can't be shirtless, so it pretty much only effective guys.
Click to expand...

Thanks.
You must log in or register to reply here.

Oct 1, 2021 started SJRB
Oct 3, 2021
Fuz
2
Social News Cringe This Marine Otter channel is the second biggest Twitch channel in the Pool, Hot Tubs, and Beaches category. I wish it could be number one.

May 30, 2021 started ZlleH
May 30, 2021
TLZ
Opinion How something that could be just a brief fad turns into a global phenomenon? And can that status be maintained?