Just took this photo in the local shop. This message is in the UK tabloids this morning. 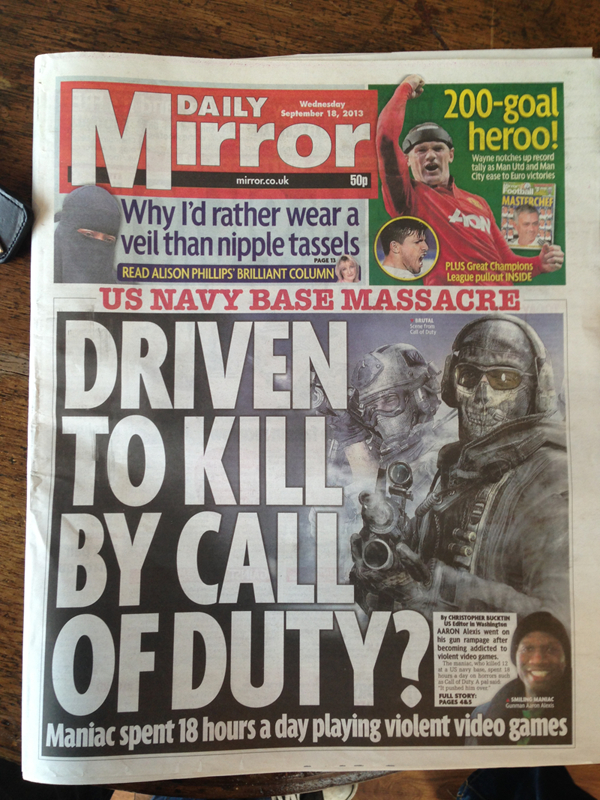 At least it's not GTA.
I

btw. is there any proof he did play 18 hours a day?

The top column says it all really.
J

itsgreen said:
btw. is there any proof he did play 18 hours a day?
Click to expand...

Fuck no. The majority of the British tabloids have fucking zero integrity. Its whatever they can sell/ram down peoples throats. Simple as.
O

Our tabloid press is blood hilarious at times really.
M

I personally think there's a case for libel, regardless of the question mark.
Y

Let's disregard the fact the guy was hearing voices in his head and was never treated for that.
M

itsgreen said:
btw. is there any proof he did play 18 hours a day?
Click to expand...

Is that even possible on a daily basis?
R

I'm so used to US newspapers/media using the most unflattering pictures of the criminal as possible that that picture of the dude smiling in the bottom corner completely caught me off guard.
O

mocoworm said:
Is that even possible on a daily basis?
Click to expand...

I do recall some friends playing WoW for insane amounts of time back in the day so perhaps.... unlikely but it is possible.
A

It's a shitty tabloid.

Was hoping it was the daily mail
T

ArjanN said:
It's a shitty tabloid.
Click to expand...

Unnecessary, in a literal sense.

If I was an Activision exec, I'd be thinking it was Lawyer Time.

This is just embarrassing on so many levels...
K

mocoworm said:
Is that even possible on a daily basis?
Click to expand...

Assuming he needed 1 hour for food and 1 hour shower/dressing, no not really.

4 hours sleep is going to get you down pretty quickly.
D

Because it's absolutely not because of America's lack of gun control.

And it's definitely not because of a lapse of Security at the Naval base.

And don't even think of blaming this on the fact he apparently already had mental issues to begin with.

This is just lazy journalism at its best.

The media scapegoating videogames is the easy way out. There's no individual you can blame, there's nothing that can be changed. It's an easy target to direct their pseudo-outrage towards for a day and then move on.


Would be refreshing if some of the media would look beyond someone's pasttime hobbies and take a gander at.. o I don't know, gun laws for example. Or mental health that was insufficiently addressed.
A

In other news, buyers of GTA5 saved a mans life while his house burned down....

I'm surprised that didn't make the Suns headlines but then again it doesn't scream sensationalism like this one does. BLAME THE GAMES!
P

RoboGeorgeForeman said:
I'm so used to US newspapers/media using the most unflattering pictures of the criminal as possible that that picture of the dude smiling in the bottom corner completely caught me off guard.
Click to expand...

Yeah, but then you take into account the words "Smiling Maniac" next to it...
D

Correlation does not imply causation.
S

These type of headlines really get me worked up.Forget the ease of having access to guns and possible mental illness, lets just blame it on computer games.
N

This time a stabbing and a robbery for a copy of GTA 5. This happened yesterday and is nearly a mile away from where I live in NW London.

I'm just glad I don't play COD. How you other MILLIONS of people that do, how do you resist the completely overwhelming urge to go out and kill?

Anyway back to FIFA, I'm gonna be playing for Madrid come January with Bale at this rate
D

Lol the Daily Mirror. Nothing to see here folks.
M

Basic rule of understanding journalism: If a tabloid newspaper headline ends with a question mark, the answer is 'no'.
M

The Bookerman said:
Was hoping it was the daily mail
Click to expand...

I glanced at the cover of yesterday's, and it had possibly the most Daily Mail feature headline I've seen in quite some time: "As Jemima Khan joins Brand's harem, what do women see in him?"
D

I'm more concerned about why that person would choose to wear a veil over nipple tassels.
P

LOL British papers. Anyone who take anything they say seriously is just as stupid as them.
T

Aaand we are done here.
M

ArjanN said:
It's a shitty tabloid.
Click to expand...

The Daily Mirror alone has an average daily circulation of 1,058,488 acc to Wikipedia. This is all over the others as well. It may be a shitty tabloid but it's readership along with the others makes up the majority of the newspapers sold in the UK.

This message being fed to so many ppl, many being working class families and parents, is crazy.
O

Dimefan3 said:
Because it's absolutely not because of America's lack of gun control.

And it's definitely not because of a lapse of Security at the Naval base.

And don't even think of blaming this on the fact he apparently already had mental issues to begin with.

This is just lazy journalism at its best.
Click to expand...

It's as if someone can learn to shoot for real just by playing video games because with a real gun you just aim with one thumb and shoot with the other. And, of course, you get a real gun with real ammo free with your copy of COD.

Yeah, it's a tabloid, but lots of people see this and many of them even believe the shit they read. That fact that he was mentally ill and had past offences will not be as big a factor now in their minds as the fact he played CoD.
A

are the newspapers in Walmart next to the ammo counter ?
T

The Bookerman said:
Was hoping it was the daily mail
Click to expand...

I was expecting the fail too. Variety is the spice of life...
A

-_- really? the british press are disgusting! turning a tragedy to their political agenda against video games!

The guy was in the Army and trained in real warefare, he probably laughed at Call of Duty's "realism"
not to mention;
* he had known anger problems he attributed to his time in New York during 9/11
* he had several incidents with gun violence in the past stemming back to 2006

this tells me he is already a trained killer with mental issues, the problem as i see it lies with how the hell he retained a firearms license NOT with his social habits.

Last night i played GTA5 then went out, during my trip out I DIDN'T; Kill prostitutes, run heists, steal cars etc

Lies. There is no limit.

Dog Problems said:
I'm more concerned about why that person would choose to wear a veil over nipple tassels.
Click to expand...

While wearing just nipple tassles would be more cooling, it doesn't protect against the sun as well as a veil does.
R

polychron said:
Yeah, but then you take into account the words "Smiling Maniac" next to it...
Click to expand...

But it's not even a crazy smile, dude just looks so happy. I started laughing as soon as I noticed him in the corner.

Edit: Guess it also helps that I didn't recognize the guy and thought it was just some unrelated story.
S

When we see this don't you think we give games reporters a little more shit than they deserve?
P

God, our tabloid press is awful. No wonder I ignore them.
B

Anything but hold a person responsible for their own actions, eh? -_-

Bold statement with a get-out question mark on the end. To be honest the media should be more regulated. These shouldn't even be considered 'news'. The only thing that separates them from crap like 'Heat' and 'OK' is the type of paper they are printed on.

[sarcasm]I bet there is a full editorial backed up by years of research (by credible sources) that lends weight to the headline. Oh wait.....[/sarcasm]
M

the stuff burlesque dancers would wear. like a tiny party hat with tassles. it apparently allows you to be modest(!) because you aren't completely showing your boobs. plus you can swing them in circles
You must log in or register to reply here.