Amiibos up for preorder 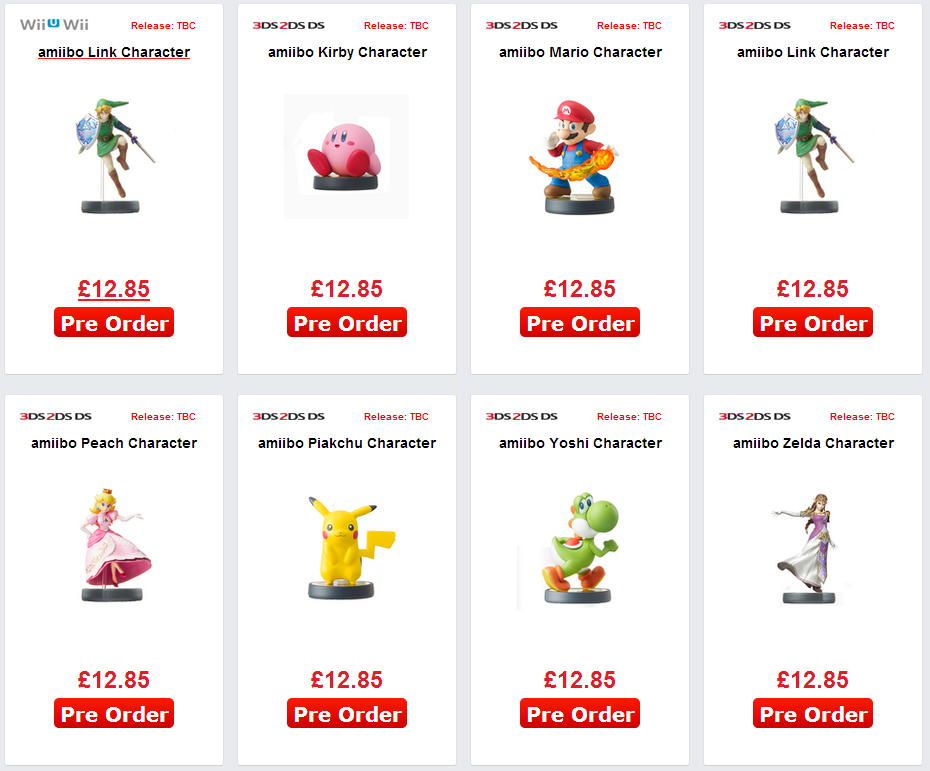 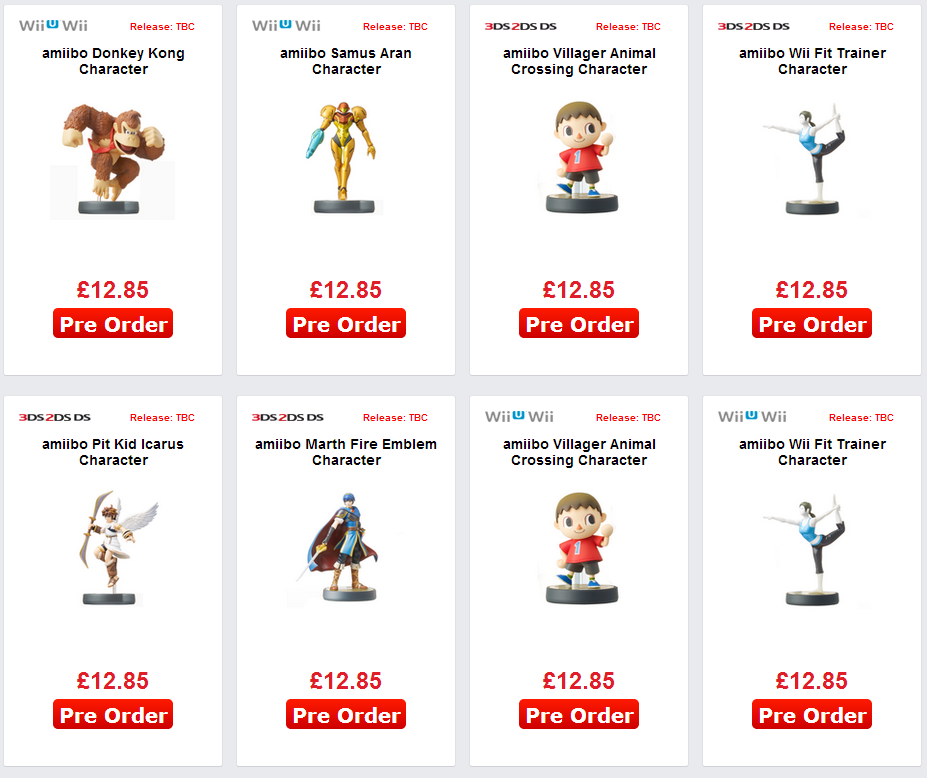 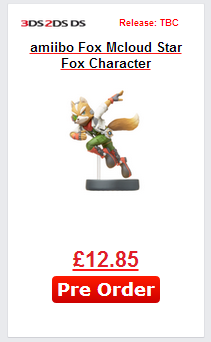 Hope Zelda is in the first wave.
M

Still going to suck my wallet dry, man I really need to get a job to pay for them.
J

guessing its a guesstimate? given prototypes 2 weeks ago and its 5 odd months out? whats shoptos history with price guessibg?

edit: in regards to price promise, surely its in their interest to ensure their guess is higher than itll actually be? (if they undercut, then itll cost them.)
G

Woah these are pretty expensive... that's something like 16 euros or 22 dollars

Are they gonna cost the same in retail? I guess the answer is yes but I just wanted to make sure it was

Edit: Alright, if that's only a guess then I'm cool with it. Because otherwise that's a steep price.
N

I think ShopTo is just guessing on the price. I don't think even Nintendo themselves know exactly how much the plan on charging.
E

Why is ShopTo banned? (Never heard of it before)
E

jeffers said:
guessing its a guesstimate? given prototypes 2 weeks ago and its 5 odd months out? whats shoptos history with price guessibg?
Click to expand...
Well they have a price promise thingy 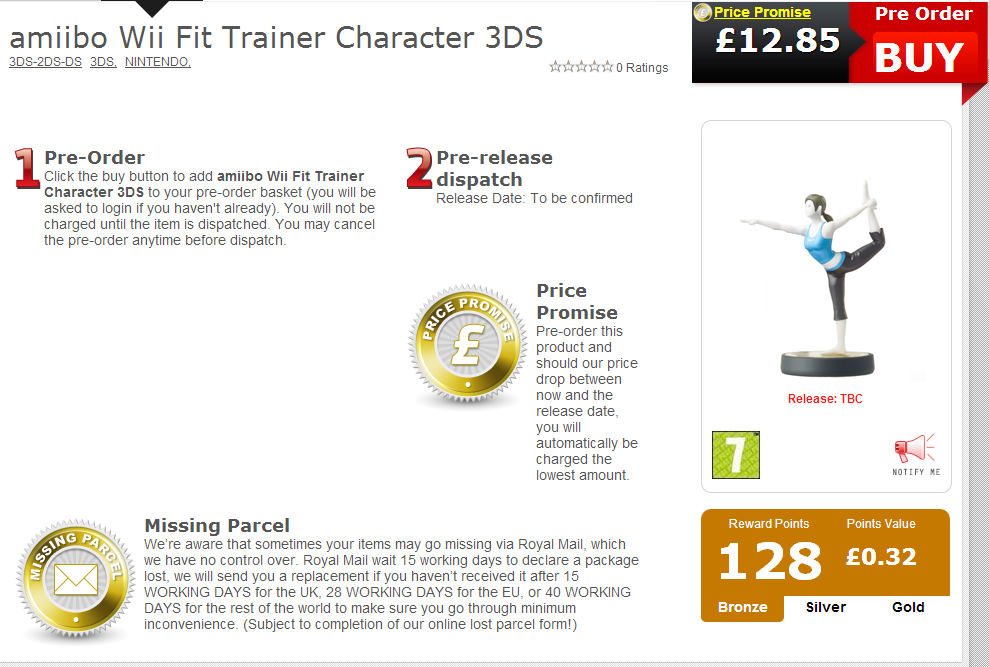 I guess this can be locked, does anyone know why they were banned?
C

I was about to rush to Amazon and preorder the entire set.

Good thing I got a raise.
A

I would hope that is just a conservative guess from ShopTo so they can get pre-orders up and running. If they are indeed planning to launch them at about £13 that puts Amiibo in the price range of the Swap Force Skylanders (regular and Lightcore Skylanders are about £8-9) which is far too much considering they don't have any extra gimmick.
M

Yeah, why are they banned?

When I live in the UK I ordered everything from them! Great service and usually cheap too.
S

Weird that the figurines seem to be listed twice: a 3DS version and a WiiU one.
A

Reason why ShopTo is banned:

Why will you not let me post links to ShopTo you twat. They have good deals too you know?
In 2008, ShopTo had some problems that led to some of their customer's credit card details leaking out. This was never proven, but some people, including some Gaffer's had credit card problems around the time of the supposed leak, and swear ShopTo were the cause  some of these people had credit cards ONLY used on that site. ShopTo quickly fixed the flaw, and allowed PayPal to be used to make things even safer, but it was too late, and the sites url got banned from NeoGAF. ShopTo deals are still posted at times, but without a link. It seems no one has had any big problems with the site recently, and ShopTo can now, more or less, be considered safe to buy from, you just have to navigate there yourself.
Click to expand...
http://www.neogaf.com/forum/showthread.php?t=504187
X

Mozz-eyes said:
Yeah, why are they banned?

When I live in the UK I ordered everything from them! Great service and usually cheap too.
Click to expand...
Pretty sure it's because they leaked credit card details and lied about it.

I use them all the time too, usually always get stuff early when pre-ordering.
P

mediocrity at its best

The figures look like kids meal giveaways. But I'll probably still buy a few....blah.
A

I'll buy them all and I'm not even into figures.

That's... a lot of money. I hope that is just a place holder or I'm not gonna buy any.
X

I'll preorder Fox, Kirby and Samus I guess, just in case the price goes higher. But it had better lower. =/

And I use ShopTo all the time. They're pretty spot on.

EDIT: Toon Link will be mine once that arrives. And hoping for the 3rd party characters too. Particularly Pac-Man! =D
G

jeffers said:
guessing its a guesstimate? given prototypes 2 weeks ago and its 5 odd months out? whats shoptos history with price guessibg?
Click to expand...
Even if their guestimates are wrong, they're know for having low day one prices, maybe not the lowest for every title, but far from what high street retailers charge. So I can see GAME charging £15 for the figures.

http://www.neogaf.com/forum/showthread.php?t=504187
Click to expand...
Regarding ShopTo, they might have had that problem years ago, but their actual service and reliability is ways better than other popular cheap like Zavvi and The Hut.

For the past 3 years or so, every single day one game, way over 60 I'd say, I've pre-ordered (aside from a few special LE deals from GAME or Amazon) has been from ShopTo since I believe they have the best delivery times for pre-orders and are also on the cheapest range across the board.
K

Samus is the slickest looking one of the bunch.

Will probably start with those two and maybe Link if the final version is more polished. Would rather have Toon Link or OOT Link though.
J

Ok so jist of what I meant was: Is this cost anything more than a guess? aka dont draw conclusions on price.
K

I aim to only buy one, but as they look so well made, it might end up tough to stick to that plan.
E

They really do look nice.

Why do the WFT and Villager occupy two slots each? I'm just taking a shot in the dark here, but are they maybe placeholders for their male/female counterparts? I know my sister would love to have a female villager amiibo.
F

edit: no wait did that wrong, and confusing it with canada
B

Guess I gotta collect them all.
D

Too expensive, I was expecting around £7.99 at most.

Are we going to be able to dupe the wiiu?
Z

I really want that Animal Crossing Villager one for the 3DS. Have they announced any 3DS compatible games for the amiibos?
H

MigueelDnd said:
Why do the WFT and Villager occupy two slots each? I'm just taking a shot in the dark here, but are they maybe placeholders for their male/female counterparts? I know my sister would love to have a female villager amiibo.
Click to expand...
I really hope so.

I want the male Wii Fit Trainer really bad, and I'd prefer the female Villager too.
C

Pelydr said:
The figures look like kids meal giveaways. But I'll probably still buy a few....blah.
Click to expand...
You didn't see the detail of the close-ups of them, did you?
M

Tortimer said:
I really want that Animal Crossing Villager one for the 3DS. Have they announced any 3DS compatible games for the amiibos?
Click to expand...
That's the one I want the most as well, curious to see how it interacts with other games. Zelda and Link would round out my top 3.
K

Pray I get a job tomorrow.

I'm in for that Paikchu!
C