Now Enhanced for Windows PC
Including a range of the downloadable content from the original console, plus the choice for either English or Japanese voiceovers, 60 frames-per-second graphics and customizeable rendering resolution (720p, 1080p, and more).
Click to expand...

Square-Enix has just uploaded the Steam trailer for Final Fantasy XIII-2. Looks like it's coming out on Dec. 11. 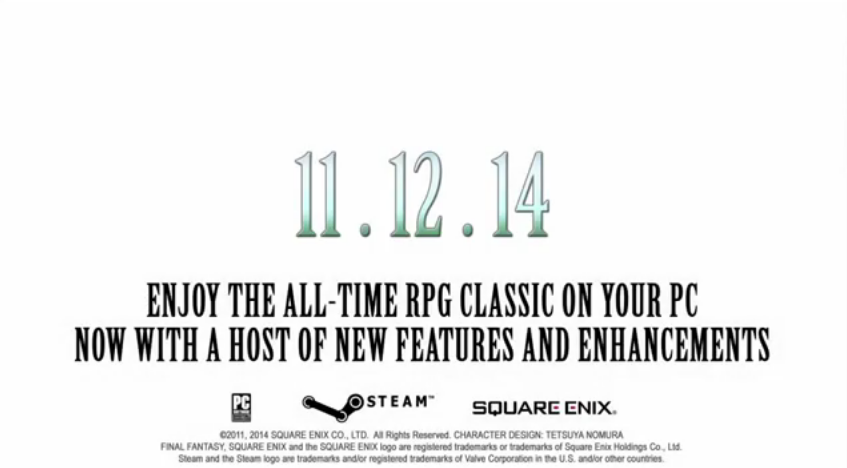 Not sure it's already been posted (and original PR doesn't mention the release date for this game).
G

Best game in the trilogy. Enjoy Caius, a villain that can get shit done!

GhostTrick said:
With new features and enhancement ?
Click to expand...
Oooh, I wonder what they are. Maybe all the DLC is included?
B

GhostTrick said:
With new features and enhancement ?
Incoming decent port ?
Click to expand...
I hope so, but I'm afraid we can't count on it. All they've managed to patch to XIII has been a popup to confirm exiting the game.
F

Was happy about hearing FFXIII coming to PC(and bought it), but this is the one I really want. Got it for PS3 but haven't played it yet.

Getting this Day 1.
L

Replaced the link in the OP with the UK trailer.
G

Didn't care for the nonsensical story, but this is great news.

Though I expect this one will be as bad a port as FFXIII was. Hopefully Lightning Returns PC isn't far away now.

Not buying it till FFXIII gets officially fixed. Do your job Square!
D

For a moment I read XII. Oh well.
R

Absolutely terrible and confusing "story" IMO, but at least the game is a somewhat open compared to XIII and the gameplay is top-notch. Will double dip.

Holding out this time, after the terrible port of the last one not just with res/options but performance, i just can't bring myself to be exited this time.
D

Durante, you're our only hope.
B

GhostTrick said:
With new features and enhancement ?
Incoming decent port ?
Click to expand...
I think they'll struggle to get anyone to believe them. This announcement really needs to be combined with a announcement that they're aware of the problems with the XIII port and will be releasing a patch to fix them (or if nothing else, at least the shocking performance issues).
J

Faster than I expected. Not expecting a great port but XIII-2 is a lot of fun, far more than XIII is.
A

XIII-1 is definitely optimized for the PS3, whereas XIII-2 and LR had much more even performance between the two consoles. If they're porting based on the 360 version, then the sequel ports may have better performance than the first game did.

All just wild speculation, though. Hoping for a solid port!
U

*outside of battles
G

Replaced the link in the OP with the UK trailer.
Click to expand...

That's what the picture says.
D

"Enjoy the all time classic RPG on your PC"

glaurung said:
Didn't care for the nonsensical story, but this is great news.

Though I expect this one will be as bad a port as FFXIII was. Hopefully Lightning Returns PC isn't far away now.

Click to expand...
Oh god that whole video, mocking us all for our nostalgia!
B

"All-time rpg classic on your pc"?

Didn't this game just come out like a couple years ago? Jesus.
K

Hoping for a better port this time.
Although considering how they never address those issues in the first game I'm not hopeful.

EDIT: If I remember correctly, I thought a SE rep on steam said that they would pass the PC port concerns over to HQ.
I guess since we didn't hear back from anyone at SE the response from SE Japan wasn't very hopeful.
B

Think I'll be holding onto my money this time.
K

Welp, I have about 12 hours in FFXIII and I think I still have a long way to go (first time playing it). I wonder if I can find some free time to finish it before the next one arrives...
C

DA FUCK ? Which circle holds XIII-2 as an all time RPG classic ?
N

GhostTrick said:
With new features and enhancement ?
Incoming decent port ?
Click to expand...
I certainly hope that is what is happening after seeing that message. I'll stick to my principles either way, and wait for them to officially fix up FFXIII first
F

Well at least it seems to imply DLC will be coming? I hope?
L

GhostTrick said:
That's what the picture says.
Click to expand...
No, I mean I don't know what the enhancements are.

"All-time rpg classic on your pc"?

Didn't this game just come out like a couple years ago? Jesus.
Click to expand...
Besides, I'm sure many people would disagree with that statement even if the game was 30 years old, ha ha.
J

GhostTrick said:
With new features and enhancement ?
Incoming decent port ?
Click to expand...
I wouldn't get my hopes up. Squeenix also promised that "Final Fantasy XIII has been optimised for PC, featuring full screen support and running at 60FPS". It's still right there on the Steam page.

They get the Japanese voices in like they did for FFXIII and I'm buying immediately.

Hoping they get in all DLC too, for free.
S

I'm waiting for a sale after they locked XIII to 720p.
F

Already sold my PS3 version but this needs to have all dlc included or else I'm out. Much better game than XIII and hopefully a better port as well.
K

The best FFXIII series game.
A

DA FUCK ? Which circle holds XIII-2 as an all time RPG classic ?
Click to expand...
I would certainly consider XIII-2 an all time RPG classic.
- It's my favorite entry of the trilogy
- I absolutely love time traveling
- The plot is entertaining
- The characters are great, especially Noel, Caius (best villain since Sephiroth) and Yeul
- Battle system is top notch despite the relative easiness of most battles
(only Caius battles were challenging for me, as I didn't grind at all)
- and finally: DAT OST
P

Will it be a shit port like XIII?
J

lol ok Sqaure. XIII-2 is pretty shitty. Much worse than XIII. Yep taking the things XIII did well and messing with them was a good idea.

I'd be interested just to see the game run better, but since XIII's port was crap I'm not holding out hope.
M

After the brouhahah that was 13, I don't think I can handle the disappointment of the inevitable terrible -2 port.
T

hard-mode mod pls. and colisseum dlcs, I don't want to buy them again

thats all I want
A

Might actually double dip on this. I really dislike XIII and Lighting Returns to no end, but I had tons of fun with XIII-2 even to the point where I ended up getting a Platinum on the PS3. That scene were you had to
find Noel in the future while getting his backstory explained was great. His theme fit perfectly!
L

After the first port, I will wait and see on this one.
X