Though this date doesn't appear to be accurate, there is new Metal Gear Solid V: The Phantom Pain information coming via Kojima Station at 6 AM EST on Christmas day!

There's a great chance we get a release date announcement during the show. A "special guest" will make an appearance, as well. 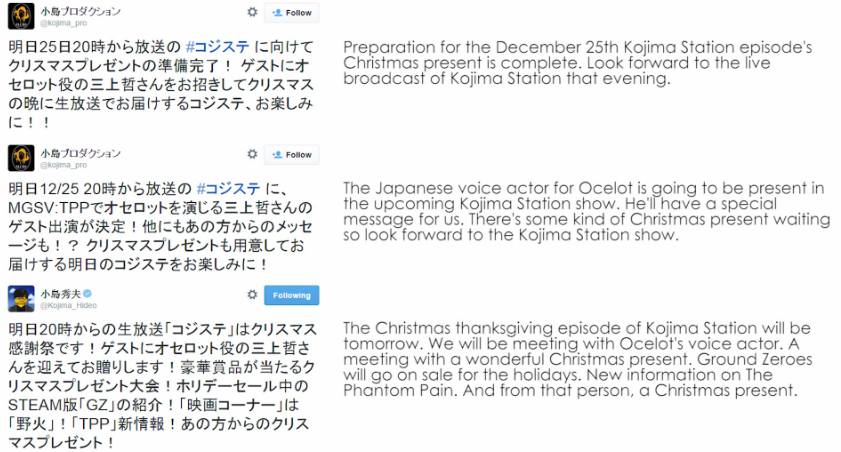 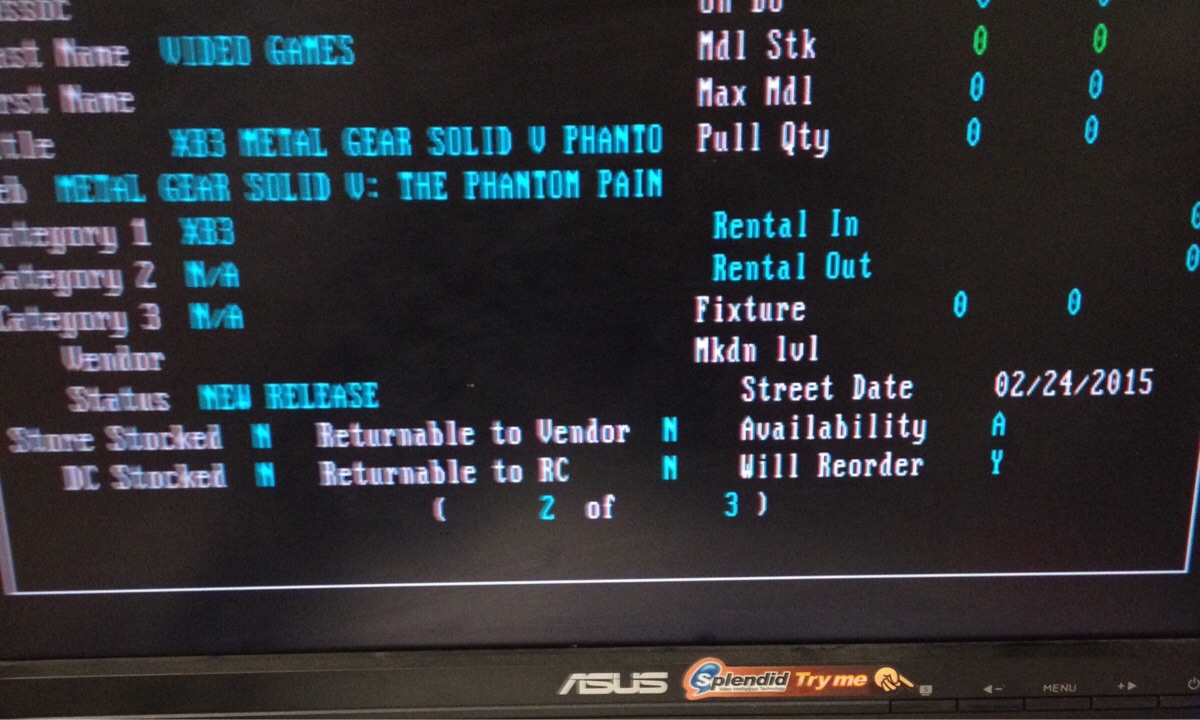 I work at a popular retail store as their inventory manager. I always check to see if the date changes periodically and it was always 12/31/2014. Today it switched and i think I cracked the code.
Click to expand...

That ain't no placeholder.

No. If it was out in February, they would have announced the release date well before now.
S

I imagine Konami would want more time for the hype machine.

I don't believe. It's too soon for my liking anyway. My body is not ready.
J

Savantcore said:
I imagine Konami would want more time for the hype machine.
Click to expand...

I am the hype machine. (Batman voice)
N

That would be a nice way to fill up the Bloodborne void. Was really looking forward to that February release.
E

Unless you're a smaller title, than you don't announce the date so soon before release.
T

Not even one chance. I just don't believe the preorder hype train would get rolling so late. When was the last time a release date was announced so close to release for any AAA game (excluding Nintendo's recent practices)?
D

I don't think it's gonna release in February.
A

I still think it's a placeholder, it's just odd whenever retailers don't use the end of a fiscal quarter as the placeholder.
N

That sounds way too early.
M

If that were the release date, surely they would have announced it already?
S

Tagg9 said:
No. If it was out in February, they would have announced the release date well before now.
Click to expand...

Rumors say they will announce the release date next week on December 25 on the new Kojima Station.
S

Yeah, there's no way it's releasing that soon without them having already announced the release date. I'm thinking probably a Q3/Q4 release. May would probably be the absolute earliest we'd get this but even that is highly unlikely.
M

Would have been announced already if it was that early. Not enough time for a build up.
T

I don't think it's Feb. that's wayyy too soon with them just releasing Ground Zeroes PC port this past week.
S

Sn4ke_911 said:
Rumors say they will announce the release date next week on December 25 on the new Kojima Station.
Click to expand...

I guess we will find out in 3 days then.
B

February? lol no way.
B

It was a reference to Herman Melville's 6th book Moby Dick. 22nd chapter's title is "Merry Christmas". Coincidence? NO.
M

Can't be this early.

JayEH said:
I am the hype machine. (Batman voice)
Click to expand...

If Konami knows what they're doing, they will put Ground Zeroes up on PS+ and Xbox Live Gold just before Phantom Pain comes out. That exposure.

I think there's probably more chance of that date meaning the 2nd of the 24th month of 2015 which would be Christmas 2016.
V

There's no way it's that early. At best it will be June, and if that they need to announce a date really soon.
G

They would have announced it earlier if this was the date. Kojima always plays his releases by the book, no nonsense.
S

what if the shirt was the troll all along
L

Sounds good to me. One month to enjoy MGSV and then it's time for Bloodporne.

It's one of the most anticipated games of the year, Konami aren't going to announce it so close to release like that. Keep dreaming.

Hamster Plugin said:
If Konami knows what they're doing, they will put Ground Zeroes up on PS+ and Xbox Live Gold just before Phantom Pain comes out. That exposure.
Click to expand...

Ground Zeros right now is one of the top paid games on XBL thanks to the sale.

I WISH I could play it in February.
J

Logistics of marketing and getting such a huge AAA game out there on the market so soon mean this is nigh on impossible.

BUT...BUT... lets say this were to happen. Lets play the worst version of Devil's Advocate.

I reckon this could be the In Rainbows of games launches. Not in terms of spectacle - Double Fine already did that with Broken Age - but in terms of a launch.

We knew Radiohead were working on a new album at the time, we just didn't know when (or what it was titled, but that bit is moot as we already know MGS5's subtitle). But then it announced In Rainbows and said it'd be out in ten days. A digital pay what you like version launched ten days later, with a CD version coming at the end of December 2007 (with a limited edition discbox for fans at the start of December).

IF - and it's a big IF - any publisher attempted this for a AAA game (lets say in this instance, Konami), they would have to give no later than a two-week notice (IMO).

But as I said, the logisitcs of marketing and getting game discs to retail means this'll never happen.

Unless... digital first, disc a month or two later ala In Rainbows?

I must have missed the "lack of marketing!" The game has had three half-hour presentations in the past six months alone, and has been showcased at every major event over the course of the past two years. #TeamBatzi
L

JP said:
I think there's probably more chance of that date meaning the 2nd of the 24th month of 2015 which would be Christmas 2016.
Click to expand...

Microsoft store has this date for it too: http://www.microsoftstore.com/store...Phantom-Pain-for-Xbox-One/productID.282497300 Perhaps that's where they work.
M

This seems more plausible than previous "leaked" release dates since it actually falls on a Tuesday unlike most of the others.
T

Sn4ke_911 said:
Rumors say they will announce the release date next week on December 25 on the new Kojima Station.
Click to expand...

Sure, but I said well before now. As in, they need to announce at least four months in advance for marketing purposes.
S

- VGAs 2012 phantom pain by 'moby dick studios' a Swedish company
- kojima having the Swedish words for the 22nd and the 6th on his t-shirt at the TGAs
- The 22nd chapter of Herman Melvilles 6th book 'Moby Dick' is called "Merry Christmas"
- perhaps rather than hinting a 22nd of June release date he is hinting that a release date could be given on Christmas Day. 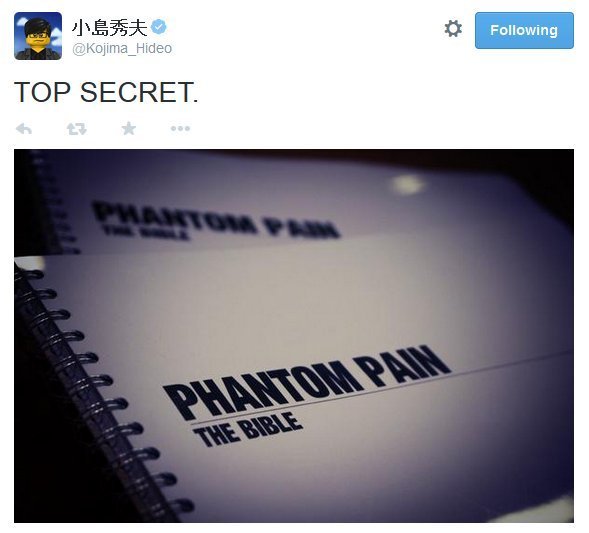 Kojima said at TGS the game is "nearing completion".