LordOfChaos said:
There's a 20W power supply reduction as well, unless this was debunked?

Though 20W is pretty tiny in the grand scheme of things, ~20W reductions have come with shrinks before...

So apparently a new PS4 model was listed on Amazon France for a few minutes/hours, according to Gameblog.fr. A screencap is included at the bottom of the article.

The model was called "big bang" and release date was marked for July 15.
N

DonMigs85 said:
The noise of any console or PC will also be amplified depending on the acoustics of the room itself and how close you are to the device. It'll seem much quieter in a big, open living room, but loud inside a small enclosed den or bathroom.
Click to expand...
That and people putting their consoles in cabinets with little to no ventilation. I can play on TLOUR and Witcher 3 for hours and never hear the PS4 making any noticeable noise.
K

NoWayOut said:
That and people putting their consoles in cabinets with little to no ventilation. I can play on TLOUR and Witcher 3 for hours and never hear the PS4 making any noticeable noise.
Click to expand...
Unless you're one of the really few people that has one of those and can prove it I doubt it. Been through four of them all of which were loud as fuck after ~15-20min of TLOUR, Shadow Fall, First Light, Ground Zeroes. They were all standing without any obstructions in terms of ventilation. Cool environment too and the room is quite big. Gave me a headache all four of them and I sit about 3m away from the television. So assuming or claiming that it's the ventilation being the issue is really tiresome. 50-60dB were common across all four of the units I had. One of which I replaced the thermal paste in which lowered the noise level with ~5-10dB. The temperatures are great, but the damn noise is the clear sign of Sony going cheap on the cooling solution side of things. They could and should have gone with an external PSU. Would have given it a lot more space to effectively cool it while keeping the noise levels down. The noise levels were measured with a real decibel meter just behind the exhaust to give an accurate representation of how loud the actual unit is. There are loads of people reporting the same issue with them being loud so there's an actual issue. Arguments like "it doesn't bother me" or "I dont think it's loud" aren't valid since that subjective opinions. Objectively it's really loud and for us that don't have bad hearing it's an issue.
M

So when is it coming?

MRORANGE said:
So when is it coming?
Click to expand...
Paris?
B

MRORANGE said:
So when is it coming?
Click to expand...
I honestly think this is something we'll see at the Paris event since Sony is skipping Gamescom. I think this will be the new $400 model and the 500gb will be either $300 or $350
D

I'm an audio engineer, and because of my trade, my hearing and attention to sound detail is probably higher than others. And yes, the PS4 fan bothers me, which is why I prefer to use some sort of headphone solution even though I have a 7.1 system (yes, I can hear the PS4 over it, at times). I, too, do not believe that there are truly "whisper quiet" systems in the wild, as hearing is a really subjective thing. Sony could have done a better job in this regard.

Instead of a "PS4 Slim", I would actually really like a bigger PS4, with a bigger fan. I have the infamous "trashcan" Mac Pro re-design, and even though it has two workstation-grade AMD GPUs and a 6-core processor inside of it, it's the quietest and most pleasant system I've ever worked on, thanks to the design and the cooling solution Apple employed.
3

RexNovis said:
Wonder if this means the 500gb model will see a substantial price drop.
Click to expand...

Yeah weird there was no announcement at e3. Wonder if this is an or right replacement for the 500gb model and they are trying to draw down as much inventory at full price before introduction.
R

It may not be a remodel. Every PS had what, 5 or so hardware adjustment? But only three or so cosmetic changes.
I'd love to see what the hardware designer does with a cosmetic revision, though. Maybe another couple of years for one?
F

I already have a 1tb SSD in mine so im good, but if they drop the BD drive i might trade up. Havent put a disc in my PS4 yet.

raziel said:
What was 8 years?
Click to expand...
The time it took to create that PS2 slim. Not really a huge technological achievement if you're aware of Moore's Law.
D

I will gladly buy a PS4 slim with increased power efficienty. Bring it on, Sony
S

Not sure if its the same model but look at this

New model was announced in Japan and it will be on sale from the end of June.
http://www.jp.playstation.com/info/release/nr_20150622_ps4.html

It says 8% better power efficiency and 10% lighter.
The price is the same though. Also the drive bay isn't glossy.

Edited: Looks like someone made a thread for it.
http://www.neogaf.com/forum/showthread.php?t=1068368
P

Macrotus said:
Not sure if its the same model but look at this

New model was announced in Japan and it will be on sale from the end of June.
http://www.jp.playstation.com/info/release/nr_20150622_ps4.html

It says 8% better power efficiency and 10% lighter.
The price is the same though. Also the drive bay isn't glossy.

Edited: Looks like someone made a thread for it.
http://www.neogaf.com/forum/showthread.php?t=1068368
Click to expand...
I don't think it's the same one, the 1TB model is still glossy, release 15:th of July 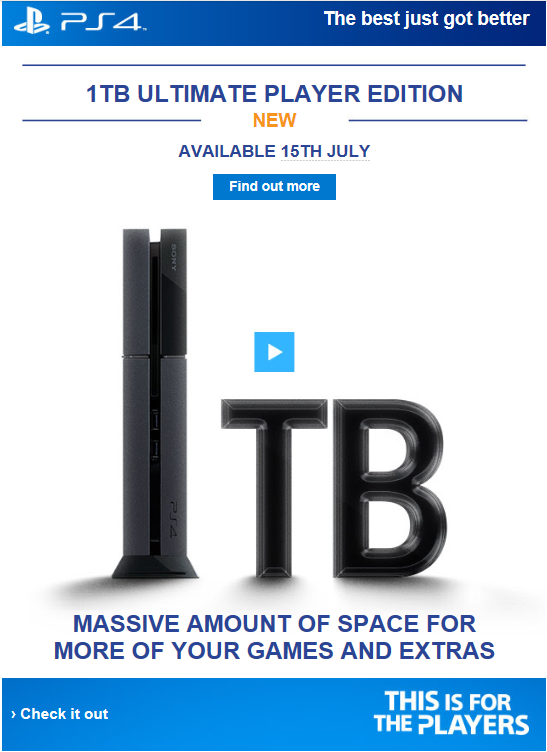