Older Wii U Bundles, Including All Black Systems, Discontinued in Japan 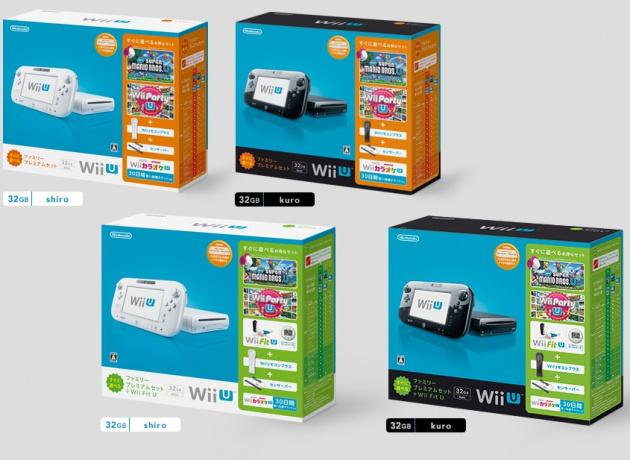 Intriguingly, it seems that Nintendo is going so far as the discontinue a series of bundles, some relatively recent, including all black models. Once these systems are sold out in Japan, they'll be gone forever.

Listed as discontinued on Nintendo Japan's hardware page are the original launch models, family bundles that include Wii Party U and New Super Mario Bros. U, along with Dragon Quest X and Monster Hunter 3G: HD Version bundles. The latter two being discontinued is arguably unsurprising due to them being third-party specials, though the removal of the family options is interesting. The options being actively promoted on the hardware page are Wii Sports Club offers or the core standalone system.

From a manufacturing and logistical perspective, and no doubt taking into account consumer preferences and buying habits in different regions, it makes sense for Nintendo to prioritise white models in Japan and the black equivalents in the West. Reader HCK, who got in touch to tip us off on this, states that the black models are very hard  almost impossible  to find at retailers in Japan. A look at Amazon Japan does show standard white models easily available, while black systems are typically out of stock or in very low numbers from third-party distributors.
Click to expand...

Discontinue the White 32 GB version of this thread if old.
E

Yeah, it's a shame we didn't get a 32GB White in the US. The white gamepads on display at kiosks are gorgeous.

I always assumed when it came to these bundles or limited editions one was made at a time and when the next one came along they stopped making the old one. So in that sense the Wii Sports Resort is replacing the others.

No black on the market at all now is a surprise though. I do want to see an 8GB Black system just to maxamise confusion though.


WillyFive said:
Yeah, it's a shame we didn't get a 32GB White in the US. The white gamepads on display at kiosks are gorgeous.
Click to expand...

The kiosks are also 32GB.
T

not like this.
new model and my Wii U only have 1 month :/
V

Did you miss where Iwata said he's doubling down on the Gamepad?

Remodel will happen, gamepad-less not so much.
M

so wich boundles are they still selling there? just mk8?
V

A real shame about the black model. That should have been the only model.

White makes it look too similar to the Wii.
E

I prefer black, it matches my ps3! But seriously black matches nearly everything else including my TV. So they have white tv's in Japan?
L

Vashetti said:
Did you miss where Iwata said he's doubling down on the Gamepad?

While the gamepad is definitely staying, I still find it funny how people still believe in everything Nintendo say considering they change their minds all the time. Remember when Miyamoto said that the DSi rumours were false and then a few days later it got announced?
S

Doubting new console too early (probably next year though). Most likely a revision like the 3DSXL. gamepad-less SKU will be interesting if they go with it and just have a pro controller as there main controller.
V

Maybe relaunch with a new SKU and new models, trying to reduce the costs as much as possible? I can't see them drop the gamepad, but maybe they have redesigned it?
1

New Wii U bundle most likely for japan.
S

LonelyGreyWolf said:
While the gamepad is definitely staying, I still find it funny how people still believe in everything Nintendo say considering they change their minds all the time. Remember when Miyamoto said that the DSi rumours were false and then a few days later it got announced?
Click to expand...

It's obvious they were being serious about keeping the gamepad though, they've already confirmed all the NFC things coming in the future.
C

LonelyGreyWolf said:
Remodel will happen, gamepad-less not so much.
Click to expand...

Hopefully a big enough departure so people can easily differentiate between the Wii and WiiU.
P

I bought the Wii U Mario Kart 8 Pack a couple of days ago and I'm no fan of the Gamepad. I'm hoping for a Gamepad free version because I will buy another Wii U soon for my summer house.

WillyFive said:
Yeah, it's a shame we didn't get a 32GB White in the US. The white gamepads on display at kiosks are gorgeous.
Click to expand...

There was a white version of the Premium model? Not that I care about the colour but at least it would have got rid of the fingerprints. I'd actually pay for a white Wii U replacement shell from Nintendo if they were available and not too risky to swap.
You must log in or register to reply here.

The Wii U Is Getting Two New Physical Releases This Year