Lock if old. Although most people are still watching Spartan:

Sony will launch a PlayStation 4 & Vita ultimate bundle before Christmas in Europe.

It will be backed by a £2.5 million The Best Way to Play advertising campaign for the Vita that will highlight the ability to stream PS4 games to the handheld system.

Speaking to MCV, Ben Law the Senior Product Manager at SCEE said Were really excited for Vita as we move into Christmas. Weve got a great campaign with key messaging around new releases like Tearaway, the ever-growing game catalogue and the Remote Play service.

Sales of the Vita have been steady but not spectacular. As more gamers become aware of the benefits of playing next-gen PS4 games on it then it could give the device a massive sales boost.

SCEA have not made any announcements but if the bundle takes of then it could be also be made available to North America.
Click to expand...
http://www.handytips.info/1861/ps4-vita-ultimate-bundle-confirmed-for-europe/

EDIT: Some people are having trouble with that link so here's the original:

Tearaway and Remote play are too good to pass up.

Might give some momentum to the Vita, I can't imagine many people picking up the bundle over just the PS4 though unless the bundle is sold at a hefty discount.
J

The site doesn't load for me. Any details? Price?
K

Silly announcing this now without a price.
J 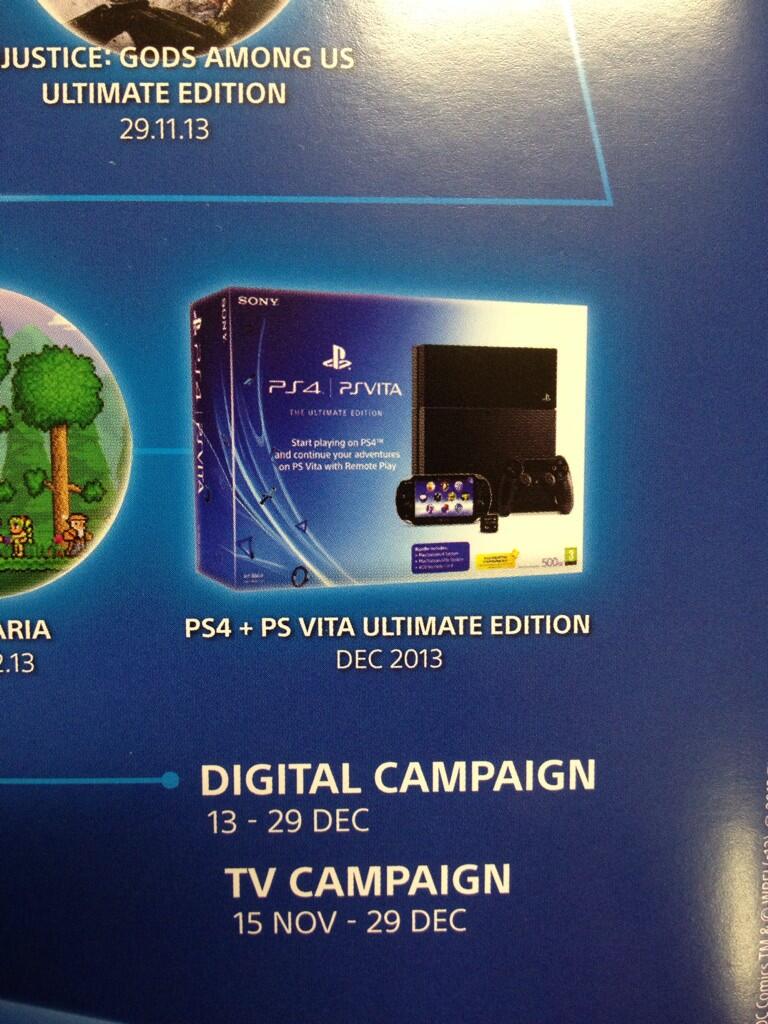 my ps4 is arriving in Dec. I'll be happy to cancel it if I can get this bundle for about 100 euros more.
B

The Bundle to End All Bundles.
B

Awww yes, the perfect way for people to welcomed to the best handheld gaming device ever created.
T

Awesome! Nice to hear about the ad campaign too. This will be a great next-gen bundle.

Tearaway and Remote play are too good to pass up.
Click to expand...
Vita for 100? Not going to happen for a long time.
D

Sales of the Vita have been steady but not spectacular.
Click to expand...
lol

I hope it's a success anyway
K

This is the most obvious thing for Sony to do. I have used Remote Play 10 times already since Tuesday and it is so freakin good it is ridiculous. Almost got one of my top scores in Res0gun via Remote Play actually lol.

Impeccable said:
Awww yes, the perfect way for people to welcomed to the best handheld gaming device ever created.
Click to expand...
What have you done..
C

Nice. I may even buy it next year if it's not too expensive.

Edit: Now that I think of it, I wouldn't know what to do with a Vita. I'll pass.
T

I want this bundle

Very smart move.
Glad this seems to be confirmed since the original picture is a terrible photoshop.
Thought it was fake at first.

Bomber Bob said:
449e ps4 + vita would be sooo gooood
Click to expand...
I think that would be expecting a bit too much.
499 seems to be an obvious price.

I won't have need for this but great news for the Vita. I'm expecting 550 but 500 would be killer.
A

Was always coming. Great package, if they can make this £430 the same as an Xbox One then really they should have Christmas all sewn up.
D

The Wii Sports of PS4!

Well, I hope it helps with Vita sales to some extent at least.
B

JehutyRunner said:
Link
Click to expand...
I think the bigger news here is that Terraria Vita is being released soon
I

I'm still delaying my PS4 purchase until Destiny is closer on the horizon.

Its a better deal than crappy game pack ins although redundant unless you're going digital. They need to actually advertise Remote Play and actually get the point of it across though otherwise it wont sell.
M

The price needs to be very attractive for this to take off.
C

I need to know the price and whether it's the OLED Vita. Very interested.
J

I wonder if we'll see the return of 599 US dollars when it comes here.

Zalman said:
I need to know the price and whether it's the OLED Vita. Very interested.
Click to expand...
I doubt it would be. Isn't the 2000 replacing the 1000?
T

Given my built up PS+ library this is certainly interesting. Hard to see it being cheaper than the good Vita deals starting to happen...but we'll see.
A

I'm glad more people will have a chance to play on the Vita, even if it's not the primary reason for the purchase.

Impeccable said:
Awww yes, the perfect way for people to welcomed to the best handheld gaming device ever created.
Click to expand...
I love the Vita and I think it had one of the best launch line-ups in history (which exemplified how unimportant that is compared to having a steady stream of good games) but let's not go nuts

Can't read the links at work, does it come with the redesigned Vita or are Sony still trying to get rid of old Vita stock?
B

If the price is right, I'll come on down!

Ovek said:
Can't read the links at work, does it come with the redesigned Vita or are Sony still trying to get rid of old Vita stock?
Click to expand...
If the pic in the OP is anything to go by, this is the OLED Vita, not the new model.
Z