The familiar platforming hero Rayman makes the jump to smartphone and tablet gaming with this release. It uses the same UbiArt framework engine that was used to create the beautiful sidescroller Rayman Origins for the consoles last year. You run sideways and jump like crazy, unlocking powers and discovering cool worlds and hidden surprises. The game uses touch controls and enables you to unlock wallpapers. It supports cloud saves on iOS and Game Center leaderboards. 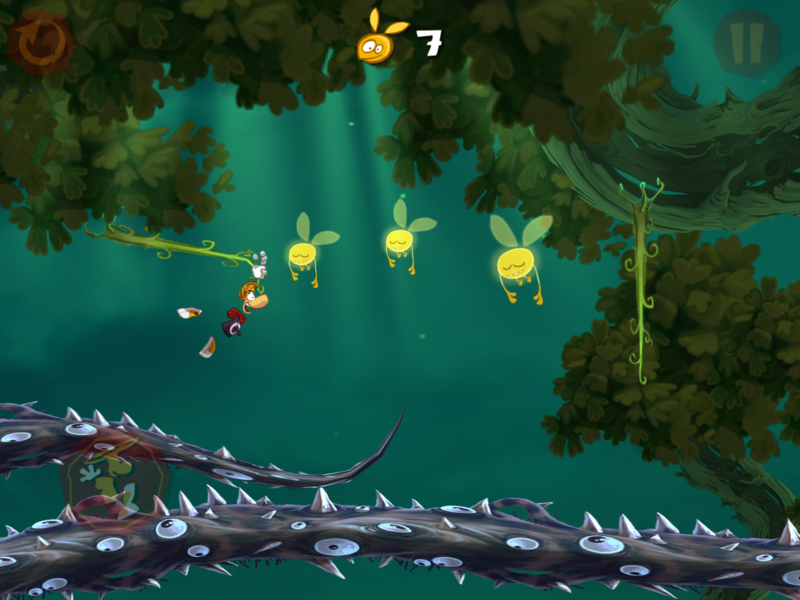 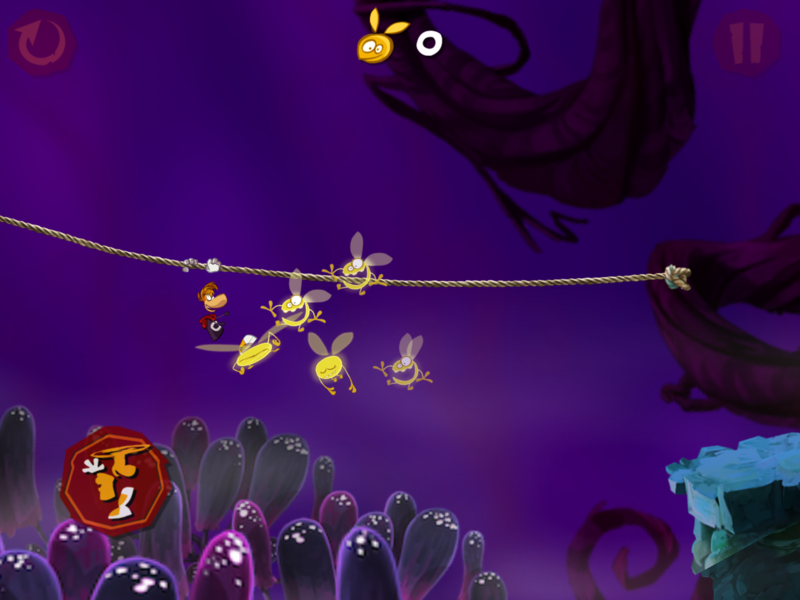 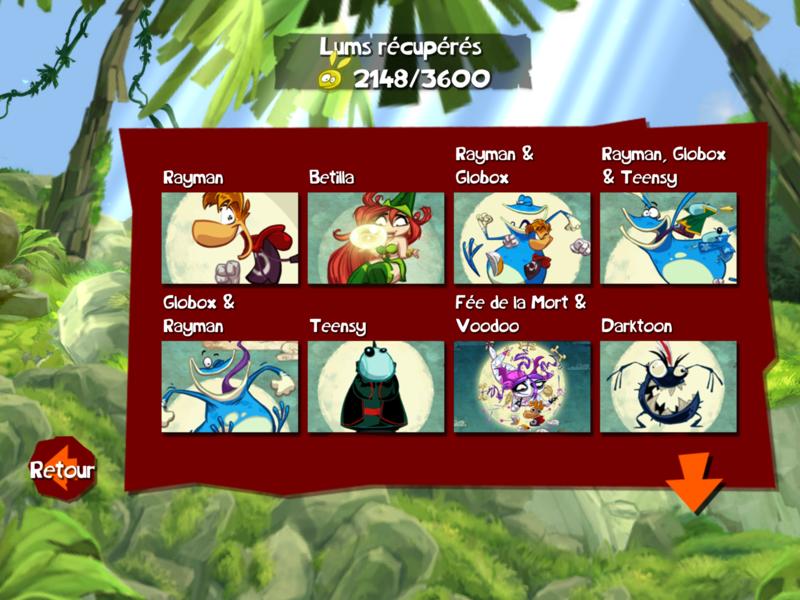 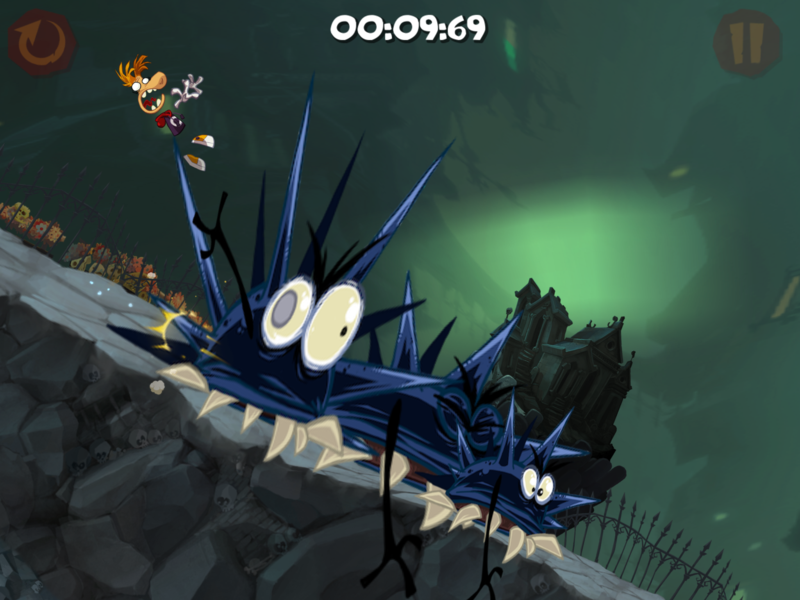 Rayman Jungle Run starts off with Rayman running automatically through jungle scenes, collecting glowing fireflies called lums. Thankfully, Rayman Jungle Run is not another Temple Run knock-off, like we were expecting at first. The goal is to reach the end of each level without dying, instead of running forever and racking up a high score.
As you run, you'll have to time your jumps perfectly to avoid falling off a cliff or into a bed of spikes. The game is divided into four chapters with ten levels, each of which introduces a new gameplay element: Jump, Fly, Wall Run, and Punch.

After you learn how to run and jump, you'll be able to fly. You fly by holding down on the screen, which causes Rayman's propeller-head to vault you upwards for a short period of time. You can follow the path of lums to find the most efficient route through each level. Later, you'll be able to bounce off of walls and punch through obstacles or enemies.

The graphics and audio are both very bright and chipper, which made Rayman's repeated deaths feel a little less frustrating. The levels will often change as you run through them, with twisting vines or flowing lava cutting off different routes. With enough skill, you can perform a perfect run and earn three gems, which are tallied along with your lums in a stylish spiral at the end of each level.
Click to expand... 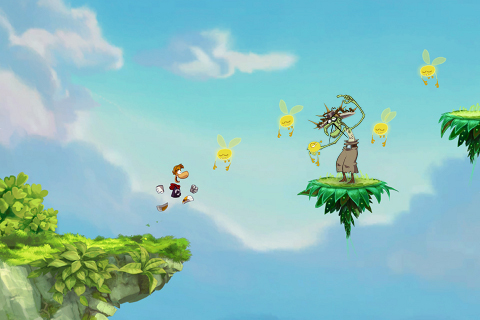 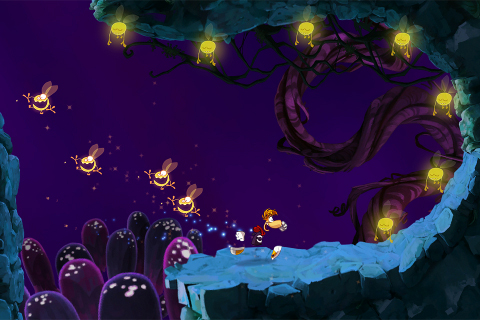 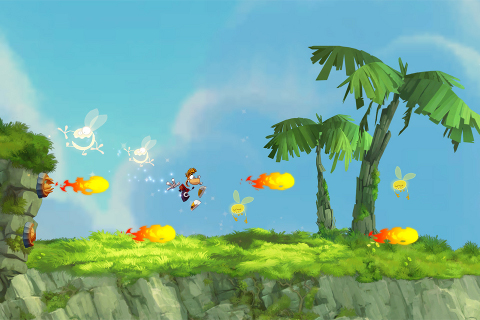 So bought. Loved the cannon sequences in NSMB2.
S

I thought I'd had my fill of endless runners but that looks gorgeous. Hopefully they'll take some tips from Mirrors Edge because that managed to be a little deeper than the average endless runner, without stumbling into any control issues.

Nice! Another limited and shorter counterpart of a console game on iOS! On fire, indeed!
J

Niiiiice! Now if we could have a remake of the first rayman... Maybe I'll be able to win it this time.
M

Cool that this is a thing, but I don't really care for runners.
K

I could totally dig it if the only touch control was to press jump/hover at the right time. Probably not so much if I have to run as well.
S

"Here is a license that you know and love but in a streamlined format better suited to a mobile device!"

Look at it that way. Last I checked, Rayman Origins is still available for Vita. I strongly recommend it.
R

This will look so good on my retina iPad. It'll probably control like shit though. Not really port begging, but I hope this makes it into xbl/psn/eshop/whatever.
J

So it's basically a succession of chest runs from Origins? Sounds like a really good fit, especially on iPad.
C

Ha, I was thinking of Maestro Jump in Music when I saw the pics and read the description and sure enough, it's Pastagames.
Excellent!
M

Jay-B said:
So it's basically a succession of chest runs from Origins? Sounds like a really good fit, especially on iPad.
Click to expand...

dallow_bg said:
Ha, I was thinking of Maestro Jump in Music when I saw the pics and read the description and sure enough, it's Pastagames.
Excellent!
Click to expand...

its been a great month for ios gaming.
W

Katzii said:
I could totally dig it if the only touch control was to press jump/hover at the right time. Probably not so much if I have to run as well.
Click to expand...

"A trailer for Ubisoft's upcoming iOS game, Rayman Jungle Run. Rayman runs automatically through each level, collecting lums, while you control the jumping, flying, and punching. Coming to the App Store on Sept 20. Check www.slidetoplay.com for our hands-on preview."


Only 2 weeks to wait! that's what I like with iOS, you don't have to wait very long to get the games that are announced, sometimes they're even just out of the blue
P

I love how Wario tried his typical Kotaku-shit to trick people into clicking his thread, and... people liked it p

It sounds like a game that slowly builds up from just running to almost the 'regular' Rayman Origins, but we'll have to wait and see how it plays. *Hugs the Vita version*
C

Hope they have actual chest chases in the game
M

Awesome, was in dire need for a new good iPad game

I feel dizzy from all the eye rolling.
E

Shit looks hot. Insta-buy at 99 cents (if we all say 99 cents it will happen, that's how iOS stuff works FYI).
N

"Jungle Run" made me suspect an autorunner for iOS, and, well, I was right, but it actually looks good. If this is level based instead of an endless runner it's a buy, otherwise I'm not touching it.

The goal is to reach the end of each level without dying, instead of running forever and racking up a high score.
Click to expand...

Will look sexy on my 4S retina
D

This could be pretty cool, Origins was at its best when you were constantly running forward and reacting to stuff on the fly anyway, so potentially the only difference in this version would be that you don't have to keep the analog stick pressed right.

It's too bad it won't have the exploration aspect of collecting enough Lums to get gold medals, but it could end up being a pretty faithful interpretation of Origins' gameplay. Assuming it's $5 I'll be grabbing it as soon as it's available.
J

Awesome. It's like my favourite part of Rayman Legends simplified. Will pick this up day 1 for Android.
T

actually smartphones are on fire, much popular than 3DS and Vita; so don't be surprised to see so many announces related to iOS and Android games instead of 3DS and Vita...

Hey this seems nice! And from Pastagames :O (developers of Maestro , Arkeodo Series 03: Pixel! and Pix'n'Love Rush). Very very promising, especially when it's a real quality developer on the project.
T

actually smartphones are on fire, much popular than 3DS and Vita; so don't be surprised to see so many announces related to iOS and Android games instead of 3DS and Vita...

So you're telling me phones, that do lots more than handhelds and lots of people need to communicate, are selling much more than a handheld? Color me surprised!!!


On a serious note, I love the Android support. Will buy the game when it comes out.
M

But seriously. It looks very good on first sight, so I'll be sure to pick it up unless they charge 30 for it or something.
E

Hmm. This might be the first time I actually look forward to trying a smartphone game.
S

For those that want the full version, it's on pretty much anything, including the PC you might be typing on, so grab that if the mobile version is so offensive.
G