Switch as a fashion accessory: Nintendo to showcase Switch at Milan Design Week

The Announcement in Italian

Nintendo at Fuorisalone 2017 with the new Nintendo console Switch

Nintendo will be present at Fuorisalone 2017 with Nintendo Switch , a revolutionary home console that not only connects to your home TV, but it also turns into a portable gaming system thanks to its 6.2-inch screen. For the first time, players can enjoy an experience full home console at any time and wherever they are.

With its different mode of use, Nintendo Switch Fuorisalone will allow guests to live an unforgettable gaming experience.

At Nintendo Switch Showcase , April 4 to 9 in via Tortona 12 , will be available to try out a number of new features and previews: The Legend of Zelda: Breath of the Wild , one of the best titles in gaming history according to the public and criticism, 1-2-Switch , which uses creatively many of the new console features to make the most vibrant festivals, anywhere and at any time, ARMS , a novelty among the fighting games multiplayer, Mario Kart 8 Deluxe , the final version of a favorite Mario titles, Splatoon 2 , where the traditional blends mollusche 4 on 4 make their return with new levels, new fashions and new weapons, Snipperclips - Let's cut! , A new kind of action puzzle game in which players communicate, cooperate and use their imagination to solve puzzles, and many others.

Nintendo Switch: where, when and with whom you want.

Tortona Design Week: find out more
Click to expand...
What is Fuorisalone?

Fuorisalone is the most important event in the world related to the topic of design. The term is used to define the events and exhibitions that animate the entire city of Milan during the weeklong Salone del Mobile happening in April.

The Salone del Mobile and Fuorisalone define Milans Design Week, premiering the latest trends for the forthcoming year and heralding a tidal wave of events, exhibitions and presentations. During the Fuorisalone, many locations usually feature longer opening hours, like the Crypt of San Sepolcro, that in occasion of Fuorisalone 2016 was open until 9pm. Moreover, during Milan Design Week many important brands located in the design districts introduce their new collections and host special events with live music and entertainment for a totally unmissable extravaganza.
Click to expand...
GQ article about Joe Jonas carrying a Switch as a fashion item:

Last night, as much of the East Coast dug itself out of a dreary blizzard, Joe Jonas channeled the bright California sunshine in a velvet bomber jacket that just so happened to be bright-ass yellow. In his hand, he held a Nintendo Switch, the other biggest trend of 2017 (we'll get back to bringing video games to a restaurant later).
Click to expand... 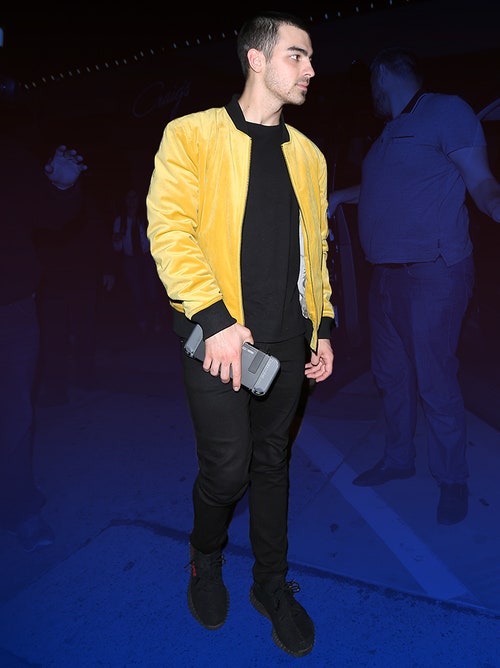 I was kinda hoping for some fashionable Switch cases so I know how to carry it around.
M

Lightning better watch out, she aint the only one hitting up the catwalk
D

I mean it's a pretty Nintendo device but it's far from a fashionable consumer electronics device.
A

RRockman said:
Lightning better watch out, she aint the only one hitting up the catwalk
Click to expand...
Shit, someone Photoshop modelling Lightning with a Switch.
K

Neon Joycons would have went well with the yellow jacket... #fashionfail
G

Wide leg jeans are coming back in style just in time.
U

So the switch itself is an overpriced acessory, hah hah hah.
?

GQ said:
Lastly, a note about combining one's love of fashion, love of dining out, and love of video games. Though there's nothing wrong with what Joe Jonas is doing in this photo, we would not look favorably on any man (no matter how stylish) who plays Zelda at the dinner table. Unless, of course, he's alone at home, in which case, carry on, nerds.
Click to expand...

Azuardo said:
Shit, someone Photoshop modelling Lightning with a Switch.
Click to expand...

I'd wear a Switch belt
M

Click to expand...
what kind of global icon? nintendo can thank her for what little sales the gamecube did get.

this is power, honestly. love her
W

just a reminder that design does not equal fashion.

Some fashion product has bad design and vice versa.
S

let's ask JJ what's harder to find right now: pair of yeezys or a switch?
A

TangoAlphaLima said:
GQ throwin' shade.
Click to expand...
oh i get it, geek people are forever alones hahaah you got us GQ!
D

All Nintendo needs is something like this to take off and it's a wrap.
G

It's really fucking wide in his hand. Might as well pocket a joycon or two and hold it normally.

Then again, it would look like a normal tablet.
W

Says the unattractive middle aged b.....
Click to expand...
Yeah, don't do this. Not a good look, my dude.
G

phanphare said:
I'd wear a Switch belt
Click to expand... 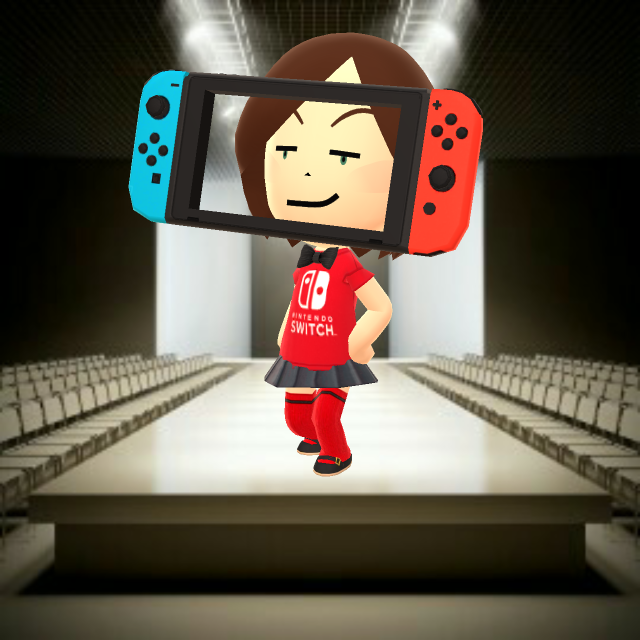 Says the unattractive middle aged b.....
Click to expand...
she isn't worth your time anyway. There's plenty of so called "nerds" with significant others and fulfilling lives on this forum alone. She must have the salts.
P

will go great with my jacket 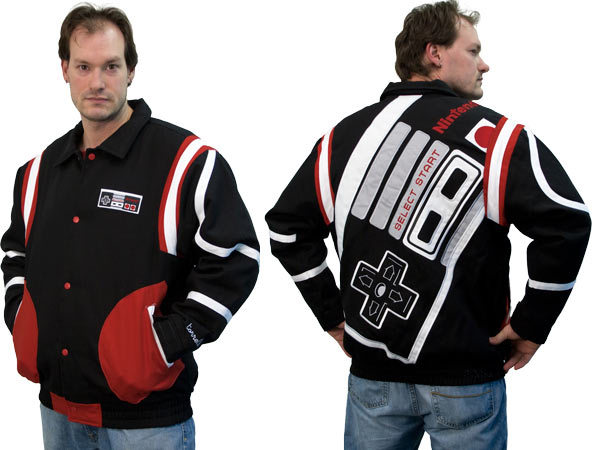 RRockman said:
she isn't worth your time anyway. There's plenty of so called "nerds" with significant others and fulfilling lives on this forum alone. She must have the salts.
Click to expand... 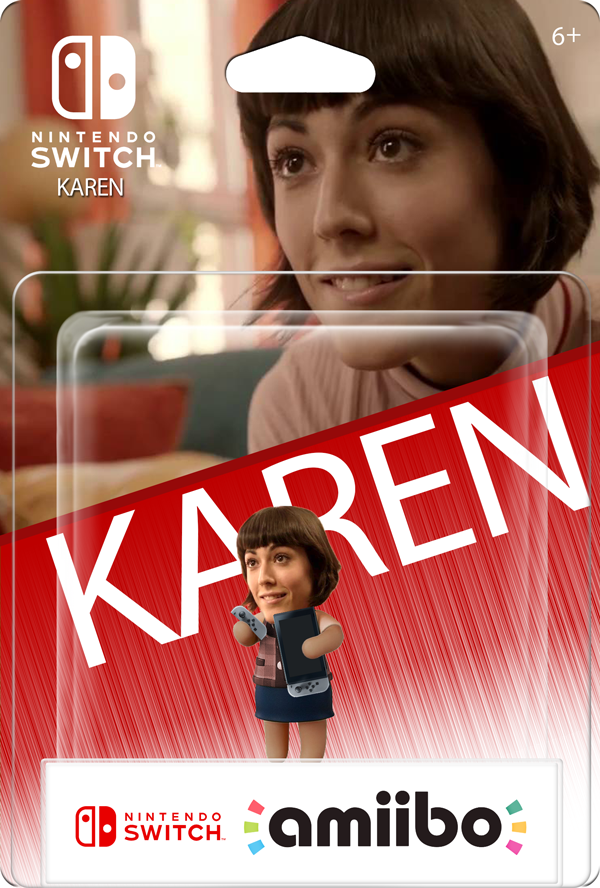 Anything to advertise the Switch sounds good to me.
P

Says the unattractive middle aged b.....
Click to expand...
RRockman said:
she isn't worth your time anyway. There's plenty of so called "nerds" with significant others and fulfilling lives on this forum alone. She must have the salts.
Click to expand...
Carry on, nerds
N

Click to expand...
Considering the body is Isabelle's and Isabellae's hair is sort of tne same as Karen this doesn't seem like the hardest custom Amiibo to make.
G

imagine being so offended by being called a nerd you have to "insult" someone back... :/
S

But will I become more attractive when I dock the console?

I was playing the Switch today on the train. No joycons, just the tablet. A little bit of VOEZ and Human Resource Machine. The unsuspecting passengers had no idea
A

udivision said:
Oh but if it was Belda no one would care.
Click to expand...
Ok that was good. Lol.

Edit: I agree with whoever said shoulda been neons with that jacket. My first thought. Neons are sexy as hell.
Y