Brink becomes F2P 6 years later(well, effectively free since there's not much to buy)

I pre ordered this game and put 57 hours into it. I remember it being kinda fun, but it was the time around which I switched from MMOs (world of warcraft) back to SP/console/FPS games, so for me anything new was interesting

Brink will hit an all time peak in the next two days that is higher than LB's peak, thats my BOLD prediction.

(Sorry for the back to back posts)
B

Well we have Dirty Bomb now. So it's not really needed.
J

I actually really enjoyed this game around release and put quite a few hours into it. I had seen all the negative reviews, but was peer pressured into buying it.
F

My main memory of Brink was it looked awesome, had great ideas.. had 100% control and buttons customization on console, remap, sensitivity for everything.. and then they didn't put in basic stick control customization. Couldn't even play it. So I passed on it.

I'll try it now though.
M

I'm so confused by this.
Like there's gotta be more to it than just making it free right?

Would that REALLY warrant a spot on the Steam home page?
M

I'm still puzzled by this game. The Dev made one of the best multiplayer games ever in RtCW, art was beautiful, gameplay concepts were really cool and it had tons of marketing behind it. How could it end up so wrong?
J

GUN-NAC said:
You still need to mess around with loading your own local server. Note that this messes up the challenge mode maps that involve AI teammates, you'll be on your own if you use this method -- I think. Animation will remain @30 fps just like in ETQW.

Oh. What a shitshow.

I remember kinda liking Brink when it came out despite not having internet at the time, so I might play this.
V

I blind bought it on ps3 ages ago. For 2. There was noody online, so I gave it to someone. Maybe I'll get it on PC to play with the 70 lonely souls messing with the F2P version while it last?
C

Did it really tho?
J

I remember playing the PS3 version with a group of friends on launch night and textures took a full minute to load in, performance was sub-30FPS and the servers were crumbling so we were rubberbanding everywhere. If I recall right, one of those friends ran over the disc with his truck about a week later.

Thanks for the memories, Brink.
E

Crossing Eden said:
Did it really tho?
Click to expand...

For it's time. There wasn't a lot of FPS games that had Mirror's Edge style movement.

Magwik said:
I'm so confused by this.
Like there's gotta be more to it than just making it free right?

Would that REALLY warrant a spot on the Steam home page?
Click to expand...

It's possible that there's going to be some kind of update for it that was intended to go live during Quakecon, but Steam jumped the gun on the F2P part of it.

I'm pretty sure I got this for free when I worked in electronics at Target through that retailer associate website that Bethesda used to run.
S

Widge said:
Where did Brink go wrong?
Click to expand...

the game is like 95% of the way to being decent
i didn't play it a ton, but with low enough player counts on maybe some of the maps i think it worked fairly well

it's just the maps were claustrophobic to accommodate the low fov of consoles and the weapons weren't very precise (lots of spread. strange balance decisions) to accommodate analog sticks

brink also ran like crap at launch, so it never really had a chance (this is also why ETQW died)

Back from the Brink baby!

This game was one of my first disappointments. They boasted they were bringing back team play and since it was splash damage i was hoping for a kind of RTCW style of gameplay.

StrategyFan said:
brink also ran like crap at launch, so it never really had a chance (this is also why ETQW died)
Click to expand...

I think ETQWs downfall was its emphasis on vehicles - it diluted the CQC chokepoint objective teamplay where SD games are at their best.

Still waiting for a game to match Enemy Territory. None of their followups have hit the mark.
M

That is weird with Dirty Bomb just getting an update. But I'll download it anyway. Maybe they want more people to buy the last two maps for $1.79 lol.
N

sixteen-bit said:
Didn't the launch of this game coincide with the apocalyPS3?
Click to expand...

This game had some great ideas and was ahead of it's time in more ways than one. It just needed at least another 6 months of polish and tuning. The netcode was worse than Gears 2. There was also very little use of the heavy and light characters. Still, the time I played a full match at Quakecon with no bugs was a blast.
F

sixteen-bit said:
Didn't the launch of this game coincide with the apocalyPS3?
Click to expand...

ElBoxyBrown said:
For it's time. There wasn't a lot of FPS games that had Mirror's Edge style movement.
Click to expand...

True, but I feel like it's kinda showed why. They straight up botched that system completely with that incredibly bad level design.
B

It was literally the buggiest game I'd ever played and was incredibly low resolution and full of jaggies on Xbox.

And it was still one of the best shooters I'd ever played, with fantastic movement and gameplay that required precision coordination for success.
N 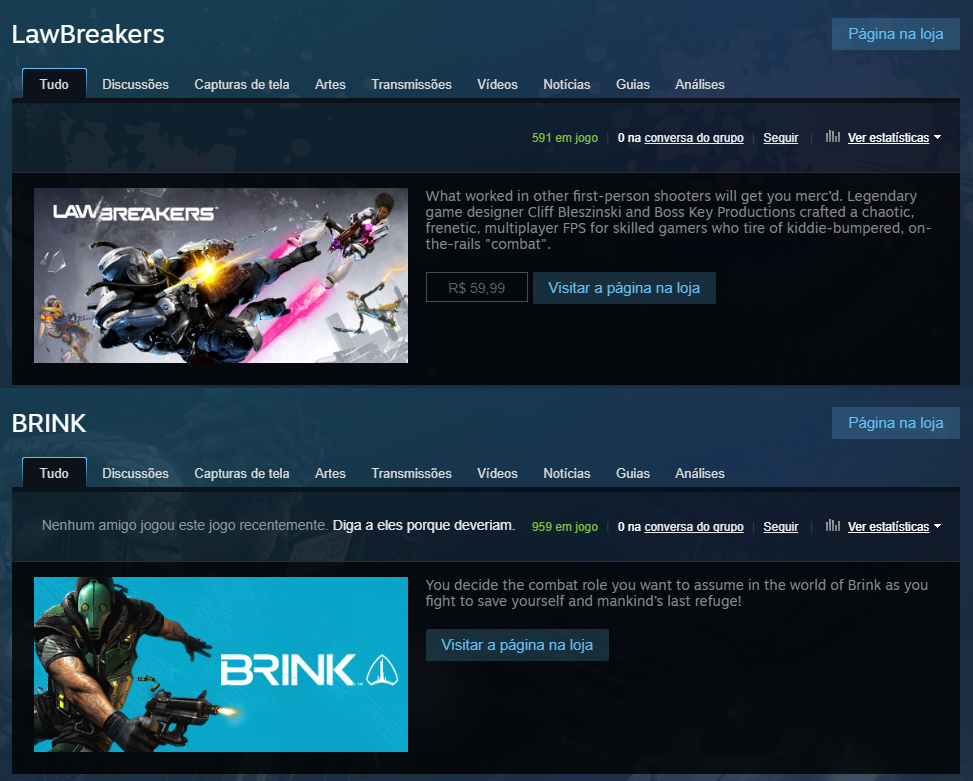 Bought this game 5 or 6 years ago and the servers were empty.

Will give it a try AGAIN this weekend.
B

I always liked Brink, complete clusterfuck of a game technically but when it worked I really enjoyed playing it. Put a good few hours into it as well on the 360 from what I remember. I also remember its shotgun being an absolute beast.
S

and some body types could get to places the others couldn't and i remember feeling like that was a huge bummer for some reason?
O

LordRaptor said:
I think ETQWs downfall was its emphasis on vehicles - it diluted the CQC chokepoint objective teamplay where SD games are at their best.
Click to expand...

I don't think that's true honestly. Most of the maps funneled down to infantry only finishes and the vehicles had many counters (EMP being the main one). The vehicles were easy to avoid if you wanted to. Not to say that people didn't become super good with them, just even if you were a monster you were limited to certain areas. Now I won't say ET:QW was a better game because of vehicles since I spent like, less than 10h in one with a 300h+ playtime, but the emphasis was still on infantry combat.

It had a very rocky launch with tons of crashes and issues that weren't really ironed out until 1.3 and beyond. I feel most players had already moved on by then. The Beta did it no favors as people coming from either Quake or ET weren't ready to give it a chance. It is its own thing and it works well. It was a bit clunky on the technical side but it was certainly something you got used to.

I will say that from a balance standpoint the variation between objectives meant that you never really had a sweet spot for player count. 24 players worked well when objectives were spread out, but like I said you often got funneled, and when you got indoors it got quite chaotic. 16 players meant that you had a lot of open ground with not much happening since the maps are huge, it needed more coordination than pubs could usually supply. 12 players or 6v6 was the standard for comp but that meant that vehicles were suddenly way more powerful and needed to be disabled. 8 players or 4v4 became the norm as the comp scene dwindeled. None of these were ever ideal, BUT it meant that the gameplay varied a lot across the map as it went from really large to very narrow and spammy.
F

Given how much they were hyped up and just equaled too "you can vault some stuff I guess" I actually think they were disappointing.
B

I've always wanted to try this. So yea I'll install it.
S

I got this more or less when it came out for the ps3 and I don't remember the mechanics coming close to blowing me away even for the time. Traversal-wise, I don't think Titanfall 1/2 accomplished much more of what Brink set out to do, even if its focus wasn't on parkour in the way Brink's was.
B

It's really bad game. Some nice concepts but overall not good
V

Is it weird that I constantly confuse this game with Rage in my head?
I

As Sartre noted in his contemplation on Hell in No Exit, the true horror is other members.

Lol as if Lawbreakers didn't already have enough competition
I

WHAT YEAR IS IT
S

hydruxo said:
I still regret buying this game to this very day.
Click to expand...

I'll give it a shot. I have had people tell me it's better than you'd think.
B

I didn't know lawbreakers wasn't performing that well. I knew they should have stuck with f2p route.

I bought this game at launch and I can remember almost literally nothing about it.

One of my favourite online shooters, so anything to drive the online community back in somewhat.

I bought it at launch on 360 and actually quite liked the game itself but recall it being plagued with networking problems. I can't remember if it was getting dropped constantly or just unplayable lag, but I remember their 'solution' was to patch the game and half the maximum player-count so even a full match was half players and half bots.
You must log in or register to reply here.

Feb 28, 2020 started Bullet Club
Feb 28, 2020
Spukc
E3 2021: Xbox has everything to prove, it's time to show off the fruits of its software investments and there's little margin for error