Pennywise83 said:
So, yeah, what I can get from this nice debate is that SQEX is still willing to put out middle-sized project. Those are converging towards the mobile market, of course.
Click to expand... 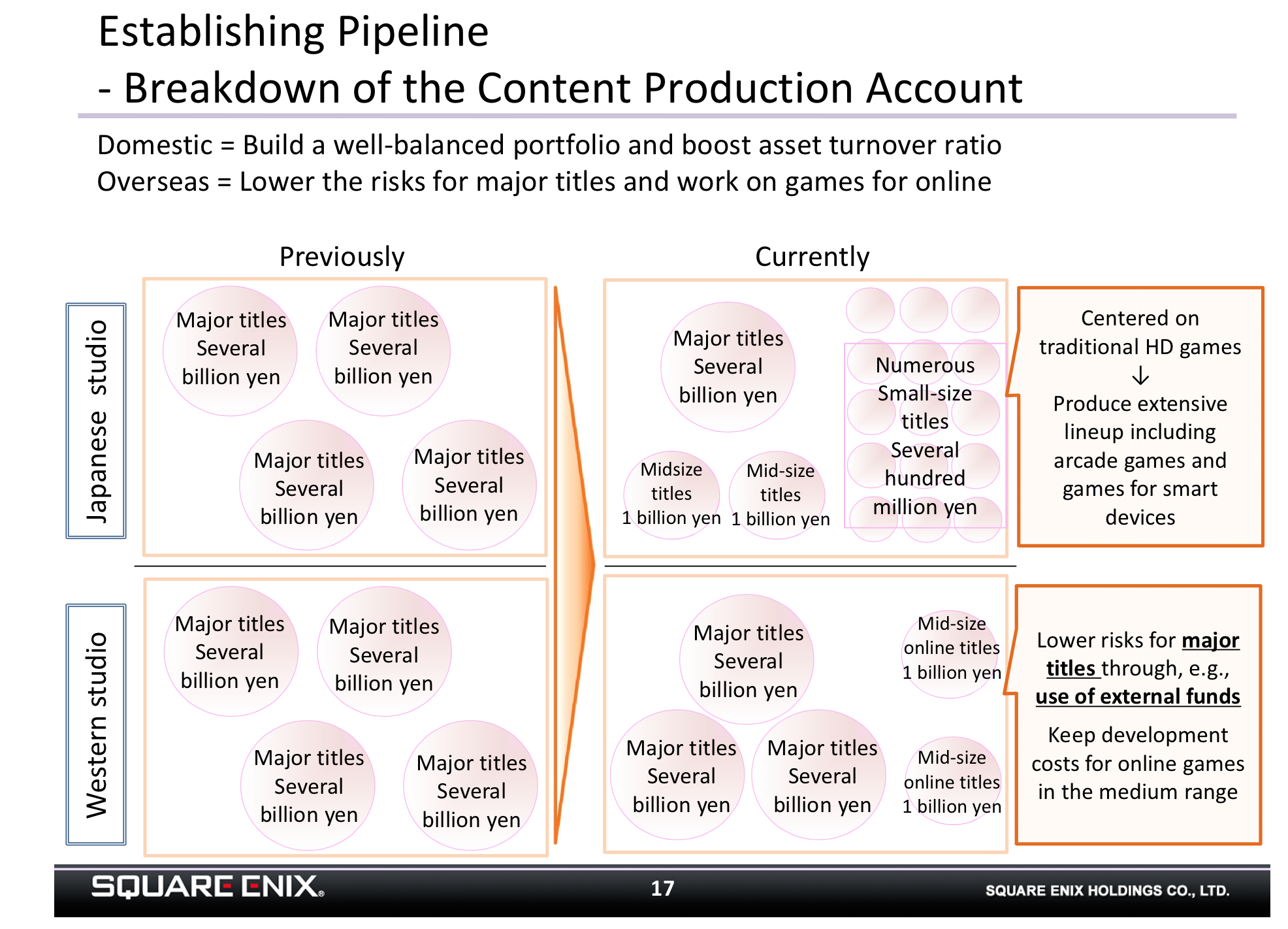 Overall, I don't think they're willing to fund things that, for example, are handheld titles they feel will sell 200-400K units worldwide.

Now, if the titles do only sell that much, I don't feel that invalidates that opinion unless they continue to actually make that series despite what it's selling.

Basically I see Square Enix as a company that's focused on high margins, and the vast majority of high margin titles fall into a few categories:

2.) Relatively high earning mobile titles (they seem okay with supporting top 100 titles), which is part of why they abandon titles that fail after 6 months and focus on new ones with higher potential instead. They do release some ports of titles (and things like Hitman Go), but they have noted these are basically to onboard people onto the products that make a ton of money and they usually have very small teams (Hitman Go was made by 4-5 people, and the other games are often straight ports or really quickly done titles with sprite filters).

3.) Handheld games that are selling 1+ million units while not costing a fortune to make. It's plausible that Theatrhythm's costs are so low and DLC sales so good that it bucks this trend and is high margin despite this. This can also extend to Japanese market specific console titles that are made for a relatively low budget. Dragon Quest Heroes is going to be much closer to 1 billion yen than 10 billion yen, so it can sell in line with the handheld titles (or even adjust for price and sell less) and get the same margins.

4.) Major AAA blockbusters where the sales hopes are usually in the 4+ million unit range. These are your standard Final Fantasy mainline titles

5.) In the West, f2p PC games, which is their newest business line (Nosgoth, Triad Wars). They don't have big earners here obviously, but they hope to some day, and it's not hard to name off a bunch of major successes other companies have in this category.

To tie this all back to the original question, someone at Square Enix sat there and went "Having these people work on FFXIV makes more sense than Final Fantasy Tactics Advance 3 because the margins will be better versus their time, since they're senior staff and FFXIV is a big hit and FFTA3 isn't likely to make a ton of money to make switching them over worthwhile."

I think if we look at their decisions through this high-margin title lens (and often high sales goes hand in hand with that at retail), Square Enix's decisions become less confusing, even if their ability to execute is poor. Square Enix's tagline for Hitman Absolution was "The Original Assassin" and they set sales expectations at 4-5 million for the fiscal year, which is about half of what Assassin's Creed does in its first few months. They didn't hit that, but their statement there is pretty clear, and I don't think that changes the original intent of the strategy.
S

TWEWY is dead. Don't play with my emotions.
C

Stuff like that signals to me that Japan is just wait for the right games to get on the PS4 train, let's see how things go next year.
Click to expand...

Just like Vita, ps4 will explode any moment now.
M

Hm, starting to wonder about the PS4

I dunno, If CoD or WE is giving a bump, maybe actual big games will have a bigger impact than I initially thought.
Not saying it will be a success by any means, but that it might supass the Wii U more quickly than my initial prediction. That's...about it.
V 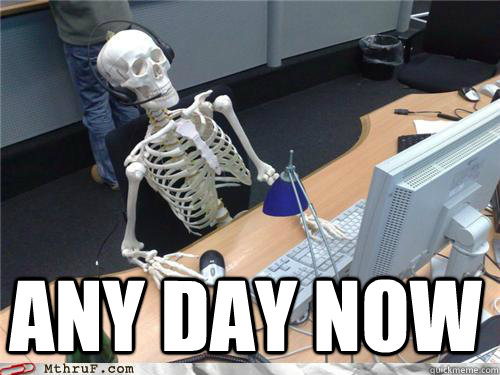 On a side note, what are people's expectations for Pokemon ORAS? 1.6-1.8 million opening sound reasonable?
A

Ever since the new demo Comgnet's preorders for PS Nova have gone up quite a bit daily. Maybe not a bomb!
Z

Arzehn said:
Ever since the new demo Comgnet's preorders for PS Nova have gone up quite a bit daily. Maybe not a bomb!
Click to expand...

Yeh, preorders are looking better more recently on comgnet for Nova, although it's releasing in 9 days.

It'd be nice to see how it is performing compared to previous entries and Freedom Wars and God Eater 2.
H

Moor-Angol said:
your school is in Shibuya? which one?
Click to expand...

No, it is in Shinjuku (Takadanobaba). But my Teiki reach until Shibuya, so it costs no money for me to go there, and it's just 15 min.

Less than 30 min for the numbers
L

20mn until we get some interesting numbers. Curious to see what Media Create will do with the MK8 bundles.
L

The blog was right with the huge increase of One

That's the big bundle launch for Wii U?

Wow at Wii U (sort of, lol). Dunno how will that last but just keep selling Wii U!

COD managed to get XBO back into 4 digits I'm guessing.
L

Game has been out for several months, and has sold over 700k. I say that's pretty normal, especially since this bundle doesn't have 2-3 games like last year's.
C

I'm not sure 14k weekly sales is exactly cause for declaring gwave rising...
G

why the fuck isn't there an XB1 coffin.gif?
T

Looks like MC does count the bundle this time around.
J

Cosmo Clock 21 said:
I'm not sure 14k weekly sales is exactly cause for declaring gwave rising...
Click to expand...

It is when it's Japan who seem to despise home consoles.
S

What's with the 10k+ discrepancy between MC and Famitsu on total n3DS numbers?
H

random25 said:
What's with the 10k+ discrepancy between MC and Famitsu on total n3DS numbers?
Click to expand...

But Famitsu does the one counting the download cards, not MC.

When 3D printers will be quite spread, sir. Believe.

This differenze between MC and Famitsu reminds me of the differenze for Wii U back this Sunmer.

Moor-Angol said:
about Youkai Watch 2.5 : is that really just an updated version ? As far as I understand it's tied to the movie which will be launched the week after, so I presume the story is different from YW2
Click to expand...

People seem to think it's just the exact same game with a few extra youkai. The game was always meant to be 3 versions it's not just some suprise cashgrab update, i realised this when i discovered masknyan in the end sequence of ganso & honke he can't be obtained in either yet he was in the ending, along with the fact that the shadow masked kaima youkai appear in the encyclopedia but can't be made friends with.

The story in shinuchi does seem to revolve around the story of the film not sure if it replaces the main story quest of ganso & honke or if it's a bigger side quest. Even in ganso & honke had different main stories at one point in the game, there is now also a youkai train that takes you to a huge resort area with an amusement park and traditional onsen. Along with those, you can find new exclusive youkai to shinuchi and also unlock a lot of new youkai when you link your shinuchi version with ganso & honke. The houseki nyans were only available in the first game via really hard to get medals they are now available in shinuchi if you link it with your previous games it unlocks a dungeon you can find them in.

The official website lists all the extra stuff but i imagine there's a lot more hidden away as they are not going to list everything that's new.
You must log in or register to reply here.