Overall retail sales were up 2% year over year.

Retail hardware sales were up 11% year over year.

Retail software sales were down 7% year over year.

Notes:
- &#8220;November 2015 was the best month for Xbox One, PS4, and Wii U software ever, exceeding the second-best month December 2014, by 34 percent,&#8221; said Callahan.
- &#8220;Call of Duty: Black Ops III was the top title in November 2015 with sales exceeding that of its predecessor, Call of Duty: Advanced Warfare,&#8221; said Callahan.
- &#8220;Fallout 4 performed extremely well. Adjusting for days within the data month, this was the best Fallout launch in the history of the franchise having sold over 70 percent more units than Fallout: New Vegas and 9 percent more units than Fallout 3. In fact, Fallout 4&#8217;s launch is more comparable to Bethesda Softworks&#8217; other successful launch of Elder Scrolls V: Skyrim.&#8221;
- &#8220;EA&#8217;s Star Wars: Battlefront had the best first month sales for any Star Wars game, exceeding Star Wars: Force Unleashed by 21 percent,&#8221; said Callahan.
- November was the biggest month ever for the PlayStation Store, and this year's Black Friday was the best Black Friday in PlayStation history.
- Call of Duty: Black Ops 3 is the best selling game since 2013

Notes:
- &#8220;November 2015 marked the best month ever in total unit sales when you combine Xbox One, PS4, and Wii U, surpassing sales of December 2014 and November 2014,&#8221; said Callahan.
- &#8220;Within console hardware sales there were dramatic differences by console generation as eighth-generation consoles, [which includes Xbox One, PS4, and Wii U] sales rose by 22 percent in dollars and last generation sales dropped by 76 percent in dollars, which is sharper than the year-to-date decline of 57 percent,&#8221; said Callahan. &#8220;In November 2015, eighth-generation sales had 93 percent share of overall hardware sales, a 9 percentage point increase from last November.&#8221;
- &#8220;After 25 months, the combined sales for the PS4 and the XBO are 47 percent higher than the combined sales for 25 months of PS3 and Xbox 360 hardware sales,&#8221; said Callahan.


Sony PR said:
&#8220;PlayStation 4 is the top-selling console in the United States during the month of November, according to NPD. We have hit several key milestones over the last few weeks. Prior to Black Friday, we announced we have sold through more than 30.2 million PS4s to consumers around the world and that PS4 continues to exhibit the fastest growth in PlayStation hardware history. In addition, Black Friday sales were the strongest in PlayStation history demonstrating more people game now than ever before. We are also pleased to announce November was the biggest month ever for PlayStation Store indicating a strong digital marketplace complementing healthy retail sales.&#8221;

Activision PR said:
&#8220;Black Ops III was the largest release in North America in November by a wide-margin in both units and dollars sold-thru," said Call of Duty SVP and GM Rob Kostich. According to NPD, Call of Duty also was the largest release of any title in North America since 2013, based on physical units sold at retail in its launch month. There&#8217;s tremendous momentum for Call of Duty this holiday. Both retail and digital sales are up significantly versus the same time last year. And our community has responded enthusiastically, driving engagement to new franchise highs on next gen consoles in its first month of release." In case this is real, congrats PS4.
L

What a boring top ten
D

Need for speed made it?

Quoting from other thread:

Hmmm, Black Ops 3 Xbox One > PS4. Because of bundles maybe?

Now we wait for details.

Microsoft and Sony both killing it.
O

INDUSTRY IS SO HEALTHY YA'LL

THESE ARE GREAT DAYS

PS4 will be the most profitable console in Sony's history.

Not even in top 20 if I read Queso's post well.

But I thought Call of Duty was dying.
P

I wouldn't be surprised if XB1 > PS4 with bundles.

The audience has been on Xbox for a while now.
F

Hopefully someone will quietly slip in a rank number for Tomb Raider. It deserved better.
D

PS4 is kind of a beast
P

Wait a minute, something seems off about the top 10... Sad, but not as sad as I am about having to wait a full year for the game.
R 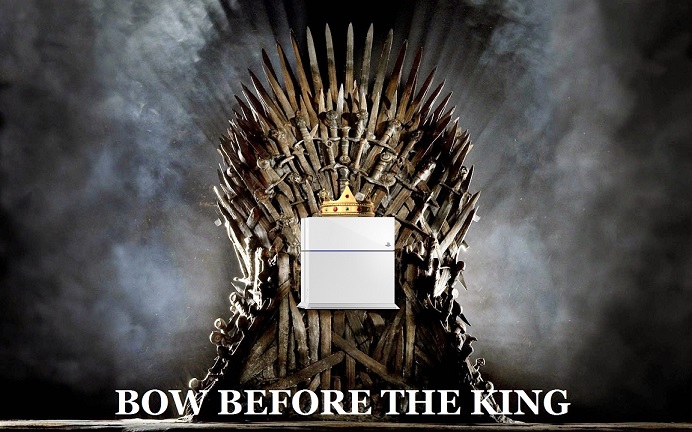 Seriously, if the rumored numbers are true for PS4..... insane. INSANE!
L

Broken down by category, hardware sales were $1.12 billion, which is up 11 percent from $1.02 billion last year. Software clocked in at $993.9 million. Thats a 7 percent decline from the $1.07 billion new games generated in November 2014. Finally, peripherals and interactive toys  think the games with action figures like Activisions Skylanders and Disneys Infinity  grew 6 percent to $357.7 million from $336 million.
Click to expand...

&#8220;Last month was our best November ever in the U.S. for Xbox One, setting new records for console sales, game sales and Xbox Live engagement. The most critically-acclaimed holiday lineup of exclusives in Xbox history helped drive 44 percent growth in Xbox Live hours over last November, and 72 percent growth in U.S. first-party retail game sales comparing sales from August through November in 2015 to the same period last year. It&#8217;s amazing to see the energy from Xbox fans for exclusives like &#8216;Halo 5: Guardians,&#8217; &#8216;Rise of the Tomb Raider,&#8217; &#8216;Forza Motorsport 6,&#8217; &#8216;Gears of War: Ultimate Edition&#8217; and &#8216;Rare Replay,&#8217; for the incredible catalog of third-party games on Xbox One and for Xbox One Backward Compatibility, which launched in November. This holiday is shaping up to be a great one for our industry and for Xbox fans.&#8221; &#8211; Mike Nichols, Corporate Vice President, Xbox Marketing, Microsoft
I

man this just sucks for Tomb Raider. Such a great game gets outsold by Just Dance due to poor release date and xbox exclusivity.

Dammit we'll have to wait for hardware leaks. MS didn't even give out PR.
K

So the marketing deals for FO4 and Blops III had the opposite of the intended effect (unless bundle sales were insane).
P

Just Dance and no Tomb Raider,the world is an odd place
T

Can't believe Need for Speed sold enough to chart. Now we're never getting a sequel to Porsche Unleashed, instead we're going to get more of... that. Yuck.
O

Shame that Rise of the Tomb Raider didn't even get in the top ten for software as it's better than the majority if not all of those games on that list. So sad.
M

Shame about Tomb Raider, maybe it will end up being a good thing if it discourages those kinds of deals in the future.
P

How long have you been planning this?
J

Software sells hardware. This month there was practically next-gen only Call of Duty, beloved Bethesda RPG Fallout, and Star Wars craze fueled Battlefront. Not surprising that hardware is up.

Lol at Just Dance leading on Wii. It's still kicking after all this time.
M

Nice job! Halo 5 showing up is a good thing after so much downplaying. PS4 did amazing.

Oh, and it looks like XB1 sold the most Blops 3 copies, more than PS4.
inb4 bundles and digital make PS4 higher
Wii is still alive!
You must log in or register to reply here.