Let's come together as a community and show Sega that the demand for Bayo, Vanquish, VF5, Valkyria Chronicles, and more is there. 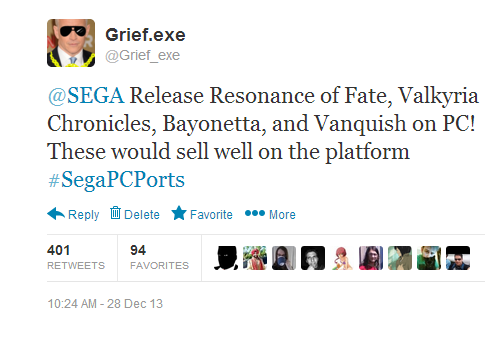 I cannot find a reason for any of these titles to not be on the platform.

Bayonetta - There is a dearth of character action games available right now and Rising, a Platinum game in a similar vein to Bayonetta, was the top seller for 48 hours during the Steam sale on its debut.
Vanquish - 120 FPS, do I need say more?
Valkyria Chronicles - Strategy RPGs are the platform's bread and butter
Resonance of Fate - The FFVII and FFVIII releases on Steam have sold quite well despite not being the best of ports and so late. The battle system for this game seems well-suited for higher frame rates.


Feel free to request other Sega games as well, there are plenty of contenders so pick your favorites!

I just retweeted you, because you asked for everything I would ask for.
V

Already did my part

I don't have a Twitter but I would Instabuy Vanquish and Bayonetta.

I would LOVE to see more of this.
K

Did 2 tweets myself already!
S

I Retweeted but alas, this isn't going to get very far most likely.

There is no way in hell we're getting any of the Platinum titles or Yakuza, but I can see us maybe getting some of their Legacy titles like Skies of Arcadia or JSRF.
D


Those are mailing addresses. I'm not sure what you do with them exactly, but people used to use them for something.
E 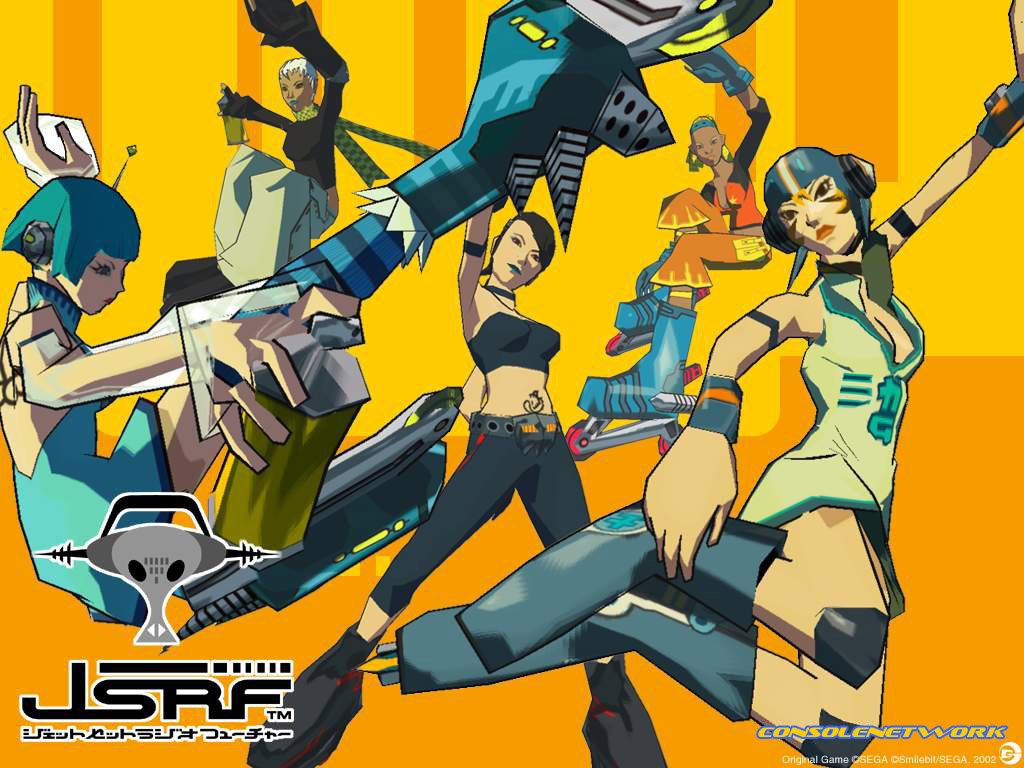 Just retweeted. Get on this GAF!
O

I have requested some Valkyria Chronicles, and Megami Tensei. PC is still very much an untapped market for these type of Japanese games, I think it could a profitable venture for Sega.
E

Holy crap, I'm drooling at VC for PC. How have I never thought about it before? The game would work perfectly on KBM.
G 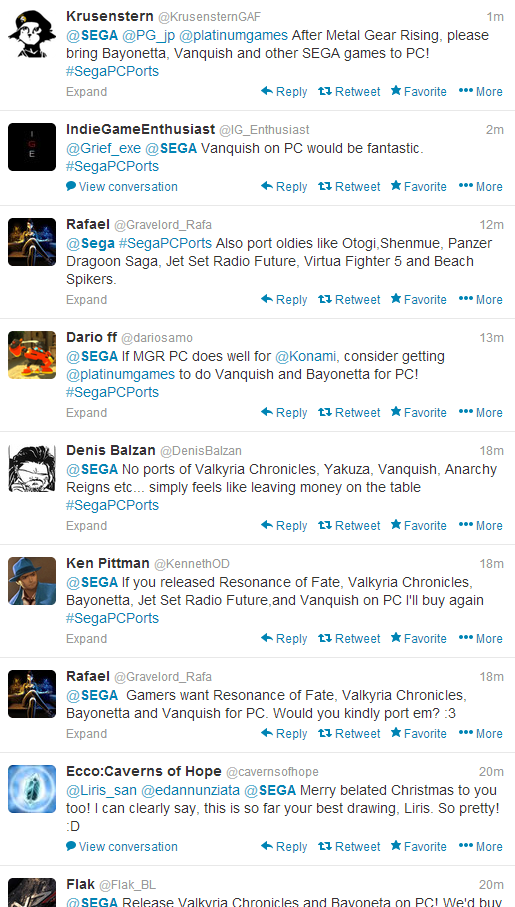 i can get behind this port begging

wow, that was the first game I got for the original Xbox, loved it.
C

Mass Effect said:
There is no way in hell we're getting any of the Platinum titles or Yakuza, but I can see us maybe getting some of their Legacy titles like Skies of Arcadia or JSRF.
Click to expand...

Why not? We're already getting one Platinum game next month. Yakuza I highly doubt though, seeing as they're not even releasing the new ones on consoles any more.
B

Durante is going to be very busy if all this happens.
C

The scenario I don't want to see is that Sega decides to port all of these games, but begs Durante to fix the games for them


Beelzeboss said:
Durante is going to be very busy if all this happens.
Click to expand...

Which is something that doesn't need to happen
G

Beelzeboss said:
Durante is going to be very busy if all this happens.
Click to expand...

Sega has proven to be well-suited in that department. They have quietly become a PC powerhouse in the past year or so.
D

You missed the most important one.
http://i.imgur.com/V5cAc8L.png

Please no. But you never know from them since we got a japanese re-release of Shadow the Hedgehog on PS3 for no reason.
Platinum Games sounds the most likely studio to do any of their titles given their recent experience with porting MGR PC, new sales data available for this genre (DmC for Capcom, MGR Pre-orders for Konami), and could even take the chance to do the requested Wii U port of the first Bayonetta as well at the same time.
R

Did my part! Could use some climatic action on pc.
M

Those games would rock on PC!
C

Did my part. Honestly though I could do several of these tweets and run out of characters every single time.
A

Wario64 just tweeted the thread, seems a good start. I just tweeted at Sega as well, I'd love to see this happen. However, I feel that the best chance for any of this happening is this public messaging of Sega plus strong sales of PC Revengeance, and Sega seeing both of these and then hopefully consider funding ports of Platinum's older games. The other games will be a tougher sell.
T

I might be the only one, but I wouldn't mind seeing Mad World, The Conduit, and Rez HD on PC.
V

I would buy all of those games. Thanks Grief.exe for starting this

someone link them to this thread

i would if I could

Grief.exe said:
Sega has proven to be well-suited in that department. They have quietly become a PC powerhouse in the past year or so.
Click to expand...

This isn't Dark Souls or Deadly Premonition here, so I'm inclined to agree.

I'm not being against anything. And I think the idea is great since I've become sort of a PC gamer.

But according to some recent posts I've seen here on NeoGAF, it sounds like port begging isn't allowed. Doesn't this qualify as port begging? I wish the rules were a little more clear. I had read the rules completely and didn't know that scans weren't allowed. And I'm sure there are many rules I don't yet understand.

Anyway, I really hope that all the more SEGA games come to the PC. SEGA has become a really good in terms of a Japanese company in supporting the PC. I only wish they would localize more of their games. I'd really like the Valkyria Chronicles games on Steam. And I've bought almost every single one of their games that's been available on Steam.

Since they have Atlus now, I'd really like to see the Shin Megami Tensei, Persona, and Etrian Odysessy games on Steam. As well as the Puyo Puyo, Shining, Sakura Wars, Valkyria Chronicles and recent Phantasy Star games.

Just a note that there's a PC compilation of the Sakura Wars games released in Japan only.
Localize dat ish, SEGA pls.
T

In all seriousness, if any of these were to somehow happen, prepare for and please understand framerate caps.

I don't think it's reasonable for any of these ports to have resolution caps, but it's very likely that a lot of these games have game logic tied to framerate and it could take significant reworking to get around that. In these situations I'm usually disappointed but understanding.
Y

I want Yakuza and Valkyria Chronicles.

I retweeted you and made my own tweet.
G

Posted this on Reddit as well, give your upvotes to the cause fellow GAFfers!

CopyCat said:
I would buy all of those games. Thanks Grief.exe for starting this
Click to expand...

I would buy all of them as well.

Can we add Sonic 1 and 2 Taxman editions to the cause? lol
T

would buy bayonetta or virtua fighter ports in an instant

well i'd really probably buy anything to be honest
A

Bring it on Sega!
P

I'm still waiting for Skies of Arcadia. Didn't they say they were going to port that?
M

collige said:
Why not? We're already getting one Platinum game next month. Yakuza I highly doubt though, seeing as they're not even releasing the new ones on consoles any more.
Click to expand...

What Platinum game? You're not talking about Metal Gear are you? That was published by Konami, so it's a completely different story. Given that Sega is done with Platinum, I doubt we'll see ports of their games.

But hey, I'd love to be wrong in this case.
D

Grief.exe said:
Posted this on Reddit as well, give your upvotes to the cause fellow GAFfers!

You gotta think of a better title to not get downvoted there. Something more formal/news reporting style should work.
G

The Bankslammer said:
would buy bayonetta or virtua fighter ports in an instant

well i'd really probably buy anything to be honest
Click to expand...

Sega has so many delicious games.

Capcom, Konami, and Square Enix have some games I would like to see as well, but I gotta give the nod to Sega for having the most desired library.

We will turn our focus to the other three when this campaign is finished. The Eye of Mordor needs to focus on one target at a time.
A

Jet Set Radio Future and a Shenmue HD Collection (across consoles and PC) would make them some money and show that people enjoy those brands.
You must log in or register to reply here.

Aug 8, 2020 started IbizaPocholo
Aug 9, 2020
OmegaSupreme
Opinion News What can we expect from Sega in 2020? Any surprise announcements?