I feel like the Mario Franchise is in that unique position where it can make virtually any sport accessible to a wide range of demographics. It kinda breaks my heart to see those sports go to waste as part of the wii sports mix, or as a mindless minigame in Mario Party.

So this is what I'm thinking of:

you have Nintendo's Star Characters starring as Quarterbacks, each with their unique skillshot, kinda like in Power Tennis. They'd have limited uses and activate like the power shot in strikers?
As for the controls, personally, I think a GC Controller would be best. The buttons variety in shape, size and color make it easy to spot open receivers and get your pass on to the right guy.

Additionally, he put together some 3D renders that really paint the picture of this sort of game: 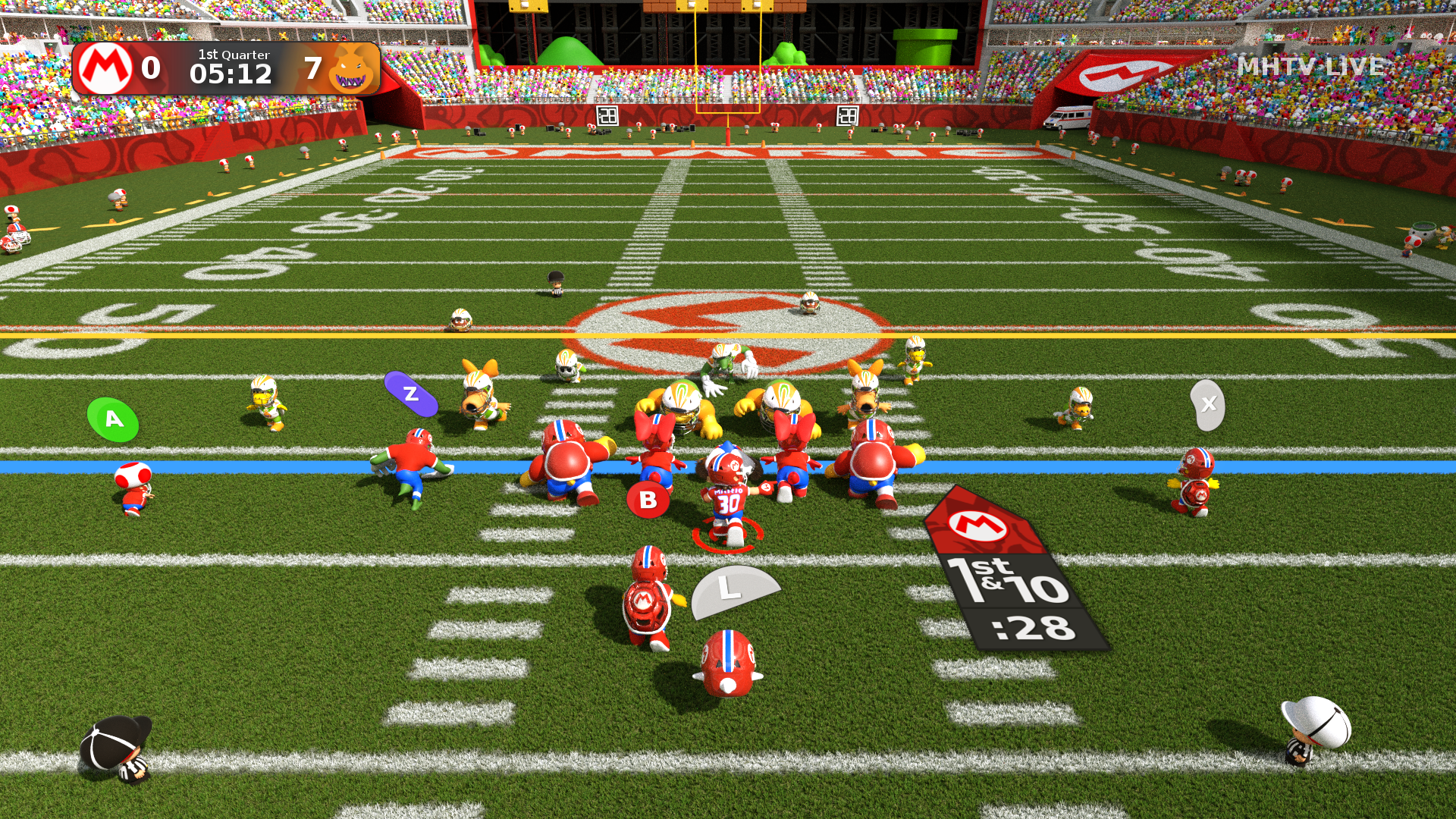 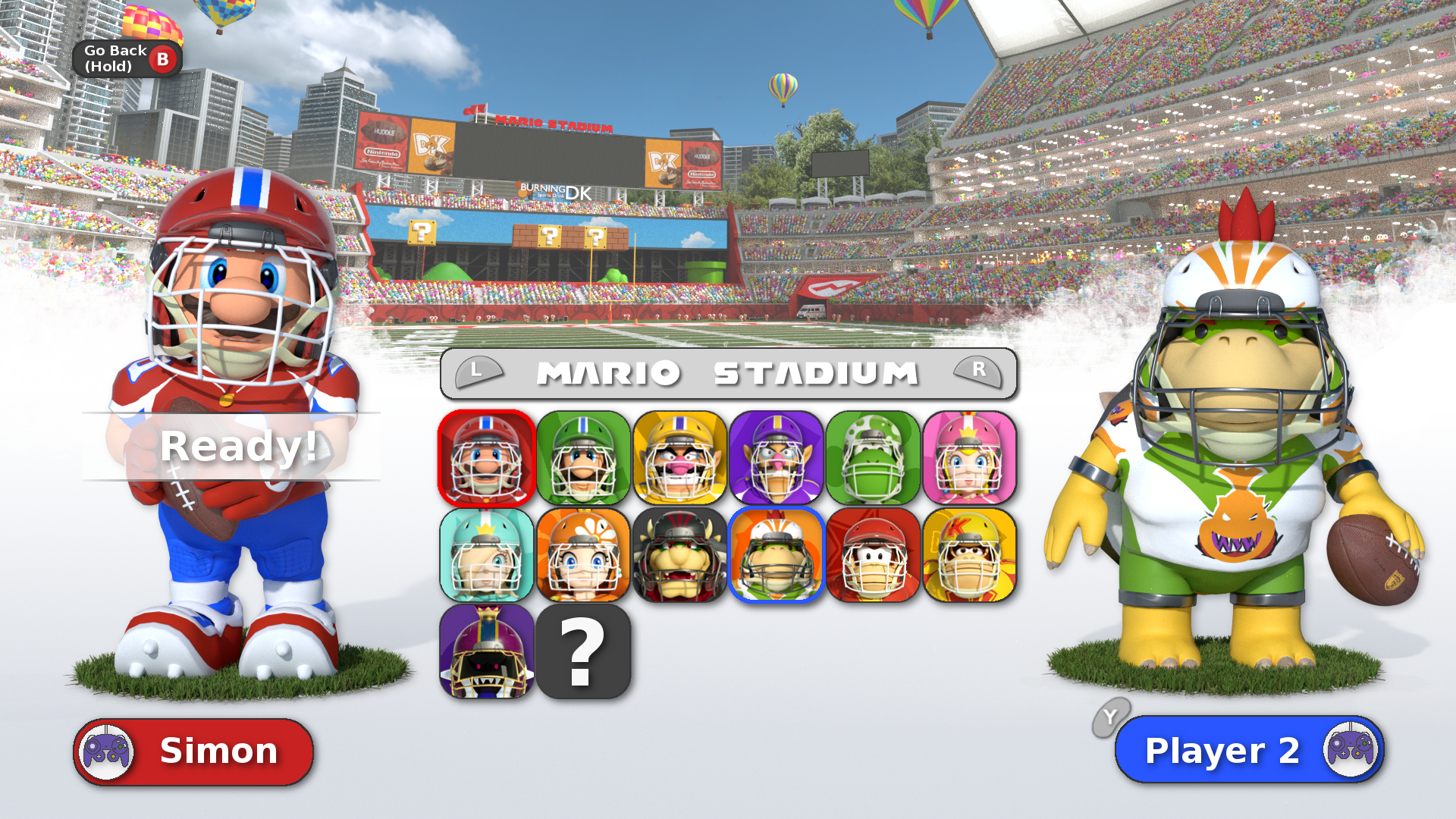 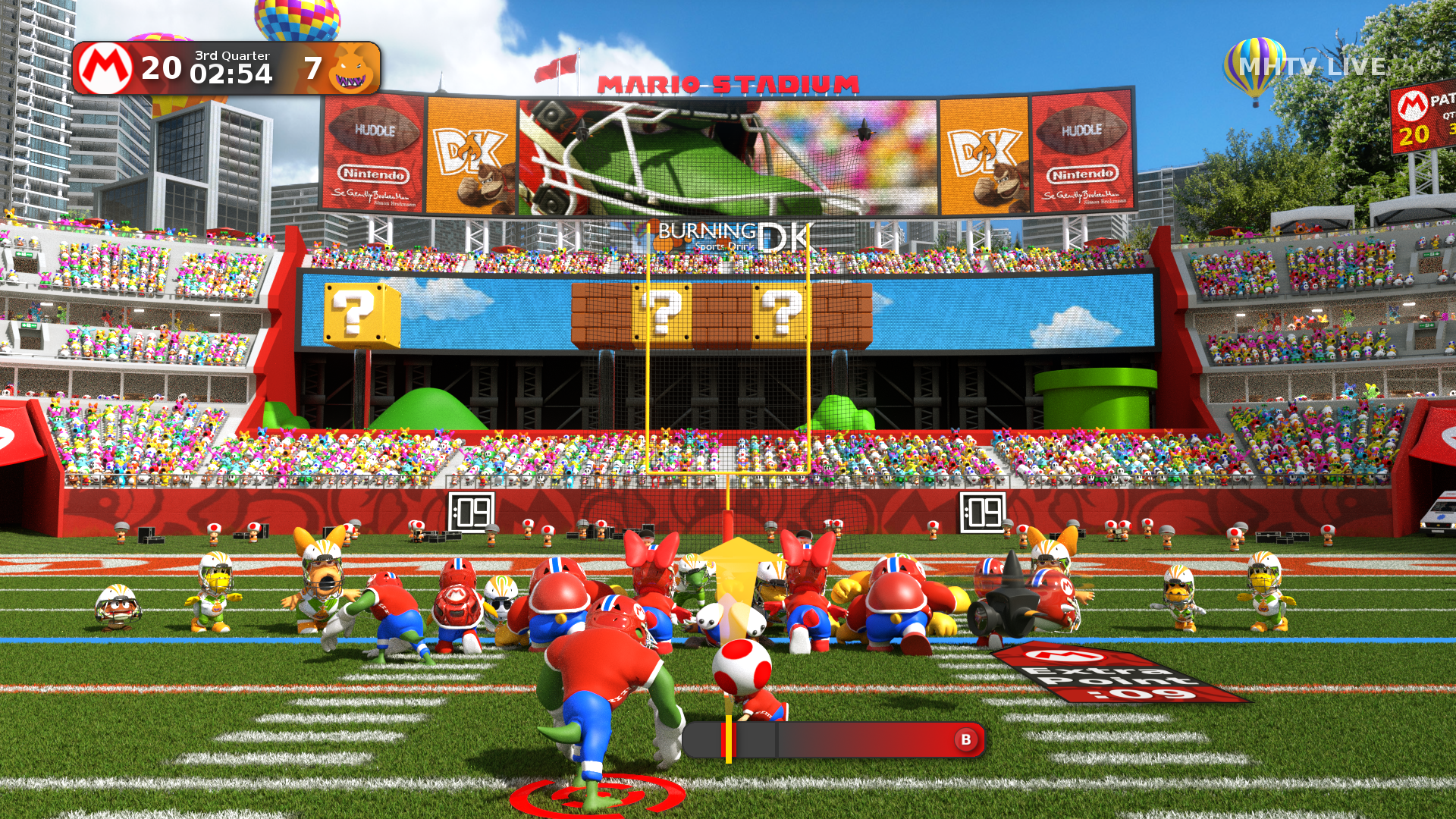 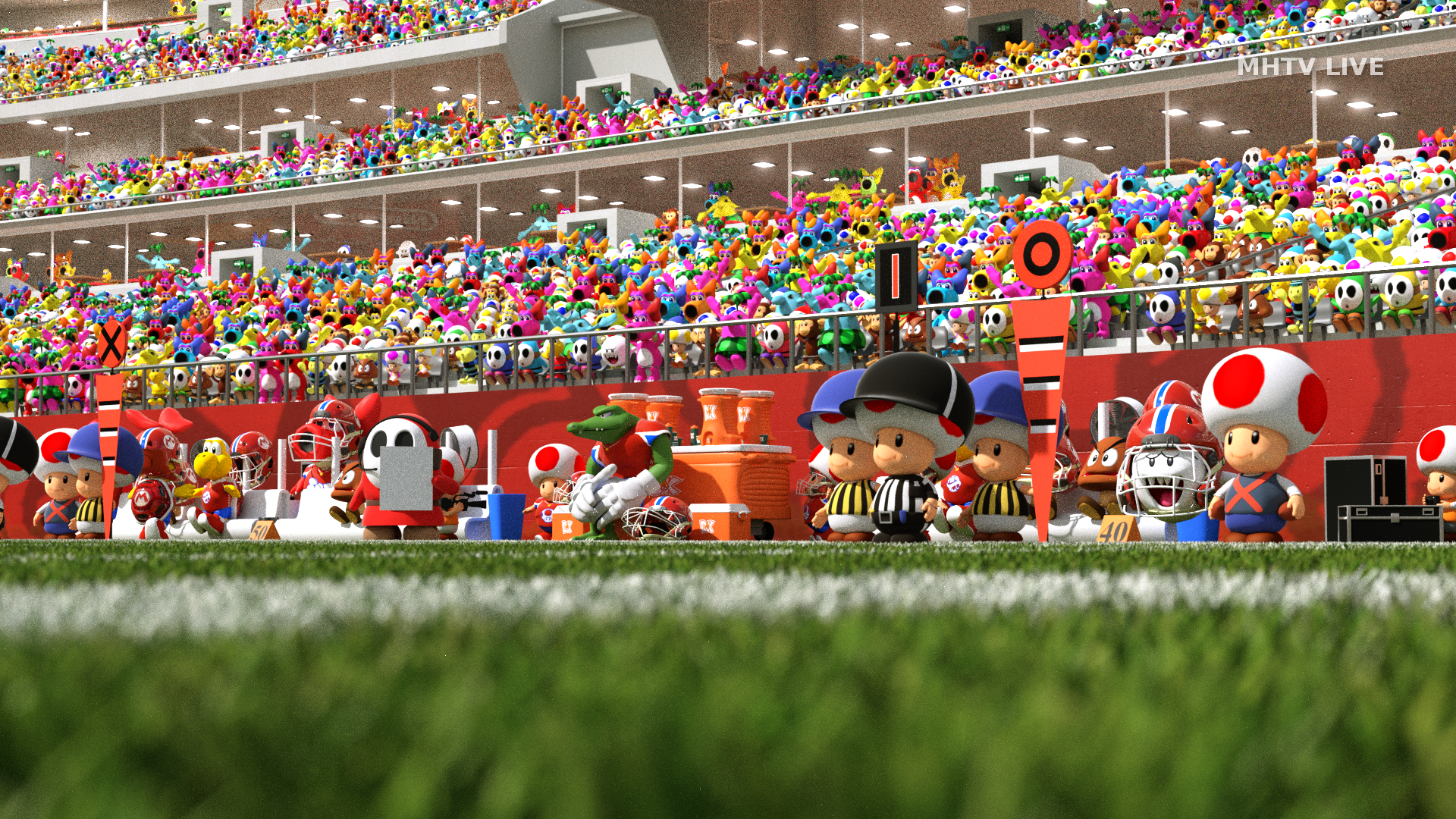 Personally, I'd love to see this sort of game come from Nintendo. Combine the charm and accessibility of the Mario franchise with the sport of football, and they might be able to differentiate themselves from a series such as Madden a la Super Mario Strikers style.

What do you guys think? Would you like to see a Super Mario Football game? What other sports do you feel Nintendo could tap into?
G

There's something really unsettling about these pictures
T

Damn, that Reddit guy went all Make Believe on this.

I think it looks pretty rad; would love to see this happen

That's amazing really want this. I love sport games so much but last 5 years they have turned towards sim instead of arcade game play making the games inaccessible.

I would kill for a Mario vollyball game, it's like a more advanced version of the tennis games
C

I would play the shit out of this.

The film grain on these renders looks terrible though. Very un-Nintendo-like.
G

This would have sold me on a WiiU
M

Looks really cool. It's too bad that the Mario sports games haven't been quite up to their usual standard in the 3DS/Wii U generation (at least, that's my understanding).

That said, Bowser Jr. looks like he has boobs popping out of a low-cut shirt due to the coloring of the jersey with shoulderpads beneath.
H

Honestly I'd play it. Would probably be a lot more pick up and play friendly than the mess that Madden has turned into. Though I will be the first to admit I haven't played a Madden game in depth in years.
R

It'd probably be better than Madden.

Looking good though.
A

We had Mario strikers why not handhegg.
T

Looks really good, though dont know why he did the grain filter on a couple of them. Tons of work put into it, looks great.
O

I'd be more interested in a Mario Cap'n Jazz game
K

collige said:
I would play the shit out of this.

The film grain on these renders looks terrible though. Very un-Nintendo-like.
Click to expand...
Just needs to bump up the render quality with more sampling to help fix that.

Looks amazing though
B

I'd play it. It would be a refreshing alternative to the usual American Football games available. I really enjoyed Sports-mix too, so if they could add some fun gimmicks to the formula, I think it could be pretty fun.
M

This was Retro's first game if I'm not mistaken. It was scrapped more because Retro initially was horribly managed and not because Nintendo didn't like the idea, so I don't think is that impossible it might happen in the future.

Mario and Sonic at the 2016 Olympics has rugby at least.
Z

I would never play this, but it does look pretty cool

Thanos acquires the fully powered Infinity Gauntlet in The Avengers: Infinity War, but loses when all the superheroes team up together to stop him.

You know, something about those renders and portraits strikes me as much more reminiscent of the N64 era Mario style if it were carried into HD than the more recent, slightly cutsier Mario stuff.
B

God damn, I'd play the shit out of this.
P

I like the idea, if they make it more like Blitz and NFL Street with a dash of Strikers Charged and the cast of the baseball game on the wii, it would be perfect.
S

I would buy this so hard. Would get me to buy an NX.
C

aesthetically pleasing unlike all those "hey i threw some Nintendo characters in an Unreal4 demo" videos.
S

collige said:
I would play the shit out of this.

The film grain on these renders looks terrible though. Very un-Nintendo-like.
Click to expand...
That's not film grain. That's noise from the way he rendered this which was probably in VRay or something of the sorts.
S

This is a really ace job - really captures the style and design of Nintendo sports games.

It still boggles my mind that they spent the last years just rehashing Tennis and Golf instead of finally doing a football game. Hell, they made two Eyeshield 21 games so it isn't like they don't have a framework and ideas to build off of.
D

Meanwhile, Europe is still waiting for Mario Super Sluggers.
I

I'd prefer for Mario and the gang not to get serious brain injuries.

This doesn't exist because Nintendo is a worldwide company - no one cares about American Football outside of Canada and the U.S. They could easily make another golf, kart, or tennis game and appeal to a worldwide audience which equals more $$$.
F

the shy guys don't even talk, how can they come up with plays
lol dawww those toad refs

DO IT NINTENDO
J

All damn day! Especially if the roster went more towards Smash, with characters from multiple series.
O

Oh man that looks really great. I would love something like this on NX.
A

A Mario football game could be absolutely huge. Especially if they went big on marketing it during NFL games. All the "bro" type guys I know that love Madden and Mario Kart would be all over this.

I would actually play a Mario football game over Madden. No fucking way it could be worse.
K

Why Marios cloud doesnt has M on it.
E

I want this. I really do.
T

Tom Nook Sawyer said:
Though there's no way Nintendo would obscure the character's faces like that with the face masks
Click to expand...
They could make it American rules flag football, and then they wouldn't need the helmets and masks
E

Looks pretty cool. I hope Nintendo will do something like this someday. lol
Edit: also lol Toad with the referee cap.
P

NYR said:
This doesn't exist because Nintendo is a worldwide company - no one cares about American Football outside of Canada and the U.S. They could easily make another golf, kart, or tennis game and appeal to a worldwide audience which equals more $$$.
Click to expand...
Mexican here, i don't care about tennis, real football soccer, or baseball, but played the shit out of the mario version of those sports.

The general public loves the shit out of any sport that is given the arcadey, power up Mario treatment.
I

This actually looks great, never knew I wanted it...
H

Ok, I kind of want this now. And why would it matter if their faces are slightly obscured by their helmets? You can still tell what character they are, especially since they're color coordinated.
Z

I'd be styling on everyone with Waluigi.
M

This would be amazing
P

GrizzNKev said:
There's something really unsettling about these pictures
Click to expand...
the realistic looking grass and the film grain are really at odds with everything else
U

We still should have had a Mario Bowling game for Wii. I'm still bitter about that lost opportunity.
H

Dang, now I'm disappointed since this isn't an actual thing.
B

I would buy this.
D

PSqueak said:
Mexican here, i don't care about tennis, real football soccer, or baseball, but played the shit out of the mario version of those sports.

The general public loves the shit out of any sport that is given the arcadey, power up Mario treatment.
Click to expand...
However, there is a precedent of Nintendo not releasing the second Mario baseball game in Europe because of poor sales of the first one.
You must log in or register to reply here.
Share:
Facebook Twitter Reddit Email Link
Top Bottom