Quantum Break |OT| We'll Be Right Back After This Commercial Break 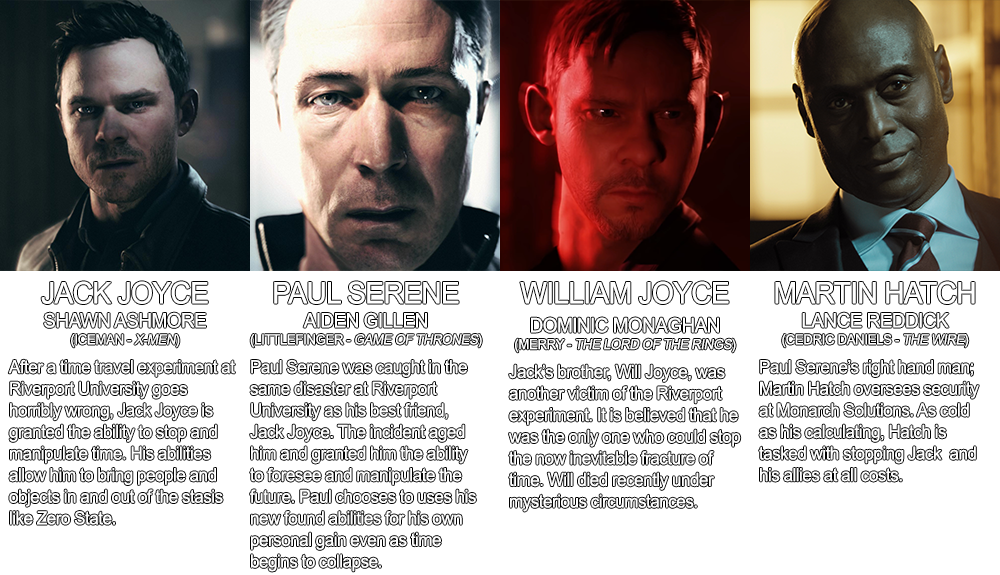 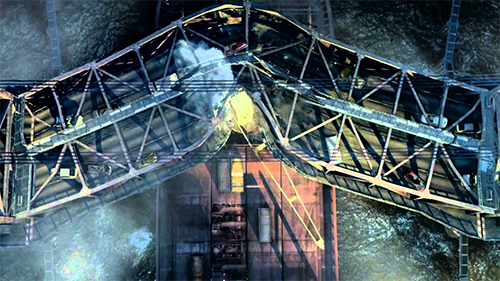 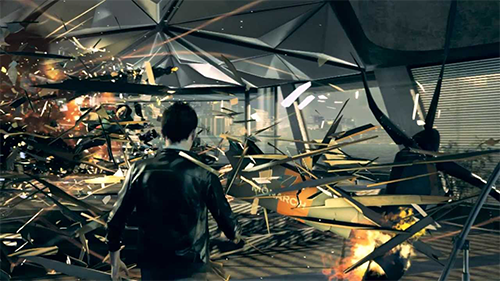 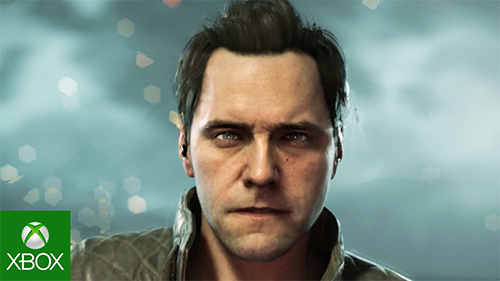 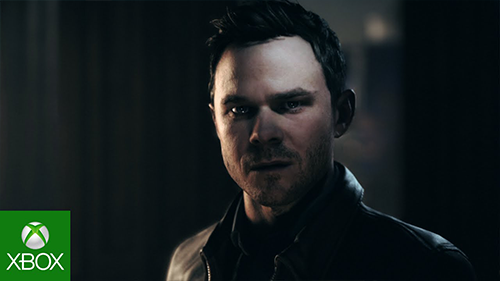 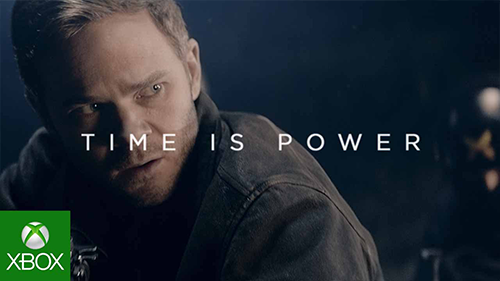 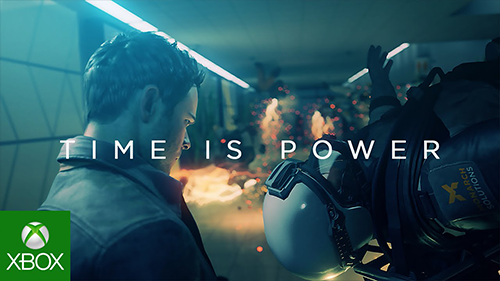 Every copy on Xbox One comes with a digital copy of Alan Wake and the two DLCs (The Signal and The Writer) on Xbox 360 which is backwards compatible on Xbox One.

Pre-orders also come with a digital copy of Alan Wake&#8217;s American Nightmare on XBLA - also backwards compatible, except in some regions (UK mainly) where it was swapped out for Kameo as the age rating for AWAN was higher than Quantum Break/Alan Wake.

If you pre-order a digital copy for Xbox One on the Xbox Store or via participating retailers you also get a free copy of Quantum Break on Windows 10.

You do not get a copy of Alan Wake or American Nightmare if you buy it on Windows 10.

Also the game is not a cross-buy title so if you do not pre-order it you wont get the Windows 10 version free, that is only for pre-orders.

When will my Windows 10 code be sent to me?

Around the launch of the game, you will receive a message from Xbox with your code in.

Can I pre-order/load the game on Xbox One and Windows 10? How big is it?

The Windows 10 version does not have pre-order/load so you will need to wait until the game has launched to buy it then begin downloading it.

Is the live action TV show included in the game download size?

No. As there are choices you can make which affect what you see in the show (with over 40 variations possible) it isn&#8217;t on the disc or in the game download.

On Xbox One you can stream the TV show when necessary or download the entire pack with all the variations, this is a 75gb download.

On Windows 10 you can only stream the TV show.

What are the specifications for the Windows 10 version?

http://www.quantumbreak.com/windows10/ or see above under "General Info"

V-Sync and G-Sync are not currently supported features on the Windows store but an updated in May will fix that, presumably Quantum Break will be updated to reflect that.

Is there anything else I need to know?

Big thanks to Doffen, derFeef, Steverulez, and @fcruzsierra on Twitter for helping me put this together on such short notice.
Special thanks to DeepEnigma for the OT title suggestion
S

Brilliant job on the OT. Can't wait to play this!!!
T

Grabbing it in less than an hour.
E

Wooooo, nice job!
Can't wait until I can play.
D

This should have unlocked by now, but I had to go out. On way back and excitement levels are high.
T

I have like.. no space free on my hard drive. Ughhhh
F

I'm really amped to play QB, but I'll have to wait until the X1 has a substantial price drop. Can't afford it at the moment
J

Bought and waiting on my Xbox !!
N

Now that name fully makes sense. It was a Remedy name all along.

Can't believe I never thought of that.

Have the XBO version preloaded, but looking forward to playing the PC version this weekend after work.

Hopefully it doesn't let down on a technical level. Weird it isn't even available for preorder on PC yet..
J

Well done OT. Any word on SLI support or is it even possible for a DX12/Windows store release?
B

I don't have an Xbox One. Preordering a XB1 disc will be cheaper than buying the digital Windows 10 version. Is it possible to do this, or will I need an Xbox One in order to get the PC code?
K

Now that name fully makes sense. It was a Remedy name all along.

Can't believe I never thought of that.
Click to expand...

Awesome job OP. No disrespect to Far Cry Primal, but I consider Quantum Break the first big AAA release of the year and deservedly so. Hopefully it sets the trend for what's to come the rest of the year.
B

bigkrev said:
I don't have an Xbox One. Preordering a XB1 disc will be cheaper than buying the digital Windows 10 version. Is it possible to do this, or will I need an Xbox One in order to get the PC code?
Click to expand...

Wonder this as well. I want the Windows 10 code, but if I'm going to end up paying the same price I might as well get a preorder in now and get both codes lol

edit: Just said fuck it and went ahead and preordered
T

Anybody who preordered digitally on xbone get the PC code yet?
D

It's the stepchild you really love, but you know, your true child is getting all the attention, from now.


sorry to everyone
E

Great info, but do you by any chance can you copy/paste the text in those images? With everything going on in the background images, it is hard to read.
M

Nice OT. I'll see if I can play at least an hour tonight.
S

Twin Tails said:
Lets do this.

Great work OP. Received the game today and installing now as I finish my second job today! Really pumped to get home and shoot some Monarch dudes.
B

want to see some pc benchmarks on this game

xxracerxx said:
Great info, but do you by any chance can you copy/paste the text in those images? With everything going on in the background images, it is hard to read.
Click to expand...

Sigh. I thought I did a better job of this than the last one I did. I'll make a text only version real quick.
K

Just started but need some advice. Had 3 enemies and just learned the RB button which puts 1 exploding shield on your enemy but you can't use it again quickly it has a timer. How do you guys deal with multiple enemies ? Just had 3 enemies. Used time shield to kill 1 but afterwards couldn't use it for a bit and the others got a bit tricky had to deal with them without using any powers.

Edit: nvm just figured it out. LB+RB from time to time solves it.

Wow the gameplay is so much fun. The time breaking down, the flashbacks and such within the gameplay my god. STUNNING.
A

After that Jack Choice talk, I coulda sworn your post said "lead name designer" the first couple of times I read it
V


And you chose the awesome title from enigma!!


Can't wait to get going on this tomorrow!!!
S

It's hard to believe it is almost here. I still remember my initial disappointment in it not being Alan Wake 2 back at the unveil. I remained excited regardless as Remedy is my favourite developer and here we are.
Mere hours, ahhhh.
P

Nice job OP. It seemed like no one was going to bother making this thread and you did a great job. Props!
V

Can't wait to check it out tomorrow morning!

Microsoft you better give me my PC code ASAP
X

The Flash said:
Sigh. I thought I did a better job of this than the last one I did. I'll make a text only version real quick.
Click to expand...

Sorry bub, it is just hard to read stuff over a busy background. You can just throw the text-only version in the OP under [email ] tags to hide it.
A

Amazing work with the OT Flash nice work, I can't wait to play this game only 4 hours more for the release date right? for the digital edition of course
K

but why isn't your game called Jack Choice to complete the remedy trilogy&#8482;

is this what it feels like to grow up
Z

My body is ready. Great work as always The Flash.
D

Really enjoying it so far and the story is intriguing but it's too early to judge, don't miss out on the TV in the beginning of the game,
in the camp.
It is worthy of your time. Since the OT is up time to put this Alan Wake and it's DLC to good use, great work on the OT by the way!


ModBot said:
Instructions for participants:
I am giving away Alan Wake + DLC's. To enter this giveaway, send a PM to ModBot with any subject line. In the body, copy and paste the entire line from the message below containing the game you want to enter for. Confused? Watch this GIF tutorial or ask for help.

ModBot Basics:
- I really appreciate thank you messages, but please send them to me (Death Metalist, not ModBot!) via PM instead of in thread.
- Do not trade keys you win off-site to enrich yourself. Don't try to claim a game you have no interest in collecting or playing. Don't claim a game to give them to friends off-site.
- If the key is already taken you will not receive a reply. Replies may take a minute or two.

Rules for this Giveaway:
- This giveaway is a raffle. The winners will be selected by random draw 24 hours after the draw was created. Any games not claimed after that point will be given away first come first serve.

Just finished Act one and it was damn good.
K

Wooo can't wait!!! Awesome OT
You must log in or register to reply here.