Rhythm Tengoku: The Best+ |Import OT| The music plays on and on 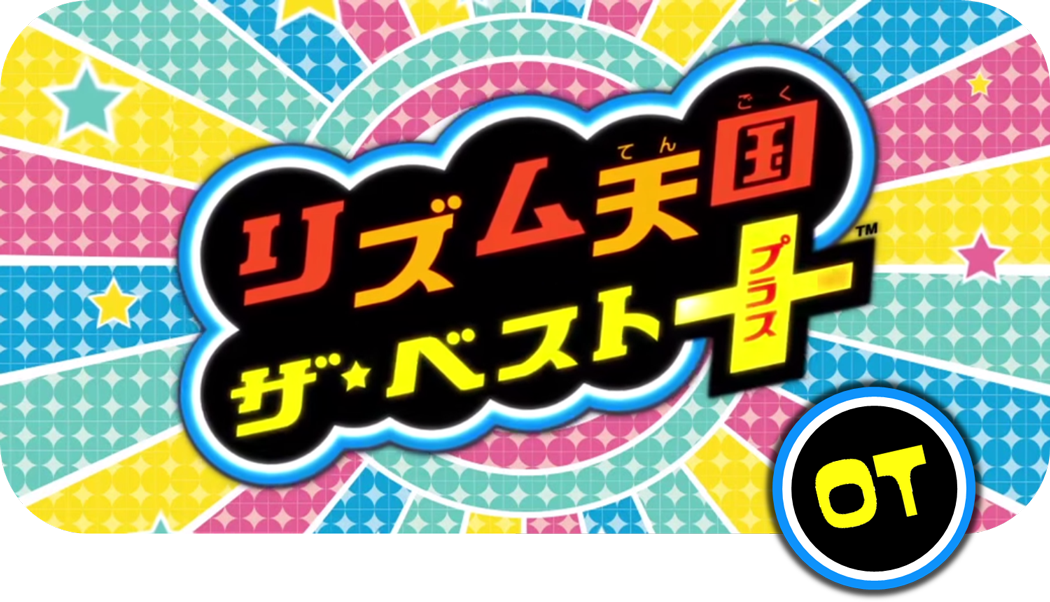 The latest entry in the Rhythm Heaven series finally arrives! From the development team behind the WarioWare series, and Tsunku (&#12388;&#12435;&#12367;&#9794, producer and composer behind groups like Morning Musume, the Rhythm Heaven series (Rhythm Tengoku in Japan) are collections of easy-to-play minigames in which you simply press buttons in rhythm according to visual and audio cues. The series has gained a following for its fun gameplay, catchy tunes, and cute art (courtesy of Nintendo's Ko Takeuchi), and Rhythm Tengoku: The Best+ is the most jam-packed game yet! 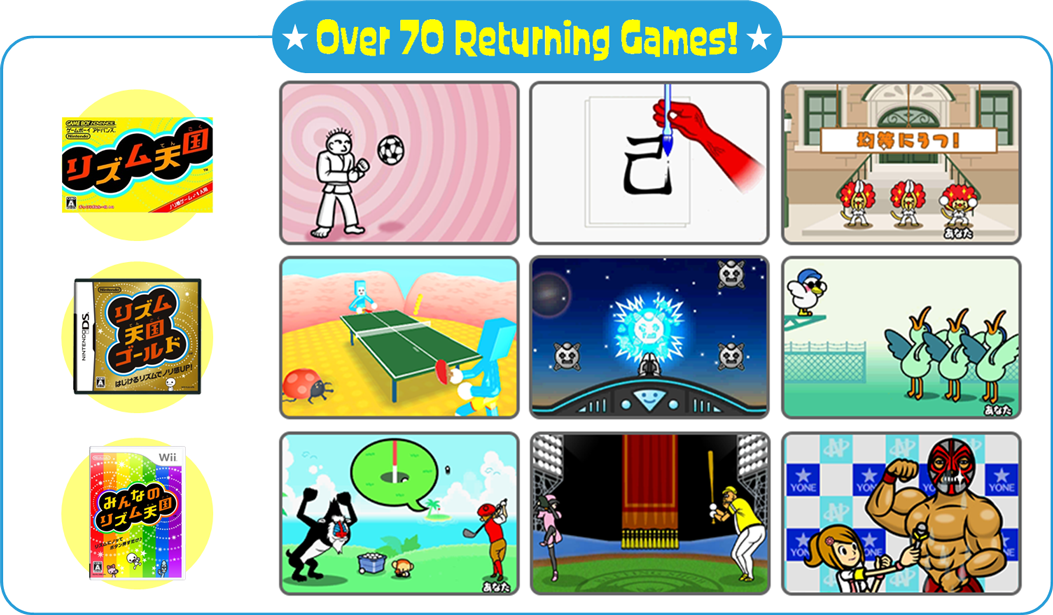 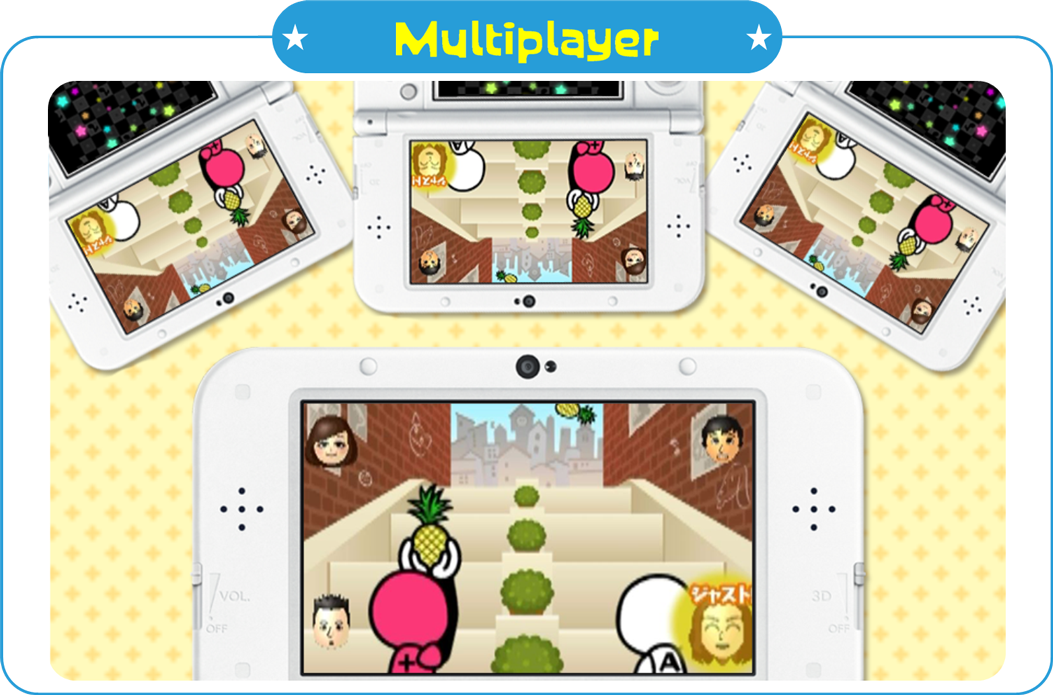 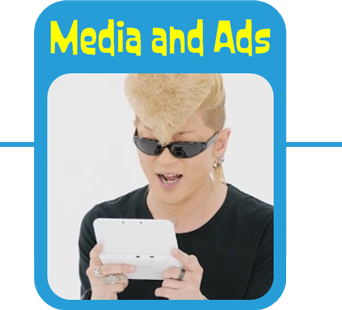 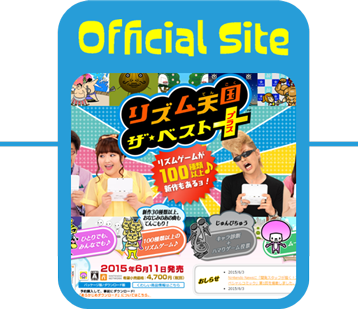 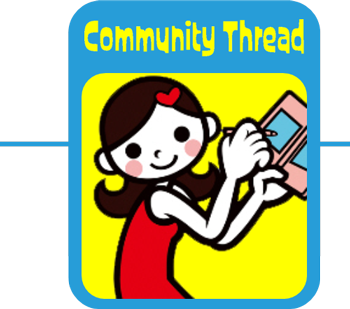 Q: Is this game going to be localized? If so, when?
A: The big question on everyone's mind! I wish I could say that the game is decidedly coming West, but as of yet, there's no confirmation. However, I can say, personally, that I'm nearly certain the game will be coming Westward next year, if not this year. Just keep your ears open and watch this space for more info as it comes.

Q: I don't want to wait for a localization, but I don't have a Japanese 3DS! Is there anything I can do?
A: This thread may be of interest to you.

Q: How friendly is the game to people who don't understand Japanese?
A: Based on previous games in the series, it should be very friendly, though it may take some fumbling around in practice to figure out the instructions for each game. Still, plenty of people here should be happy to help should you need assistance translating anything. Hopefully, I can post some translated resources once we have menus and whatnot available.

Q: Does this game use touch control like the DS game?
A: Nope, not at all. Everything is controlled with buttons, including the returning games from Rhythm Heaven DS.

Q: Which games from previous versions are returning?
A: Here's a list of all that have been shown thus far. I'll try to keep it updated once the game releases.

Q: I've played, like, a million games, but haven't found a single remix! What gives?
A; Keep playing!
H

my hope for a localisation is nonstop
K

Anyone know if Drummer Duel (I think that's the name) from the DS game is back? If so I won't be able to get a superb on everything.
K

My japanese copy is on the way! Can't wait, I'm a huge fan of the series
H

Has it been confirmed that the game unlocks at 11 pm JSt? First party titles are usually available at 10 pm.
Z

Hoping we'll get an announcement at E3 next week.

Probably gonna have to force myself from watching videos so I don't fall into the trap of rewatching them over & over, then ruining part of the fun of discovering the songs in the game itself.
R

I am so jealous. I wish I could play this game, but importing is a big no for me ;_;

Anyways, for those who are importing it: Have fun!
Z

Ringside confirmed. All is right in the world.
S

nice, i'm jealous.
might be a blessing that i won't get my hands on it since i'm terrible at these games.
S

Copy shipped out this morning. Haven't been so excited for a game in some time, mostly because I barely ever import, and I LOVE Rhythm Tengoku. I'm psyched to share impressions once it's here in a few days!

Also there better be a localisation announcement at E3. I can't read much Japanese so I miss a lot of the witty writing. Will absolutely buy twice.
K

Neat, so excited for a new Rhythm Tengoku.
If there is no news for a West release by the end of E3, I'm going to import this baby.

Hasemo said:
Has it been confirmed that the game unlocks at 11 pm JSt? First party titles are usually available at 10 pm.
Click to expand...
aww cripes, i actually meant to enter midnight and screwed it up, lol

If it's 10 PM, I'll change it to that. I have no experience with preloading, just remembered the eShop updating at midnight.
T

Got this preloaded and ready to go.
Does this unlock tonight? I am really bad with region timing.

Edit: Duh, should have looked at the last question.
Will play it after work.
S

So hyped! This + DBZ makes a good month for 3DS.
T

Basically, how I think it's gonna go down as far as the localization goes is either:

Announcement at E3 -> possibly releases this year, maybe next year
No announcement at E3 -> yeah it's probably releasing first half next year
Live in Europe -> enjoy Walk the Walking Talk the Talking Rhythm Paradise Collection Bros in 2018
i'd actually be really surprised if NoE gets it so late again
But I really don't see the game sitting alongside Band Bros P and Culdcept as an unlocalized first party game. The previous two games in the series both made it over, and I'd imagine that if it wasn't a GBA game releasing in 2006, Tengoku woulda made it over too. So it's just a matter of when, imo.
Z

Plus one could argue that a decent amount of the localization is done. Sure, they have to translate the text, but it wouldn't be much, plus most of the songs are already dubbed, and out of 30, I don't think TOO many would need English voices.

.........but it would be nice for them to go back & redub certain songs *COUGHPOPIDOLCOUGH*

Wonder if Love Lab will return, but I imagine it wouldn't work as well via button because of the shaking.
P

I'll buy this on my JP 3DS if there's no word next week about localization. I'd rather have it on my NA 3DS plus it'd probably be way cheaper here.
P

Awww man!!! The game unlocks in 13 minutes? I left my 3DS at home thinking it unlocks tomorrow 6/11. I'm going home on my break!

God damn I need this in my veins. I'm still so sad that I'll never get to play Band Brothers P

I know this is unlikely, but I hope the love potion game from the DS Rhythm Heaven is in the 3DS version. That song is so catchy!
M

Alright, is the game unlocked? Did I get it right this time, lol
P

The Bankslammer said:
Alright, is the game unlocked? Did I get it right this time, lol
Click to expand...
I wanna know too!!
T

I see pics of the game being played on Twitter. Get to it, everyone!

Post lots of pics and impressions for poor lil me who can't play the game til I get back from work!
T

The Bankslammer said:
I see pics of the game being played on Twitter. Get to it, everyone!

Post lots of pics and impressions for poor lil me who can't play the game til I get back from work!
Click to expand...
Same, but I will enjoy it.
I hope they mix up Built to Scale because that game is tradition now.
M

Play-Asia mailed my copy yesterday. I'll be bringing it to CEO in Orlando!

I hope this game is confirmed in: https://vine.co/v/M22ttE9WdYY (turn sound on)
S

Mrhorseshoe said:
Play-Asia mailed my copy yesterday. I'll be bringing it to CEO in Orlando!

I hope this game is confirmed in: https://vine.co/v/M22ttE9WdYY (turn sound on)
Click to expand...
Toy Boxer? Pretty sure it's in.
Z

Yeah, I saw a 2-player version of it, so I'm sure it's returned.

Yup, it's back, I see pictures of it on the official site.
T

The First song is in English, ha ha.
T

I've got a list of the games I've seen thus far in the FAQ.

Also, here's a stream courtesy of a buddy of mine.
S

The First song is in English, ha ha.
Click to expand...
The work is already done for you, NOA/NOE!

(This song is so cute)
T

Choir Boys is back! Yes!


Have not seen Built to Scale yet, hopefully it is toward the end.

Also the stream seems to be right before Remix 3.
R

I played through the first four minigames (so just the first area). It is more story-heavy, so there's quite a bit dialogue in this. Personally I don't like that so much, but the characters are pretty cute so I'm not sad about it. There looks to be a number of unlockable stuff in the Barista's area, so looking forward to hopefully a lot of content here.

As far as other things, the 3D is solid and it is nice that you can see your timing on the bottom screen.

"I'm a lady now" is actually pretty fucking amazing. I looove it.

rpmurphy said:
Oh and
Ashley
cameo! Nice touch.
Click to expand...
omg something about this excites me.

Waiting for US announcement before I import. If the US version somehow had the Japanese version on the cart...
T

Oh nice, the stream confirms you aren't gridlocked into completing remixes to access the mini-games.
My biggest complaint fixed!
Z

I want this so badly. Hoping for a E3 miracle...
S

Air Boarder got a new art style. Nice that it became a main mini-game.
The song sounds the same though, so wonder if they will use the same US song if localized.

Also a huge improvement is the tutorial will show you the beat if you screw up during tutorials.

Game is fun as ever, but I'm really not digging all this text dialogue. I preferred the GBA/DS versions with..... no story text.

The Sumo Brothers song amuses me to no end.
This might be top 5 material for me.
B

Yes!
I'm crazy into this.
For show.
T

Will buy the very second it gets released in NA. I love Rhythm Heaven so much, it genuinely makes me happy.
T

The Remixes from what I heard have been really good.
Ugh work!
S

The First song is in English, ha ha.
Click to expand...
I watched only the first 30 seconds and I'm already in LOVE with this game! NOA, please announce during E3! I will buy this Day 1!
T

ShadowElliot said:
I watched only the first 30 seconds and I'm already in LOVE with this game! NOA, please announce during E3! I will buy this Day 1!
Click to expand...
Indeed.
Watching a stream of the game and since it has an actual story now, this one begs more of a translation than the others.

Edit:
After watching the stream, I got an idea of how it works.

You go stage to stage by completing mini-games. You get to the final area where each tower is like the older games with 4 games + 1 remix. You can choose any tower at any time.
So you are never blocked from content by failing a remix which I like.
L