Rumor: Syphon Filter 4 & God Of War 4 Set To Be Announced In Febuary


I really hope Sony announces a SF for PS3 soon and hopefully by Bend!
E

SkyMasterson said:
Well better them than the other rumored team to be working on it *shutters*


I really hope Sony announces a SF for PS3 soon and hopefully by Bend!
Click to expand...

But Bend studio has been working on Uncharted:GA the past year, I doubt they were also doing SF4 simultaneously unless they're a big studio, which I don't think they are.
A

Fantastical said:
My god that red is bright.
Click to expand...

This gen needs more stealth, and Sony happens to have a decent franchise to deliver it.
Click to expand...

That is what I meant to say.

In fact the entire stealth genre has gone downhill. The early Splinter Cells, MGS3, Thief, etc... what happened? Were sales bad? Or does COD really have that large of a gravitational pull?
V

Is it a PR only event or also open to media?
M

If you have any worries about whether Santa Monica studios are currently working on the next installment in the God of War series or not, put your worries to rest. God of War 4 and a new Medal of Honor game are coming in the near future. How do I know? Look below. 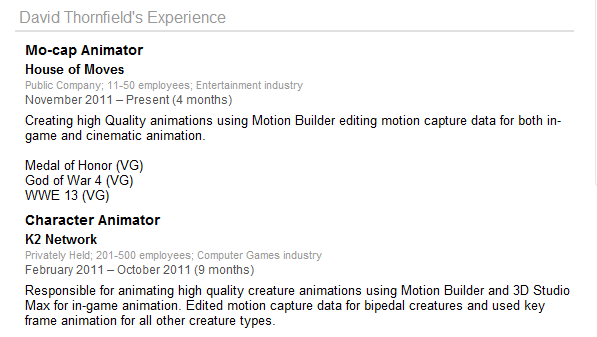 This is from David Thornfields linkedin profile who is a mo-cap animator at House of Moves. He is Creating high Quality animations using Motion Builder editing motion capture data for both in-game and cinematic animation for God of War 4, the next Medal of Honor and WWE 13 since November 2011.

The only question is: when will Sony officially announce the game? Every major God of War game get released in March, so I would say, maybe next month GOW4 will be officially announced. If not, at this years E3
Click to expand...

I love resume leaks. They're always legit and no one ever seems to get in trouble for them.
B

damn syphon filter used to be my favorite ps1 game. although i never got past the first snow stage.
Y

I'm sure you found that on your own VGArabia.
H

Wait, what happened? The Syphon Filter rumor was a bust?
Z

JJD said:
Wait, what happened? The Syphon Filter rumor was a bust?
Click to expand...

To me it seems more likely that its coming now.
J

Loudninja said:
To me it seems more likely that its coming now.
Click to expand...

That's good to know! The only leak yet from the Sony event has been the LBP racer?
R

I think Syphon Filter 4 would be a Vita game.

Vita needs it more than the PS3.

Looks like the guy updated his LinkedIn profile and removed the three game listings. Now it lists 'Unannounced' in their place.
T

Ugh, damn. A small part of me was still hoping that this game was just rumors. Now it just seems like an inevitable reality. Who knows... maybe this title will be radically different with a new mythology -- I wouldn't count on it, however. At this point, I'd like for them to hold off the announcement until E3.

Almost time to put this rumor to bed. We have only three days left in the month of Feb.
R

Cyber Caesar said:
Almost time to put this rumor to bed. We have only three days left in the month of Feb.
Click to expand...

My body is ready!

One can only hope. One week to find out :/

Please be Vita game
Ok Gaf, hate me
B

it's okay, i wouldnt complain either.

i'm ready for some new god of war. bring it on, sony santa monica!
T

That's not quite the God of War font. But by body is ready anyway!

The URL of the image on that page:

PuppetMaster said:
The URL of the image on that page:

Yeah, I saw it when I downloaded the images but don't know if its something of facebook or of the image.

Yessssssssssss. GoW IV for PS3 please. I am ready.
You must log in or register to reply here.

Mar 11, 2021 started sxodan
Mar 12, 2021
LittleWing
Opinion Are we really never going to see Sony develop another SOCOM U.S. Navy SEALs? Not even an HD remaster of SOCOM II for PS4/PS5?