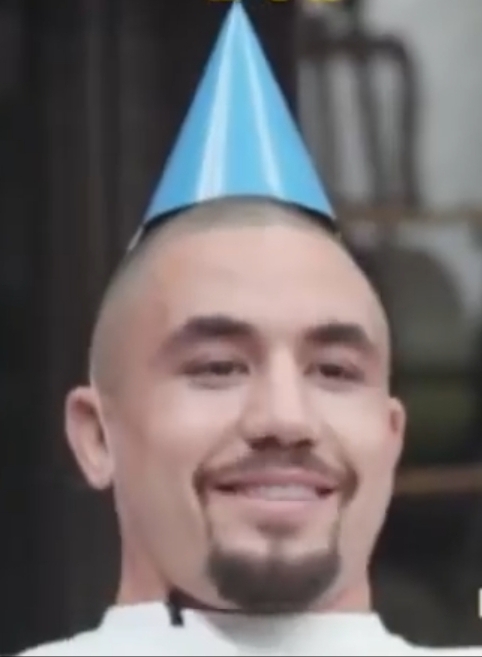 65 to 9 head strikes and Cannonier raising his hands after the fight lmao. That was a one-sided beat down.
Reactions: Cunth and Ornlu

Nice performance from Rob. Almost ate it at the end there though.
Reactions: Unknown Quantity

Reactions: GymWolf, Butch_0451, KingdomHeartsFan and 4 others

Someone in Yas Island is puffing Justin's pillow ready for the inevitable.

What is this gay arse music
Reactions: Ornlu

Love this song. Is this Beyonskov?
Reactions: Thing on a Spring, Ornlu, McCheese and 1 other person

somebody start a fight or something

Bruce getting paid
what a man what a man

Dominant round by Khabib, and mostly on the feet to boot. Justin already gassed, that doesn't bode well for him.

Shit this fight is intense. Round 1 to Khabib.

Khabib's round easily; Justin landed some sick kicks and a couple hard shots to the head, though.

God damn that was pathetic

Holy fuck Khabib is an animal.

That triangle was so beautiful
Reactions: Ornlu

Get your eyes checked, ref. Justin was in over his head, looked out of sorts in there.

Nobody is beating Khabib. Everyone shits their pants when they get in there
Reactions: El Pistolero and d[-_-]b
D

MastAndo said:
Dominant round by Khabib, and mostly on the feet to boot. Justin already gassed, that doesn't bode well for him.
Click to expand...
you saw him gassing too? I thought I was mistaken.

notseqi said:
you saw him gassing too? I thought I was mistaken.
Click to expand...
For sure, he was huffing and puffing as the round was ending.
Reactions: notseqi

MastAndo said:
For sure, he was huffing and puffing as the round was ending.
Click to expand...
I didn't see Khabibs level of exhaustion from that 1st round camera angle, that's why I was asking. Thanks dut.

I think the nerves got to Gaethje bad. Looked lost in there.
Reactions: bonk64

Somebody nerf him.
Click to expand...
He's gonna get BoP'd for the next fights. Mask or weights.

Well it will be interesting the amount of $$$ required to bring him out of retirement, or he keeps to his word.

Normally this last fight stuff is about getting a better contract, but with Khabib you can't be sure - guys pretty stoic and without his dad, maybe he's done for good. Dana must have just pooped himself a little.
Last edited: Oct 24, 2020

He did that to Gaethje, wrestling on a different stratosphere. Was worried about his mental state. Damn. Sorry to see him go.

Holy shit he is retiring
D

Somebody nerf him.
Click to expand...
Retirement nerf.
Reactions: Thing on a Spring

Justin seems like a solid dude. He really is just a fighter for hire. He's in there for money so he's gonna throw his fists around and whatever happens, happens.

Welcome back Conor
Reactions: bonk64, Cunth, Biff and 1 other person

mekes said:
Welcome back Conor
Click to expand...
More motivation for him to beat Poirier (won't be easy). Chandler & Tony in the mix & Islam will join em next year. Lightweight can go anywhere. I don't see a dominant champion type.
Reactions: mekes

What an emotional fight, even from the beginning of the fight you can tell Khabib had so much stake even he was nervous. Justin did pretty well as far as keeping Khabib in check at least until he was forced on the ground. He kept talking about his defence wrestling, he probably could've done more. But what an animal Khabib is, he's just too strong.
Reactions: Unknown Quantity

So now we know what the tape on his toes was for.

Retiring in his prime. Damn.

I understand the family is hurting but maybe his mother will reconsider over time. A GSP-Khabib payday would be worth like 1% of Dagestan's GDP lol.
Reactions: Ornlu

Dana weeping over losing his cashcow out of nowhere.
Reactions: Krappadizzle, Arkam and bonk64

Dude let it all out there at the end. Must have had to deal with so much pressure on top of his father dying
Reactions: Euclid's Bendy Water, Butch_0451, Unknown Quantity and 1 other person
You must log in or register to reply here.
Share:
Facebook Twitter Reddit Email Link
Top Bottom