Which I would agree with except after seeing what Sony is selling a basic SD card for, I would not say it is a given especially if Sony is selling the console at cost or taking a loss per unit.
W

Dark_AnNiaLatOr said:
That's not a controller every person that's playing has.

That's why they don't even sell them seperately.
Click to expand...

Lol what? So only one person can use the tablet-like-controller?
B

Yeah, the DS3 must have been cheap as heck to make since it was basically the same tech since the DS2 (which also had few changes from DS1).

So adding a bunch of new features wouldn't make it terribly expensive I think.
F

I just want one a little more bulkier than the DS3 is. My main issue is that with the PS3 controller it always felt like it was "resting" in my hand while with the 360 controller I was actually 'holding' onto something.

And people asking for the sticks reversed ... I'm fairly certain it's just a preference, it's not "OH SHIT! I can't play gamez now!". I just like the 360 layout more, I still have owned PS1, PS2, PS3, and will own a PS4 regardless.

I really like the look of the new controller though, it seems like something I can 'grip' more-so than something I need to have 'rest' in my hands.

I'm guessing we'll see something like this on the controller as well....if it's not an OLED, that is......
Click to expand...

That would be cool...

^nice
I like how the gloss finish extends around the buttons and d-pad.

With regard to the prototype: The touch portion being gloss, with the adjacent regions matte, looks a bit "busy" to my eye.
B

waypoetic said:
Lol what? So only one person can use the tablet-like-controller?
Click to expand...

I think Iwata said two at the same time are possible but any more than that, don't even think about it. However, right now, you can't get an extra pad.

quest said:
I just don't see how I can use the touch pad with out putting the controller on my lap. If games use it I might be out next generation. They should of over hauled the controller if they wanted to add a touch pad. This would of been a good time to fix the ergonomics of it. Looks like the most uncomfortable controller ever if you need to use the track pad in any game.
Click to expand...

Let's hope the touch-pad can launch a spell-checker
D

It's not actually a screen is it? Just a touchpad surface I thought.

Edit. That's obviously a shop guys. I think you know though.
R

Oh fuck this is cool.

Besides the reports of the touchpad being "clickable", that would be perfect.
D

if its a touchscreen, it has to be OLED
P

Yeah, I think Start, Select and PS-button look out of place. And I'd rather have this Vita-like touch-field design with the small PS-symbols on it. Very subtle.

This is nice, but personally I want them to get rid of any ridges or hard edges or anything like that. Needs to be a touch more organic and ergonomic.
W

OH YES! I would LOVE that.
R

dallow_bg said:
It's not actually a screen is it? Just a touchpad surface I thought.

Edit. That's obviously a shop guys. I think you know though.
Click to expand...

The shop us based on touchpads that are on Sony's Vaio laptops. They have icon shortcuts that become illuminated when they can be used.
V

So let's see, we have the likely unveiling on the 20th, does anyone think this was really an accidental 'leak'? It was a controlled leak to get the forums and media all frothy.
This is essentially the teaser trailer before the full blow preview.
Click to expand...

BloodMoney said:
i'm simply pointing out the obvious
you appear concerned that someone (me / logic) defines such leaks as theft.

if i didn't like leaks, i wouldn't be on gaf.
if i defended them as acceptable practice, i'd be an idiot.
Click to expand...

Ok lets get to the bottom of this. 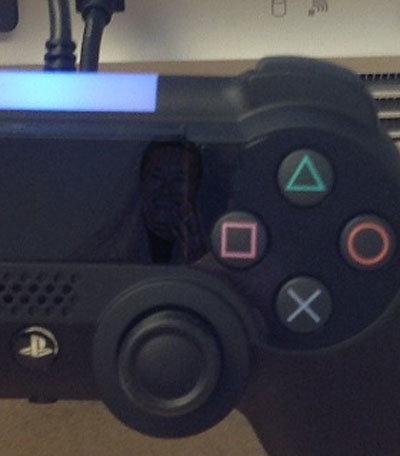 RoboPlato said:
The shop us based on touchpads that are on Sony's Vaio laptops. They have icon shortcuts that become illuminated when they can be used.
Click to expand...

An, that's interesting.
B

Violater said:
Ok lets get to the bottom of this.

that was good, lets be friends.

Violater said:
Ok lets get to the bottom of this.

RoboPlato said:
The shop us based on touchpads that are on Sony's Vaio laptops. They have icon shortcuts that become illuminated when they can be used.
Click to expand...

Oh so they do have tech like that? When I saw the kind of touch pad was, it really looked to me like what you described (had a screen like surface). That would be very cool.
J

I can deal with this.
W

ManUtdRedDevils said:
Which I would agree with except after seeing what Sony is selling a basic SD card for, I would not say it is a given especially if Sony is selling the console at cost or taking a loss per unit.
Click to expand...

EagleEyes said:
It is great. I'm not trying to be negative on it at all cause I can definitely see myself using it. But at the same time it pretty much confirms that the PS4 will be coming with the dual cameras as a pack in as they wouldn't just provide the motion controller without the cameras. It also pretty much confirms that the PS4 will have just as many "gimmicks' as the other consoles will have. Sony won't let developers just ignore all this new tech they've put in the controller either because unlike the Move this is not an add on, this will be in every PS4 sold. And to be clear, i'm not trying to be negative as i think all this new stuff is great for both the new Xbox and PS4 but the reality is that both of them are going to a lot more similar then people think.
Click to expand...

fair points but the differentiating factor Sony has imo is a higher amount of strong first party studios. so it will come down to games (which is great) rather than gimmicks, social media integration, or other entertainment media integration.

i can also see a possible partnership with android or apple to have apps available on psn. with the touchpad all those apps will now be playable as if it were on a touch device.

Not that I have seen, nice scoop. Where is it from?

Analogs are clearly still convex in the centre but with a lip all around the edge.

Deffo the Vita D-Pad too.

From that angle it looks nearer final that the first one too even though it's still the same one.
J

Man, you are seriously skilled. Do you do this kind of thing for a living? That looks amazingly professional.
R

Nope, that's new. Looks even better at that angle. You can clearly see that the handles are longer. Too bad we still can't see the triggers.

Not sure if I like those longer handles
D

Nice find, looks much better from that angle.

DBT85 said:
Not that I have seen, nice scoop. Where is it from?
Click to expand...

I've found it on an italian videogame's forum. But I didn't know the source.
P

That's clearly a headphone jack
B

That looks very nice indeed.
B

That looks a lot better than the first leaked image...
Is this real, or photoshop?
K

Fuck I would cream my pants if it actually has 3.5 mm audio jack built in.

I usually play late at night when everyone is asleep so this is HUGE. Please Sony, DO IT.
You must log in or register to reply here.